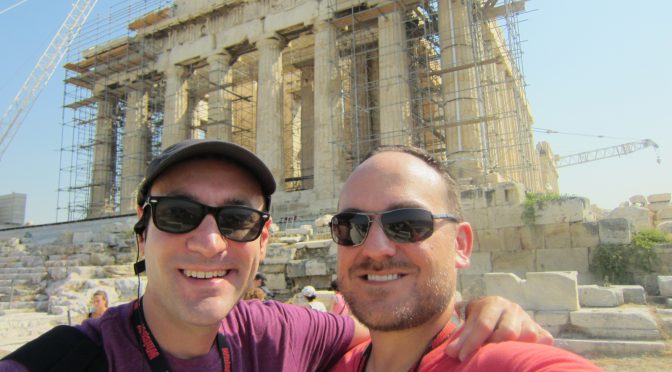 The Birthplace of Western Civilization!  The Parthenon!  The Acropolis! Needless to say, I was extremely excited to see Athens.  Along with the Hagia Sophia, The Parthenon was another building I’ve imagined visiting my entire life and this trip was going to help me fulfill that check box. SWEET.

The morning of our arrival in Athens, we woke up already there.  It was interesting to find ourselves already in a brand new place and really not have a clue where we were.  At the time, I didn’t think you could see Ancient Athens from where we were – I discovered I was wrong, after getting back from our excursion.  The port for Athens is known as Piraeus and it would be like driving from Long Beach to Downtown LA in terms of comparable distances.  The first order of business was a bus ride along the Piraeus coastline along with commentary from our tour guide, who knew the ins and outs of Athens, that’s for sure.  I couldn’t tell you much at all about what I saw writing about it nearly a year later.  Luckily I’ve captioned most photos as applicable.

The approach to Athens clearly indicates that it’s basically just another big city, much like you’d see in the U.S. or in most parts of Europe.  It’s not particularly picturesque and kinda pedestrian, if you permit my blase attitude.  Only when you get close to the ancient areas do you start to see the “money shots” if you will.  Once in the downtown area about 45-60 minutes later, you can start looking out the window and having your mind blown.  The ancient quarter is awesome.  The Acropolis is truly a sight to see, and can be seen from miles away, as it is a big hill crowned with ancient historical buildings.  Throughout the rest of the city are scattered other majestic sights, like ancient Olympic stadiums, ruins of temples, amphitheaters, other historical hills….you could probably spend another day enjoying the sights.  At a leisurely pace.  Beyond that, Athens is a typical bigger-than-medium dirty city.  Nothing wrong with that, but it kind of clashes with the other island-ic parts of Greece where it’s quaint and staggeringly gorgeous (see Santorini and Mykonos).

After getting driven around the ancient part of the city, our walking tour of the Acropolis began.  As it also did for THOUSANDS of people.  It’s not surprising this is a hugely popular place to go.  Yet when it’s balls hot outside, the last thing you want to do is be crammed with every other foreigner and move at a snails pace.  Alas, that is the price to pay to experience the divine.  🙂   You basically queue up in a long crowded line up the steps of the Acropolis, funneling through a central ancient gate that then opens up on the expanse of the Acropolis proper.  It’s a fantastic view though, as you go ever higher and get an ever better view of Athens.

Our tour group at the foot of the Acropolis

You ascend a hill through lots of olive trees

This is the remains of the Odeon, which at one point used to have a roof

Larry & the Odeon; the extreme closeup because of the sheer number of people on the path

On the hill behind the Odeon is the Philopappos temple

Looking up at the Acropolis walls

The Temple of Athena Nike from below, which is on the Acropolis as well

Lots of people want to see the Acropolis. Lots.

The main staircase that leads up into the Acropolis

From the stairs, you can see the whole of Athens

The Propylaea, the unfinished and ruined gateway to the Acropolis

All throughout many of the Greek monument areas, there were dogs wandering about

Looking towards the Philopappos again

The Temple of Athena Nike again, next to the gateway

Looking down the entry steps

The view through the Propylaea as you enter the Acropolis

Impressive still after all these years

But yeah, once you get through that gate, that’s when it was all worth it….as there’s the mother-bleepin’ PARTHENON.  It really is staggering and impressive and not-at-all disappointing.  It is sad to see the condition it’s in, but if you read up on the history of the building (which is entertainingly told in “The Secret Lives of Buildings”), it’s amazing there’s anything left of it all, what with all the explosions that have taken place in it.  Larry & I walked around the site, taking it all in.  At least up here there is room to breathe even if it’s still crowded.  Yet it was really really hot that day (go figure, it’s hot in early September in the Med!).  We only had so much time and then it was time to rejoin the group bus, as we then were headed to the “tourist” quarter called the Plaka.

The One and Only Parthenon!!!

But there’s what everyone comes for: the Parthenon

Looking back towards the entryway to the Acropolis

Us, the Parthenon, the crowds, and the heat

The Parthenon is constanly being preserved as it is constantly deteriorating

Once a temple to Athena, then a church, a mosque, and also a weapons storehouse

Unfortunately when the Turks made it an armory, the British shelled it and blew up all the ammo within

A better view of the Odeon

The ruins of the Sanctuary of Asclepius

It was always deteriorating, but the Turkish ammo blast took out the entire midsection

Still, there’s a lot to see, but the Greeks have wisely taken artistic elements and stored them

That’s the Theater of Dionysus, and the New Acropolis Museum behind it

Here you can see just how much was destroyed

The rear of the Parthenon

These are replicas if visible at all. The Museum is amazing as it places the art where it would be

It was made with skewed proportions so upon looking at it from the front, it didn’t get smaller

The Erechtheum, another ancient Greek temple.

This was built by Phidias, who also built the Parthenon

Looking towards the entryway again

The female “columns” are called the Caryatids. The originals are in the museum.

The view as you leave the Acropolis

Lots of crowds and lots of heat

Strangely enough, the cover of Madonna’s album Erotica was on a tile here

As well as here

The Acropolis from afar while in our bus

Those temples in the foreground are Zeus’ temple

The Panathiniaiko stadium used in the ancient AND modern Olympics

Quite impressive still; entirely made of marble.

At the Plaka district, we were given a few hours on our own to just explore the area and buy souvenirs/crap.  It was also up to us to get some food, so Larry & I wandered into the heart of the Plaka ville and found a Greek restaurant to indulge in some touristy samplings of Greek food.  At that point, we were ravenous and the food and Greek beer were AMAZING.  After getting a bit of energy restored, I had wanted to visit the New Acropolis Museum.  The museum is brilliantly designed as it is built on top of ancient ruins where the old Plaka city used to be…but what’s cool is that the museum is literally propped above the ruins, and the floors are glass so you can look down and see where there are excavations occurring.  The museum is also situated at the foot of the Acropolis and aligned the same way as the Parthenon.  Why is that neat?  Because the museum has all the original remaining sidings of the Parthenon in order to better preserve them.  Basically, you’re seeing fake friezes on the Parthenon structure as there’s little way to protect them out in the open effectively without shutting the Parthenon down.  So you get to see the structure and a fairly idealized form of the remains, but the real stuff is in the museum.  It’s a great way to see all sorts of Greek antiquities, but don’t take a picture inside there!  NOT ALLOWED, as I found out.  Oops.  Lots of great stuff to see there, and it’s air-conditioned.  Hallelujah.  Also very interesting are the many scale models of the Acropolis throughout the last few thousand years, through it’s initial construction, it’s transition into different purposes and religions, and how it came to look the way it does now.

Plaka and the New Acropolis Museum

While there, we found a Greek restaurant and scarfed down some typical Greek gyros food

Plenty of souvenirs for everyone!

That’s the Acropolis above

An idea of what the district looked like fully intact

Thought it was cool to see the Hotel Byron!

The path to the New Acropolis Museum

The New Acropolis Museum, which is pretty amazing

It’s built above the ruins of the ancient city, which is pretty cool.

Acropolis in medieval times, around 1500 AD

Model of the entirety of Athens in ancient times

Model of Acropolis around 480 BC

The Acropolis around 1200 BC

I was very happy to have finally visited the Acropolis for myself.  It’s a very worthwhile thing to see and experience – I would like to have visited other spots throughout Athens, but honestly, I don’t feel like I missed out on too much.  Maybe one day we’ll be able to swing back through there.  After our free time was up, we jumped back on the bus and drove the much quicker highway route back to our gigantic ship.  It fairly quickly took off at that point, and from our room we could watch the whole process unfold as the ship un-docked.  There were some hot dock workers to look at too…that wasn’t bad at all.

After a drive back through Athens to the port city of Piraeus, we were back

It truly is an enormous vessel

The view from our stateroom

Looking back towards the Acropolis from our ship

If you look hard, to the right of that light pole you can see the Acropolis

Watching the ship disembark from the port

The view from our Outcast table in the dining room

Larry did like the food, I just take worst-timing pictures ever

One thing about our cruise experience itself that was a bit frustrating at first was the dining experience.  No one ever showed up to our 8-person table!  Ever.  So we were the lepers, apparently.  It wasn’t this night, but I think maybe the next when they finally sat us at a 4-person square table that 2 people could sit at and not look stupid.  We didn’t eat every night at the main dining room, but let me tell you, the food there was fantastic.  The waiters, servers, and sommelier were amazing.  A very great experience, that is for sure, once we finally got our own table.  I think it’s just that people now have different options, including other restaurants throughout the ship, along with a Flex Eating thing that sells out immediately long before the ship sails, in which it’s like a restaurant and you can eat just with your party.  I think a lot of people don’t like the idea of having to eat with the same people every night, especially if you end up hating them.  Ah well….their loss, as Larry & I are AWESOME dinner conversationalists.