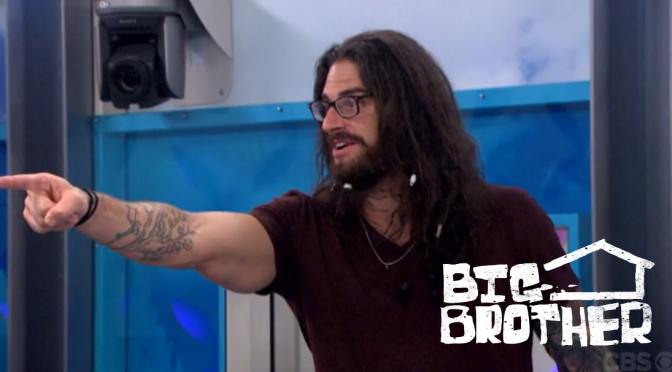 I wonder why it is that whenever I call out a player in this here blog, they then go and show me up and work to prove me wrong?  I call out Steve as being a complete non-entity in the game and then bam, he wins HoH and sends Jackie home.  Then last week, I’m like, UGH, AUSTIN, SO USELESS, and then bam, not only does he win HoH, he takes the game in a completely unexpected direction. 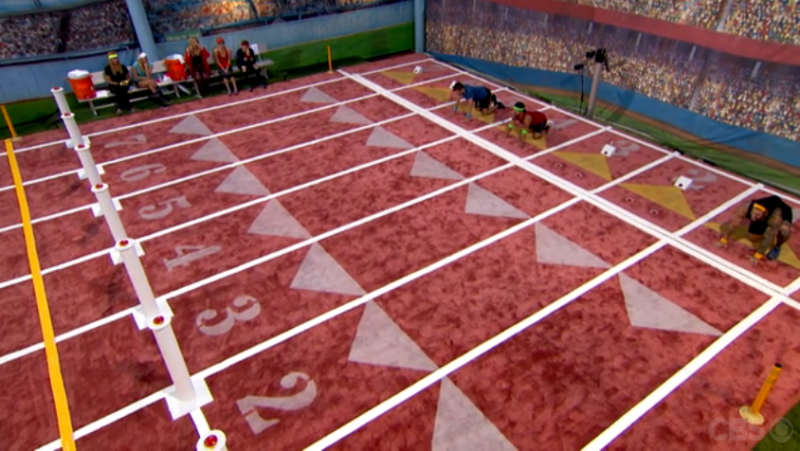 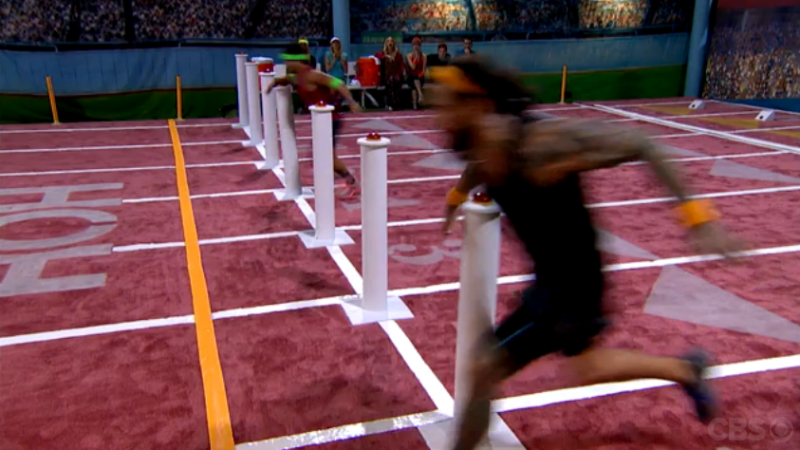 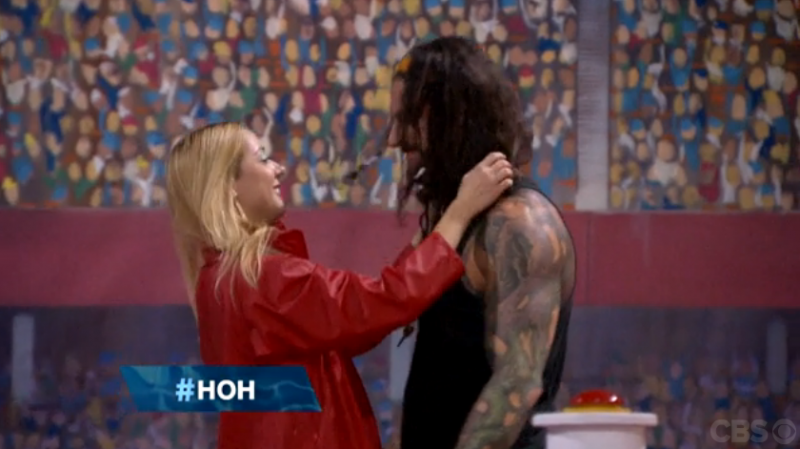 There were some false-start eliminations and some who just came in last in a heat, but in the end, it came down to James and Austin competing head-to-head for this week’s HoH.  I figured if James didn’t win it, this week would be completely straightforward as it was going to be obvious that either Meg or James was going to be sent home.  And even in their commentary during the HoH, it really felt like that was going to be the case and it was clear that Austin was going to win.  I was prepared for this week in the house to be kind of depressing as I really like Meg & James (see last week’s post).

But then, a crazy turn of events! We learn almost immediately after Austin wins that there’s ANOTHER alliance that was formed between the Austwins (btw, I love that portmanteau) and Meg & James (I’m calling it Brass Tacks as I think that’s what they’re calling themselves)!  Don’t you think that was important info to tell the audience, CBS?  I figure they weren’t sure it was an actual alliance that would last, so why bother showing it?  But it ends up being the one that Austin adheres to as he tells  Liz & Julia that he’s not putting up Meg & James at all.  Suddenly I started liking this week so much more! 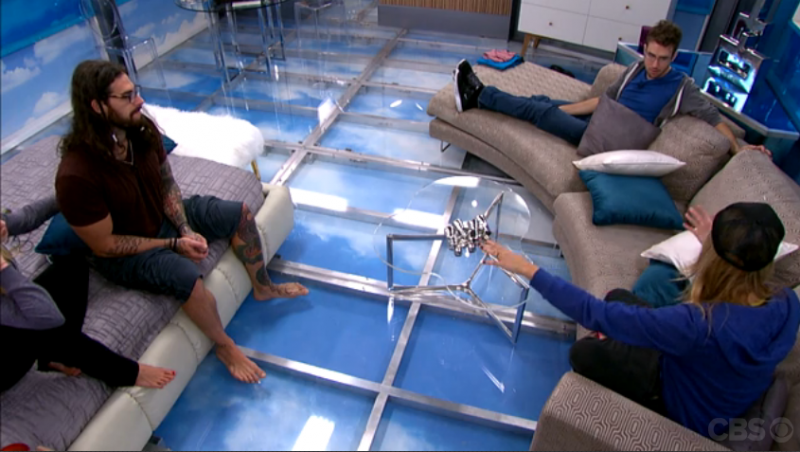 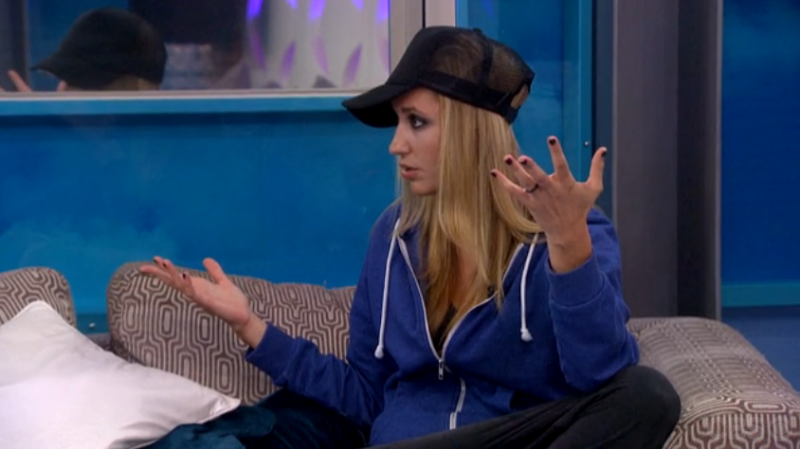 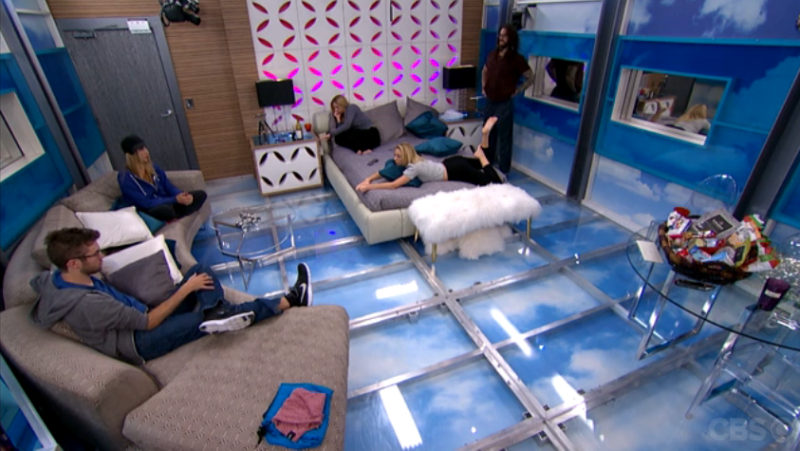 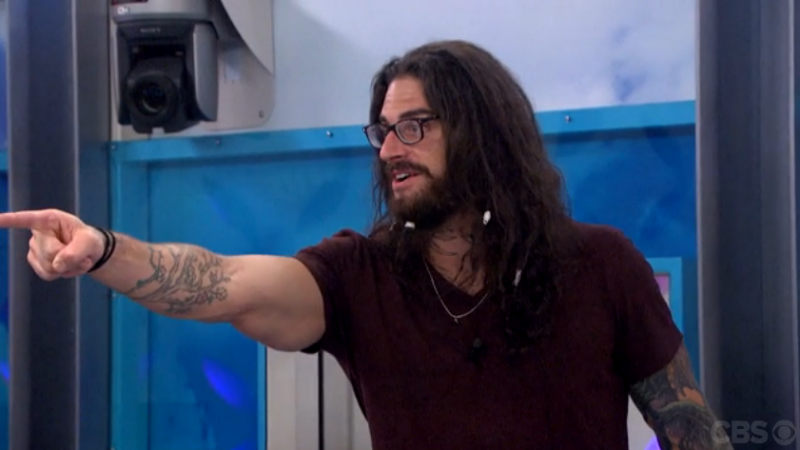 The ultimate Brass Tacks game plan is to get rid of John first…BUT if the opportunity and desire arise to target Vanessa, that’s an option that will be considered.   They believe John would have the least grudge about getting targeted if he came back in the house after him getting evicted – and they’re probably right.  He is pretty chill about things.

But then there’s Vanessa, the Queen of Playing and Plotting.  There’s the plan she shares with Austin’s Angels, which is to target Steve or John.  Austin explains away Meg & James as saying that he made a  deal with James to not target them during the HoH Comp.  Everyone seems to respect that…but I wonder if tonight a massive betrayal comes up.  They always seem to do that!

Within the Scamper Squad group (Austin’s Angels + Steve), the talk is that John is the target but a pawn is needed.  Steve absolutely fights against being the pawn which offends Vanessa, as she argues if you’re in an alliance, you should know your alliance has your back and trust it.  So no one wants to be the pawn.  Vanessa casually mentions to the group and Austin that she’s already put her game in jeopardy for Austin when she decided to save him, which was all on him.  Of course, he can’t believe she throws that in his face and when she leaves, he freaks out.

So Obviously Vanessa Is the Pawn, Right?

Nah, not quite.  As when Vanessa gets some alone time with Austin finally, he confronts her about the plan to backdoor him and she FINALLY and admittedly, wisely, confesses that she was a part of it.  This admission does seem to calm his ire towards Vanessa, as when we get to Nominations…. 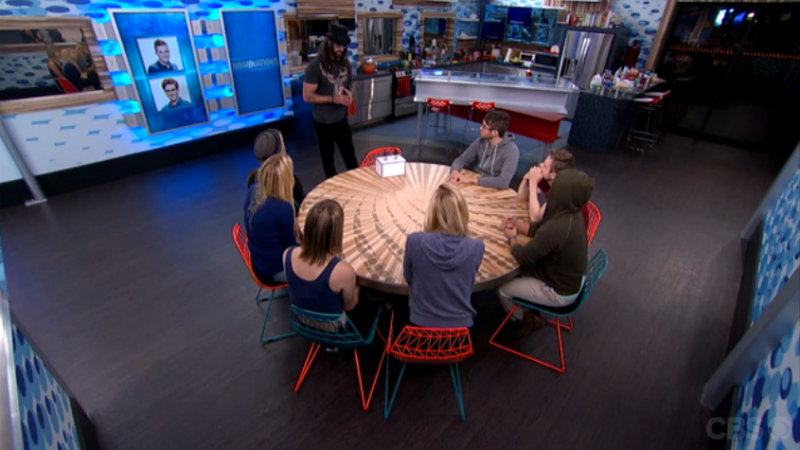 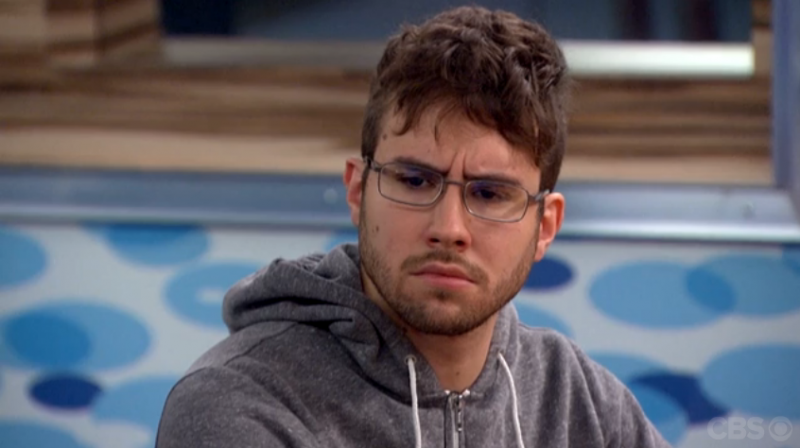 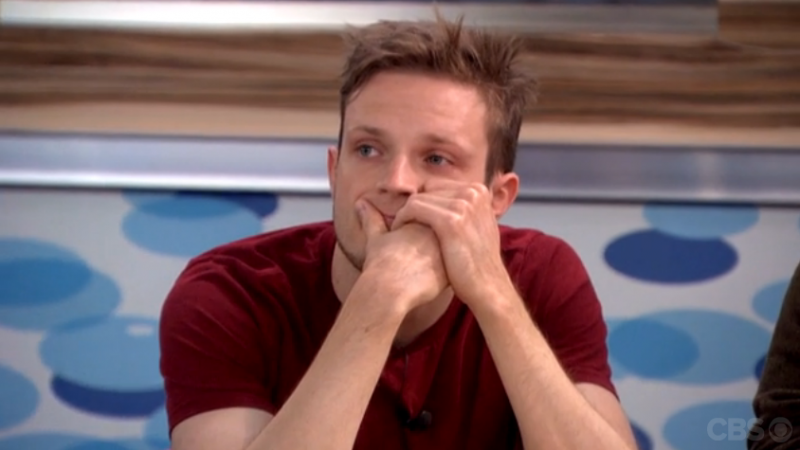 Anyway, John’s fate looks to be getting sealed.  He’s certainly a champ at winning Vetos though, so tonight could spell bad news for Vanessa…or Meg & James, if the fates dictate that things must change.  And by fates, I mean CBS producers, obvs.  Steve is clearly uncomfortable with this turn of events while John seems to be actually surprised at this turn of events as he thought that last week he had cast his lot with the Austwins.  Sorry, buddy. 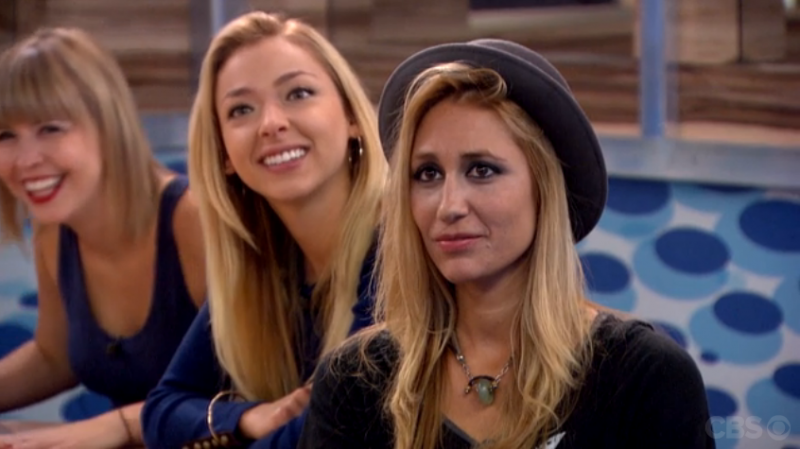 And then Austin gives some crazy-ass speech about life, knowledge, love and power which everyone just kind of observes and watches with curiosity and awe – it’s kind of out there and ridiculous and a result of being locked up for 60+ days.  Vanessa is relieved to be safe and is pretty confident that at this point, she and Austin have each other’s backs.  We’ll see, Vanessa.  We’ll see. 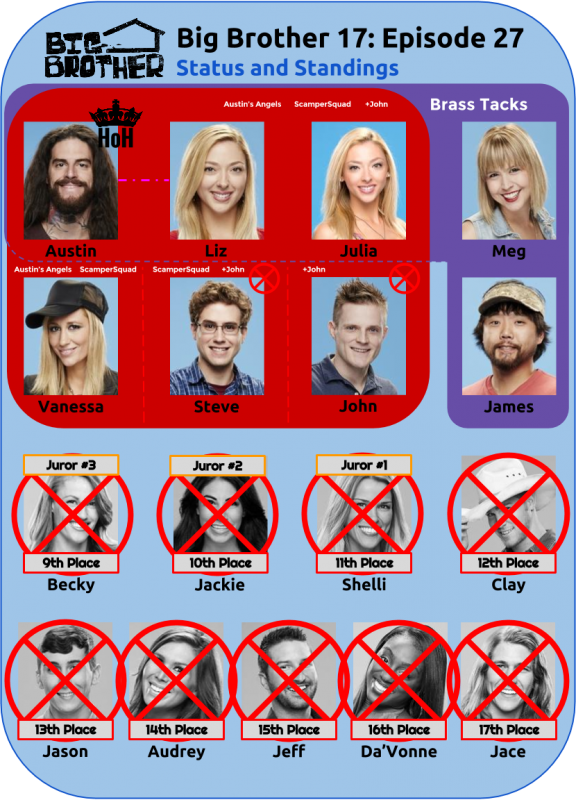 Personally, I hope it is John that gets evicted this week BECAUSE he would then still have a shot at winning his way back in.  When you take Vanessa out, you need to take her out for good and it needs to stick.  Not that she’s shown much in the way of challenge prowess, but when properly motivated, she might surprise you.

Anyway, I suppose we’ll find out what kind of shenanigans arise tonight surrounding the Veto and if Brass Tacks really has much staying power.  I’m not so sure it does, but I am certainly happy that Meg & James had another week of survival!   At least so far!

Next, Vanessa Wins Veto and John Brings Out the Arsenal –>