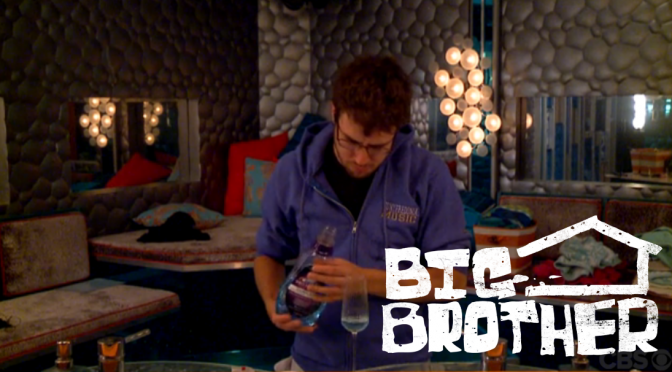 Sure, there’s plenty of other things I could have focused on when thinking of a headline, but I just had to laugh at Steve’s reaction after getting nominated.  We know that he has this weird, unknown antagonism towards Becky, which I’m not sure she’s aware of, but it’s there.  We also have seen that Steve doesn’t win a damn thing.  Further, Steve is just overwhelmingly strange – I’d call him a loner but it does seem he at least has a friend in John.  So yeah, when Steve tells us that he’s gunning for Becky now, it’s like?  Really?  Your strategy is to float through to the end?  How on earth does that qualify as a winning strategy?  Sure, you might make it to the end, but almost everyone else left has proven themselves in one way or another and could easily argue a win.  Floating to the end just doesn’t cut it.  ANYWAY…. 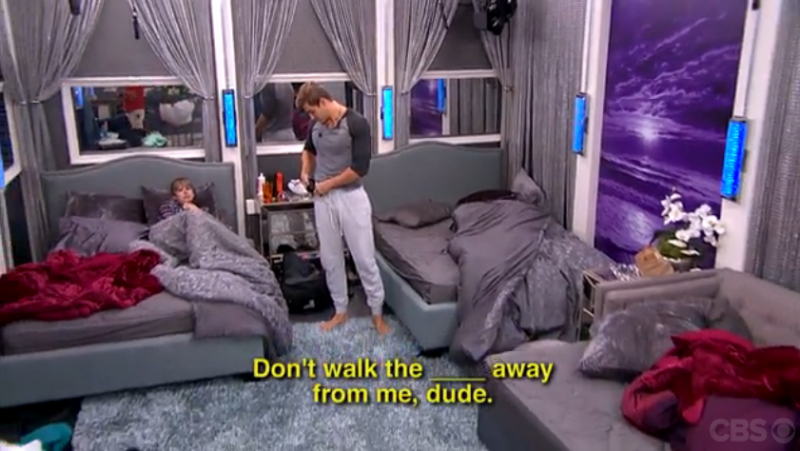 Remember how I posted last time about some random footage that showed up that seemed to have no impact on the game but was still dramatic in nature?  That was the clips of James arguing with Clay…well, we ended up seeing that on the show this episode! 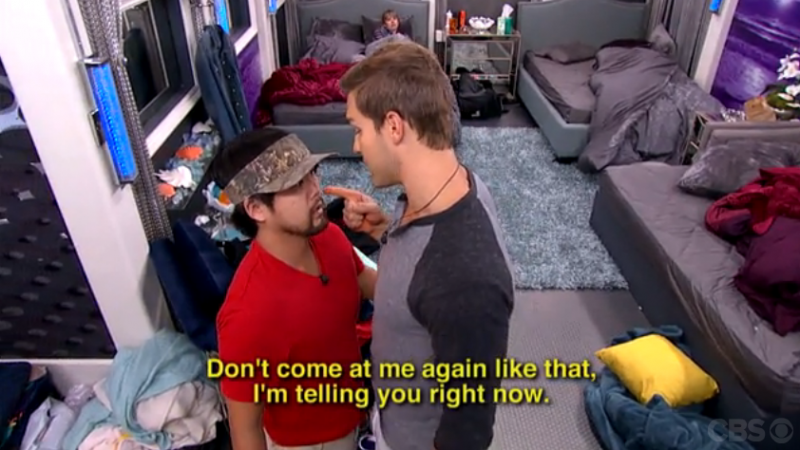 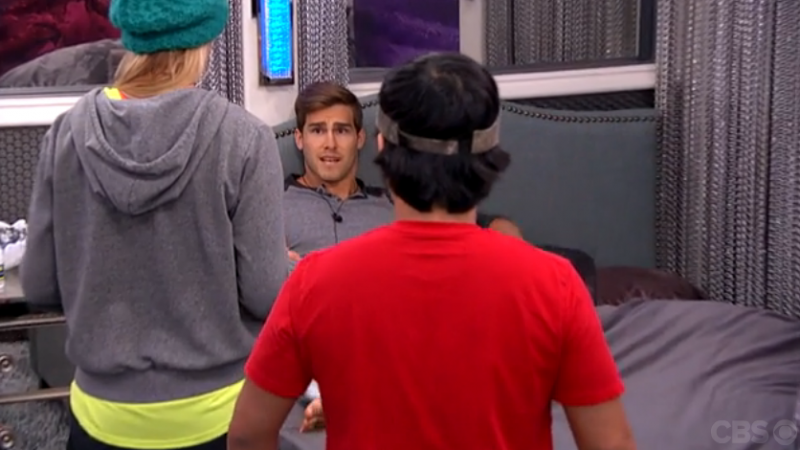 As kind of made obvious, it seemed to stem from something told to John.  Well, in fact, it was John declaring to Clay that he really didn’t want to vote Clay out as John felt it was easier to work with Clay versus Shelli, who always has Vanessa in her ear.  He thinks that Vanessa will eventually target him.  Somehow, Clay turns that into something James was spreading and tells Vanessa that. ÂVanessa confronts James about it and he’s understandably confused, as he’s never said that.  Then we get the fight as James confronts Clay about it since Vanessa tells James it was Clay who told her. 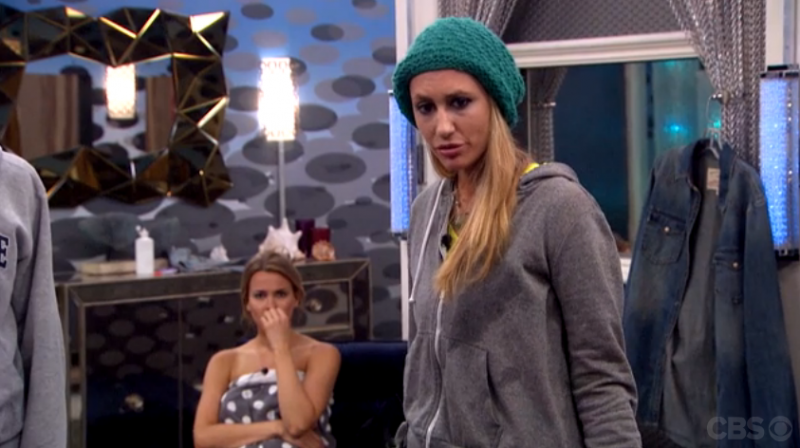 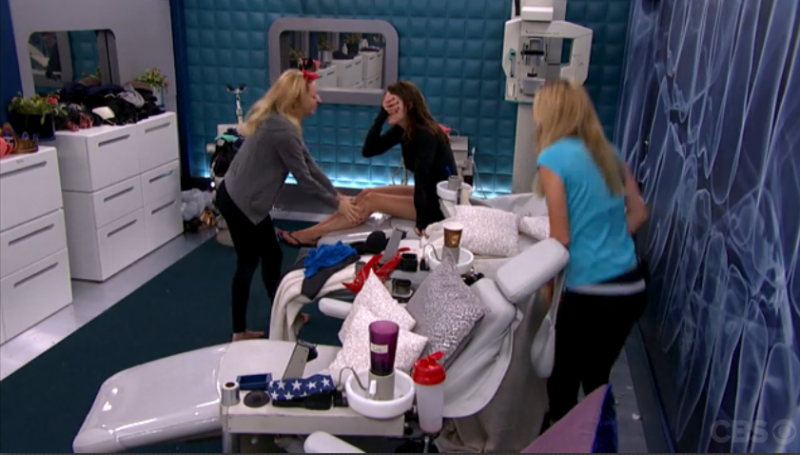 Honestly, this whole thing really only served to make Vanessa look bad.  James stood up for himself and Clay eventually realized he misinterpreted things, plus Clay is now out the door, but EVERYONE remembers Vanessa freaking the fuck out.  There were even tears.  Plus, we even got John indicating he’s tired of Vanessa’s antics.  It was funny that he thought he had just made himself a huge target after all that, but it’s pretty clear that Vanessa is not doing herself any favors by continually melting down.  Vanessa manages to insult John over and over by refusing to believe that he could come up with those thoughts on his own.  Oh, Vanessa, what the fuck happened to you?

We Do Have Ourselves a New HoH 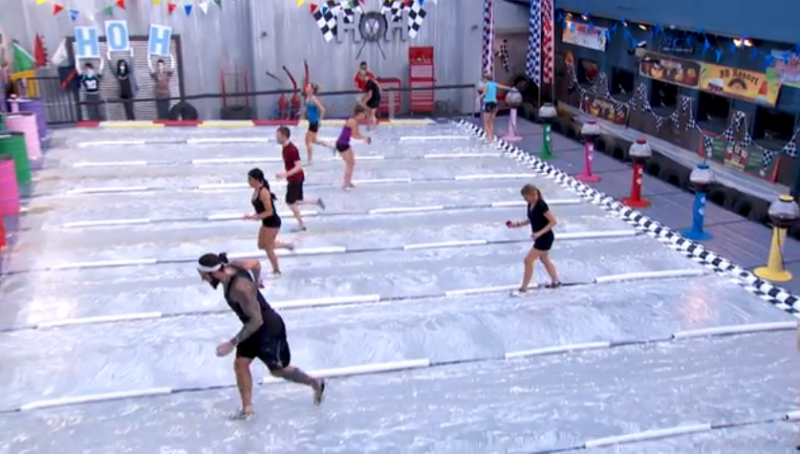 When last we saw this group, it was far too early to determine who was going to win.  After dealing with the flashback though, it became clear that Becky took a commanding lead.  So commanding, in fact, that she was able to do something pretty impressive…. 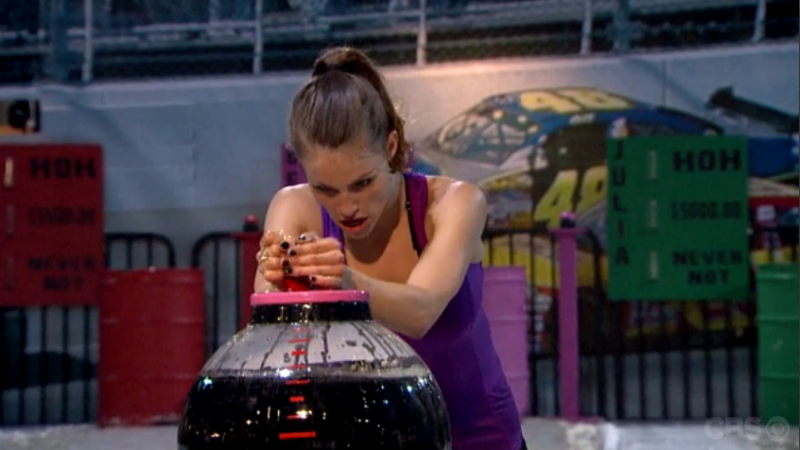 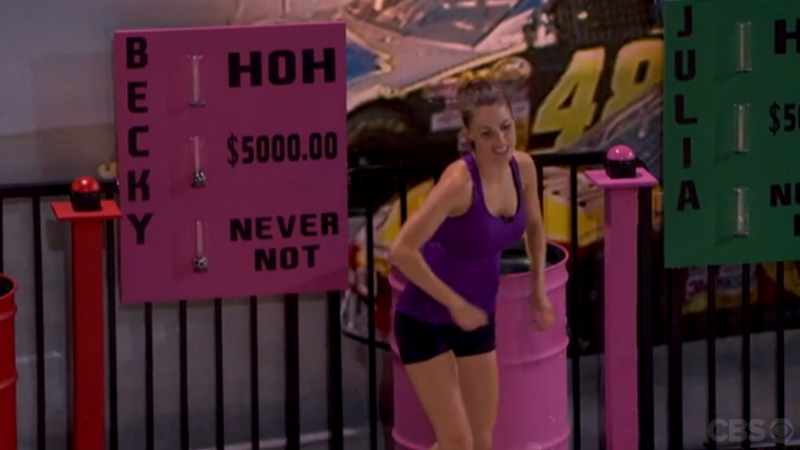 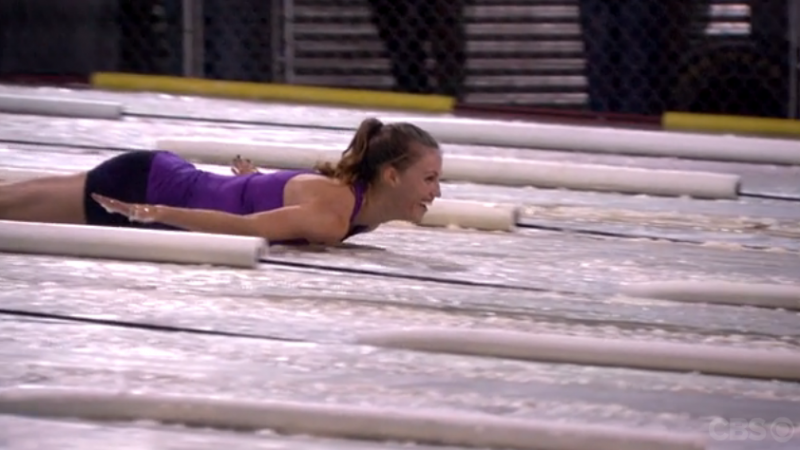 “Trainwreck” Becky not only won, she got herself those extra prizes too.  Well done, Becky, and good on you for openly declaring that you’re in with the Meg/James/Jackie alliance as you were looking like one of the floaters.

I hadn’t realized that Becky was as close as she was with that group, as in my last post, I was pretty certain James was fucked.  I thought Jackie might have a shot, but that’s pretty tough to cling to especially when there’s so many others competing.  It’s great to see a competing alliance! 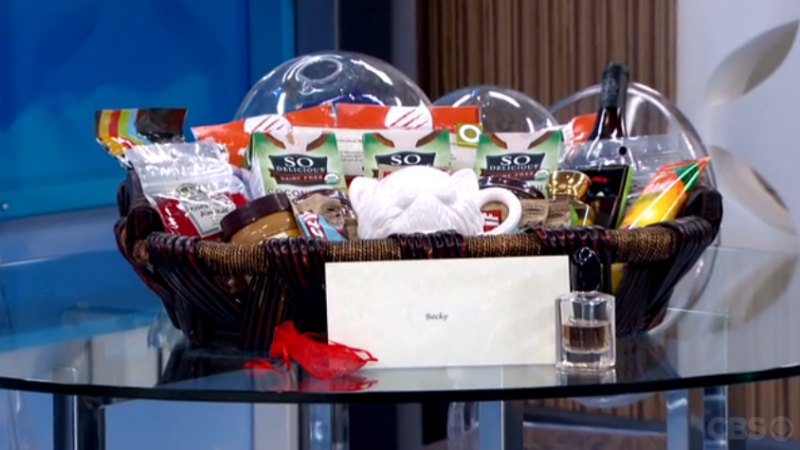 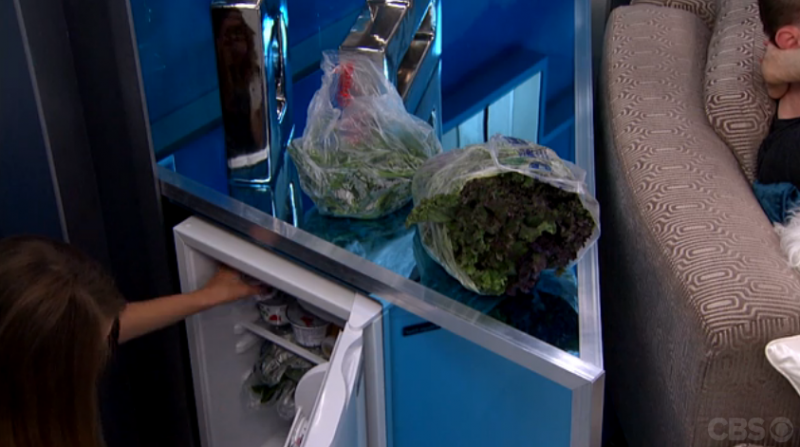 I guess this is one surefire way to ensure that no one steals your special treats.   Ugh!

Nominations aka When Becky Sealed Her Fate 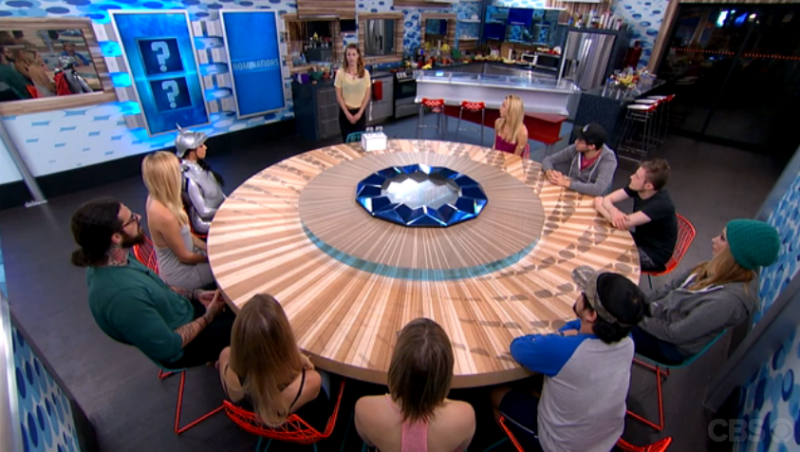 Ha, I kid of course.  I mean, maybe she does seal her fate by jumping in with James, Meg, & Jackie, but to think that because she jokingly told Steve that he was nominated and that it’s time for him to win something and prove himself that NOW Becky is going to suffer Steve’s wrath??? Bwahahahahahahhaa.  So we’ll see. 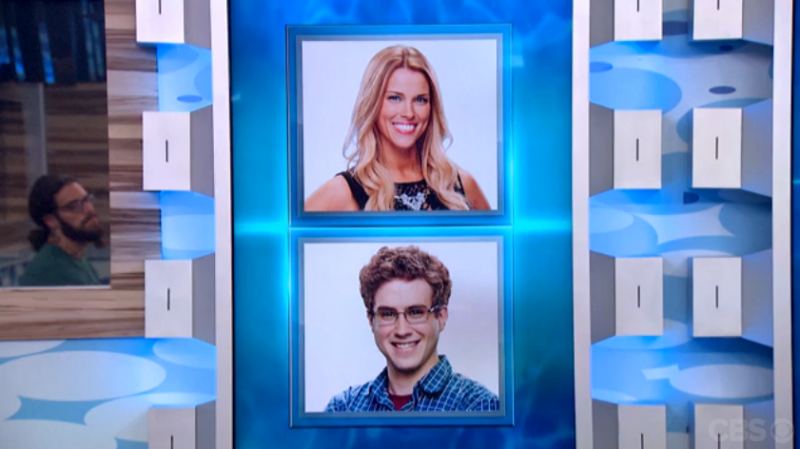 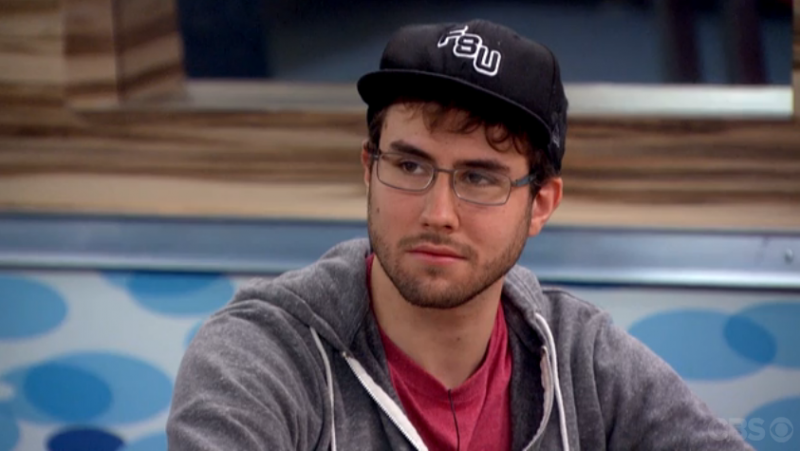 But let’s be real.  Steve is not going to be doing any revenging.  His social game is awful. 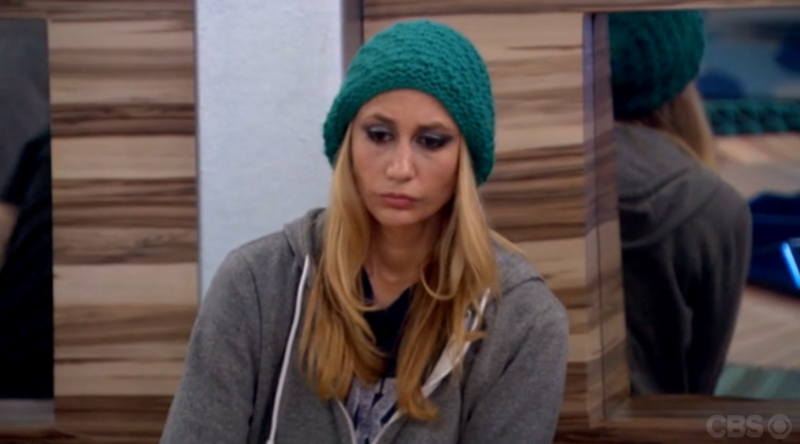 The person who is worried, and should be, is Vanessa.  Becky told her to her face that she wasn’t interested in any deals or alliances from Vanessa, and while that shocked Vanessa, it also clued her in to the fact that perhaps Vanessa is in the other side’s crosshairs.  Becky fully intends to backdoor Vanessa and super-surprisingly tells Shelli all about her plan.  I admit I was dumbfounded when she did that, but I guess tonight we’ll see how that all plays out.  Will Shelli try to help Vanessa out? 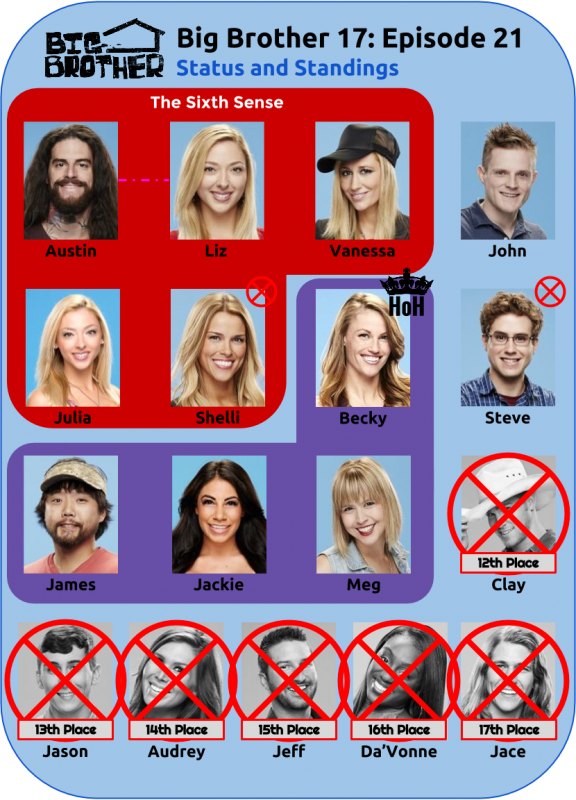 We’ve got some interesting possibilities going forward.  I do think Shelli is safe unless the Veto goes absolutely bonkers.  The scenario where Vanessa wins Veto and then saves Shelli is very interesting, as that makes them both safe.  I guess Becky would have to put up another Sixth Sense member?  Hell, maybe Steve goes home?  I’m definitely entertained by this season though and my hopes for something challenging the Sixth Sense dominance were realized.  The next weeks seem poised to be interesting indeed.

Next, Becky Takes Matters Into Her Own Hands –>