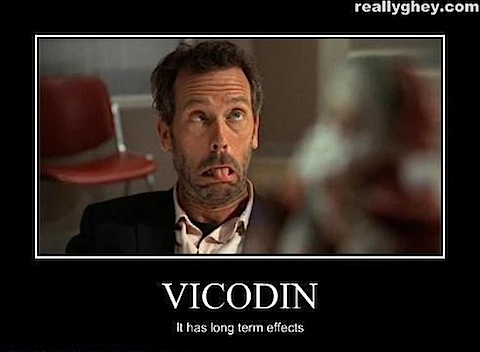 Once I get the pictures off my camera, I’ll do a post about the adventures Larry & I had while in San Francisco this past weekend. Unfortunately, this post is to update on the fact that my sciatic problems are back with a vengeance. Larry & I have probably deduced what it was that did this too. On Monday morning, when we were due to leave SF to return home back to LA, I was taking a shower. As I rested my right leg (the one where my sciatica lived) on the edge of the tub to clean my leg, I bent over to clean my foot and instantly my lower back and leg exploded into white-hot pain. My foot slipped and before I knew it, I was doing my best to lower myself down without falling while at the same time crying out in utter agony.

I could feel the searing edge of pain that the sciatica I had previously cutting through my back, and there was equal parts of pain and anger at possibly having to deal with my sciatic issues, AGAIN, combining to making me scream out. It was pretty awful and also for Larry, as here I am shrieking in agony and unable to stand up due to the nonstop pain. It was about 9am in the morning and we had to check out at noon. So after lots of screaming and such, Larry was able to get me to the bed and I laid on my left side, the only position that seemingly allowed me a chance of reduced pain.

Here’s what was going through my head then:
1) We’re in fucking San Francisco. What the hell do we do? If I somehow managed to break a bone (I didn’t think so, then, but god damn, the pain was agony), and then had to maybe get help there, it was going to be a bitch to figure out logistics.
2) What if I broke something???? I didn’t actually fall or thump down as I managed to catch myself after the slip. But this was utterly unbelievable pain.
3) What the hell happened?

The logistical issues aside in #1 and the pain issues of #2 also put aside, I couldn’t believe that a slip of my foot would cause this. I figured maybe the slip led to me overcorrecting while trying to catch myself, and I possibly overextended, hence causing the renewed sciatica. But as the day progressed, other possibilities came up.

Anyway, while I tried to not move on the bed, Larry got us food and then went to Ghirardelli Square to get our souveneirs that we promised others. I just laid on the bed, finally getting dressed and trying to prep myself, as I figured if I could find a comfortable position, I could make it through the upcoming 6 hour drive back home. So that’s what we did – got in the car, I reclined in the seat to a low position, bunched up jackets to give my back some support, and Larry heroically drove us home. At the few stops we did take to go to the bathroom and get gas, I’d get out of the car and after a few steps I’d be in complete agony. This worried me, as my first sciatic attack didn’t prevent me from standing. But now, both walking and standing were pain magnets.

During those 6 hours of driving back, Larry and I speculated about what might have been contributers to this. I think the following theory is the ultimate right, foolish explanation: We did a bicycle ride across the Golden Gate bridge the day before (on Sunday). Riding a bike itself was not a problem as the exercise and pressure there is on your legs. At the end of the bike adventure, you go to Sausalito and board a ferry with your bike back to SF. You park the bike in the lowest level of the boat upon boarding in Sausalito. But in SF, you have to depart off the next level up and you have to bring your bike up a flight of stairs. I didn’t see that there was a small ramp along the stairwell you could wheel your bike up as long as you were to the left of your bike. I was on the right and thus lifted my bike up to get up the stairs. Not smart at all for anyone to do as that’s a lot of pressure on your back. To be honest, I didn’t feel any problems then. But that seems to be the only moment I had with stupid lifting that involved my back. I bet it was an inevitability that my back was primed to spazz out within the next few days due to that severe strain. I just happened to enter the danger zone while in the shower the next day.

So we got home and I had managed to find a spot and position to sit in that entire drive during which I was not that bad off. When at home, going up the stairs was awful, but I persevered. But it was after trying to find a comfortable position on the couch and getting trapped on the floor (and I could only get up if Larry literally pulled me up off the floor – “I’ve fallen and I can’t get up” WAS MY LIFE) when I could tell that I may need more immediate help. I had actually set up a doctor’s appt for Tuesday (today) but I started to realize that I needed help now. Went to lay on the bed to try to feel better and it was pure agony. I started to really believe i had broken something and then I felt feverish, and my paranoia/pain threshold was out of control. I looked at Larry and asked if he could find which hospital I could go to with our insurance. We then headed to the Santa Monica UCLA Medical Center shortly thereafter.

On a late Monday night, the hospital was luckily not that crowded. My pain started really spiking at that point. It felt like an eternity while waiting in the exam room as I think a combination of pain and fear was overwhelming me. The doc checked me out (as I did him – not a bad looking doctor) and as Larry observed later, it was clear the doc knew the exact questions to ask and had a good idea already that I had thrown out my back. I’m guessing the fact that I could lift my legs while laying on my back was a sign nothing was broken, but I’m telling you, doing that HURT. The awesome nurse Katie gave me a shot of morphine (that was a new experience) and I was off to the x-ray booth. This quick turnaround for x-rays was also a reason I’m glad to have done this the ER way as otherwise, I would have been referred to the x-ray center by my doctor, wait on a first-come, first-serve basis, and basically suffered in agony the entire time. After the x-rays, I got wheeled back to the room to wait for the diagnosis. Doc Hot let me know there weren’t any broken bones, which was a relief on one hand, as who wants a broken ass or hip, but if it wasn’t broken, why the fuck did it hurt so goddamn much? He suggested a second dose of morphine, which was the amount I needed to finally feel a lot less pain.

Nurse Katie came back and said that it was a textbook-case of throwing out your back. Sucks to be me, in other words. But she prescribed me some vicodin and flexeril, as well as bed rest for a few days. So here I am now, feeling much better and heavily dosed. I anxiously hope that I don’t end up having to yet again deal with the sciatica until it goes away. I’m going to see the doc on Thursday to see what he thinks. I may have to get another MRI. Perhaps it will yield a stronger decision as to whether or not I’ll need surgery. I’d like to not do that, but I may have to. Alternately, if it can subside on its own again, I just need to get to a physical therapist asap to work on building up my core. I had planned to get to one shortly but never got to it. D’oh.

So yeah, sciatica is a bitch. For those who have good backs, cherish it.

3 thoughts on “Riding the Vicodin Highway”