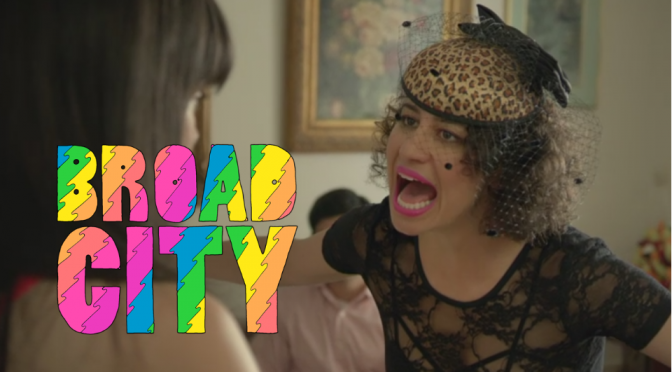 After getting turned on toÂ Broad City last year by Nicki, Larry & I were definitely hard-core fans. Â Hell, we even went to Broad City Live a few months ago! Â The worrying thing about an amazing first season of a television show is that you never know if that was a beautiful fluke or if the show can maintain and even improve in its second. Â Well, forÂ Broad City, it seems there’s no sophomore slump! Â Holy shit. Â This show is so fucking good. Â The first episode was an awesome return to a wonderful show but then the second episode was funny but for me, it wasn’t aMAZing. Â But then last week’s episode, “Wisdom Teeth,” and then last night’s episode, “Knockoffs,” came into our lives, and holy shit, they are possibly my favorite episodes of this show up to this point.

Abbi’s drug-fueled post-wisdom teeth adventures are absolutely epic in “Wisdom Teeth” but the whole episode is just so damn funny. Â Here’s a clip from her Whole Foods escapade….”They WANT to be knocked over, Abbi!”

Get More: Comedy Central,Funny Videos,Funny TV ShowsThen last night, after Larry & I had re-watched “Wisdom Teeth” for a third time (the second time was up in Big Bear where of course it was a huge hit), on to our screen stormed “Knockoffs.” Â Abbi finally gets her chance with Jeremy and of course Broad City life means it’s not so easy. Â Awesomely, you get to see things you’d never expect to on TV while laughing till you cry. Â We also get to meet Ilana’s mom, played by the amazing Susie Essman from Curb Your Enthusiasm fame, and they have some amazing interactions. I’ve included this scene from the episode where Abbi meets up with Ilana at a shiva for Ilana’s grandmother. Â It’s fucking amazing:
Get More: Comedy Central,Funny Videos,Funny TV ShowsSo yeah,Â Broad City is fucking back and it’s unbelievably even better than it was in the first season. Â This is the golden age of comedic television, truly.