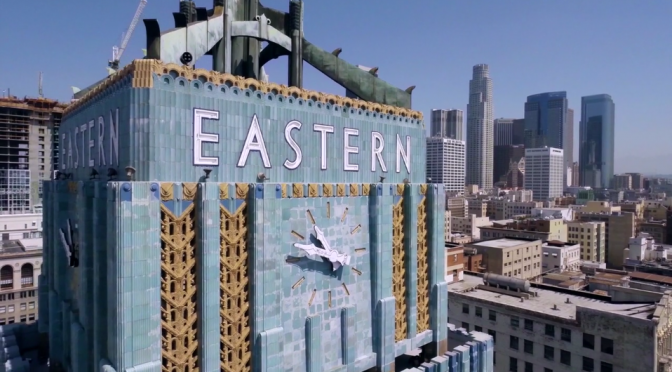 CurbedLA shared a video created by someone who attached a GoPro camera to a personal R/C drone (I so want to play with that kind of a setup myself now) and flew it around Downtown LA capturing views of the Historic Core area.  It’s stunning:

Larry & I have looked a few times at places within some of these buildings to live in and sometimes we’ve come VERY VERY close to taking the plunge, but just didn’t.  I think we’d enjoy it, truly, but there seems to be a little bit of a ways to go before it’s as truly livable as some place like NYC.  But Downtown LA has a lot of character in its older parts of the downtown area and while it’s nowhere near as dense as Manhattan, there’s still something compelling about it.

Speaking of LA, we watched a documentary on Netflix the other night called Los Angeles Plays Itself.  I had read about it in Entertainment Weekly, I think, and when we saw it available, I was like, oooh oooh, let’s watch it.  I then saw it was almost 3 hours long and it was about 8pm at the time, so I initially balked but then we agreed we’d turn it off and watch the rest later if necessary.  We didn’t turn it off.  It was fascinating.  Basically the narrator has collected clips from movies all across the cinemascape filmed in Los Angeles (he hates the term “LA”) and constructed a narrative about the many various ways the city is perceived.  I won’t try to summarize it here as it’s 3 hours for a reason.  But you can tell he has a deep love/hate relationship with what Los Angeles is, was, and is turning into.  It’s fascinating.  Pretty much all the movies I expected to see were there, with the exceptions of some bigger movies that he probably didn’t get permission to use or didn’t really make use of LA in any meaningful way.

There’s a bit of backstory I believe in the creation of this movie –  it was a pet project of the filmmaker and remained in personal collections for the last decade, as there are no movies past 2003.  It was finally released commercially last year and hence why we were able to finally see it.

It probably helps to both love Los Angeles and the world of film if you’re going to watch Los Angeles Plays Itself, as it’s one of those where you’re probably bored senseless if neither of those topics interest you.  The 3 hours fly by and I kind of wish a sequel or an addendum was done including some recent movies, especially ones like Collateral.