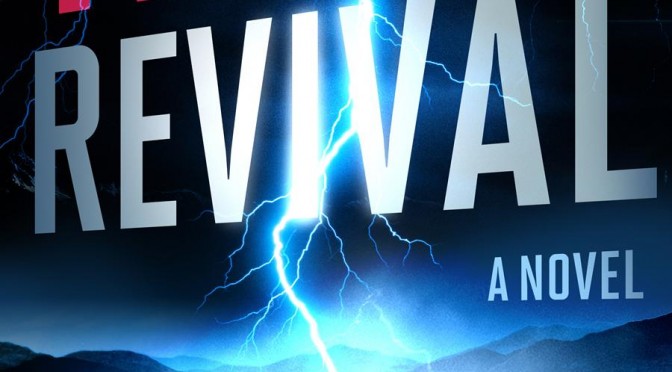 I had briefly mentioned my thoughts on Stephen King’s Mr. Mercedes and found it inoffensive and enjoyable enough, but it didn’t really feel very StephenKing-y.  Since I had taken my time to actually get to reading Mr. Mercedes, it was great timing that his second novel of 2014, Revival, ended up landing on my doorstep right when I finished Mr. M.  Revival stayed unopened on my nightstand for a week or so though but once I cracked it open, I was immediately enchanted.  Oh how silly I was in those early days.

Stephen King is amazingly talented at writing characters.  Even Mr. Mercedes had compelling characters but the plot was just where I felt let down as it was a simple (yet disturbing) crime story.  In Revival, Stephen King yet again creates a set of characters you immediately bond with.  There’s Jamie, who we meet as a young boy and learn all about over the course of his life;  there’s also “Pastor Danny”/Charles Jacobs, who bounces into Jamie’s entire life at both opportune and inopportune moments.  While Jamie is our eyes & ears into the story and certainly our protagonist, Pastor Danny isn’t exactly the antagonist.  At the beginning, when he’s the town’s charming preacher with the boyish good looks and the beautiful family, you’re utterly within his sway.  Then tragedy strikes and Pastor Danny mocks God and heads out of town.

King has created these characters and you LIKE them.  Even Pastor Danny!  He’s a guy who got completely screwed by cruel fate and you can relate.  What you don’t really know is that Pastor Danny has plans.  He is quite a student of lightning and its “healing effects,” but as we learn over the course of the next five decades, there’s a price to pay for playing with these kinds of forces.

If you’ve read any reviews of Revival, you’ll likely have read the sentiment that there’s really no payoff until the very end.  That assessment is mostly true, but it seems to be missing the forest for the trees.  The tale told of these two men and the way they intersect over their lifetimes is fascinating.  Stephen King never lets you get bored with these two men and you want to know what they’re doing while it’s happening in the 60s, 70s, 80s, 90s and 00s, while knowing that this is a tale being told from “The End’s” vantage point.  King builds a fantastic sense of dread and every strange moment he reveals lets you know that something indeed is happening and it is a bad thing for all involved.

And JESUS – the end….what the book leads to…when I finally realized that was it and what all had happened, I turned to Larry and just muttered “that was fucking bleak.”  Obviously King loves to have his carnage and his horror and all associated mindfucks that go with it, but in Revival, it is beyond that.  Even he has mentioned in interviews that “Revival is a dark, nasty piece of work” and that is no lie.  Someone on GoodReads.com mentioned in their review that the reason they found this book so bleak was that King puts out a sense of a hope and at the end, utterly smashes that hope and fucking leaves you stranded and alone.

It’s a rough end to a story but I can’t really go into it without spoiling it to say why.  But the journey to the end was still worth taking.  A lot of good lines in the book, but one that stuck with me and one I see quoted a lot by others is this:

Home is where they want you to stay longer.

There’s some great stuff in this book, including the ending, and it’s a great Stephen King novel through and through.  Just, damn, man, damn.