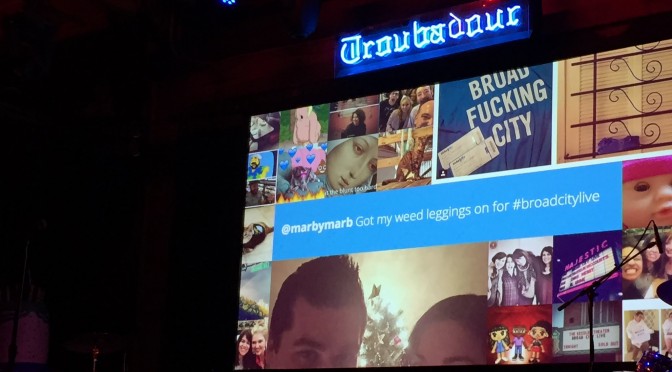 And it was great!  After having been bowled over by the first season of Broad City, a lot of that due to Nicki encouraging Larry & I to watch it, Nicki set up an outing to go see the Broad City Live show.  Hilariously, we ended up getting these tickets back in March or something of this year – so yeah, 9 months ago we got these tickets. And we all made it through to see it!  Certainly a LOT of shit has occurred in the meantime, but comedy exists to be able to shine a light on that crap and get a good laugh out of it, right?!

So our 9-month wait finally ended and we had a nice late Saturday night event in West Hollywood and a very nice night.  First had dinner at Trattoria Amici a block away from the Troubadour theater, and it was great food.  Also got us a little bit relaxed for the show as we certainly had some drinks.  Yay wine!  Then afterwards, (and oh yeah, a big thanks to Maj for picking me & Larry up – so environmental) it was time to get in line at the Troubadour for the 10pm show.  Had to wait a bit and we thought we might have to stand up all night as the Troubadour is billed an SRO venue, but they had set up some rows of folding chairs and we were early enough in the line to grab 7 seats together.

ANYWAY – seeing Abbi and Ilana in person was awesome.  They’re a very funny comedy duo.  We had no idea what to expect from this show though, as it wasn’t a stand-up comedian set nor was it an Improv show.  Instead, it kind of was like a performance piece or something along the lines of Kathy Griffin, where it’s just a bunch of conversational stories, most of which are hilarious.  I think that Abbi is my favorite within the Broad City TV show as she’s by far the less zany one, but in a live performance, Ilana KILLED IT.  She’s so good up on stage and it just feels like she knows exactly what the crowd wants while also still being somewhat surprising.  A great show, lots of laughs, and worth the $16 ticket price!  HA.  Can’t wait for Season 2 to start in January!

PICTURE TIME – and a side story here:  When we got into the Troubadour, there was a big screen up front showing pictures taken from outside their shows on social media, using #BroadCityLive as a hashtag.  You were invited to join in, so I ended up getting two of my pictures up on the rotating board.  So yeah, it was kind of awesome.  All my pictures follow below these Twitter inserts!

Bitch, you're 22! Ready for Abbi and Ilana in WeHo #BroadCityLive pic.twitter.com/gwifkKk7ew