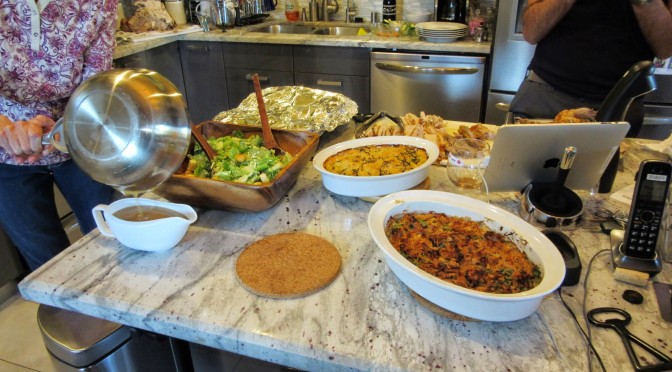 It’s been a good few days thus far, although I think perhaps we are drinking a tad too much to celebrate the times?  Ah, maybe not.  It’s all in service of having a great time, and that is something we are definitely still having.

So Michancy came out for the holiday, arriving on Tuesday.  We took her to Edendale for dinner as any good friend should do.  Then on Wednesday, after I got home from work, we went to Americana for the best dumplings in the city at Dim Tai Fung, and it was glorious.  Larry then produced a quite amazing Thanksgiving spread, cooking up some stupendous food for us and it was utter perfection.  Mom and Stacie came over for the goodness, including the food and the music.  70s pop / rock can’t be beat!

And if you didn’t know, the teaser trailer for the next Star Wars movie, The Force Awakens, was released, and holy moly, it’s awesome.  Nothing is given away and it’s hard to tell what is happening, but the moment you see the Millennium Falcon accompanied by the Star Wars fanfare, it’s time for the tears.  Can’t wait for December 2015!