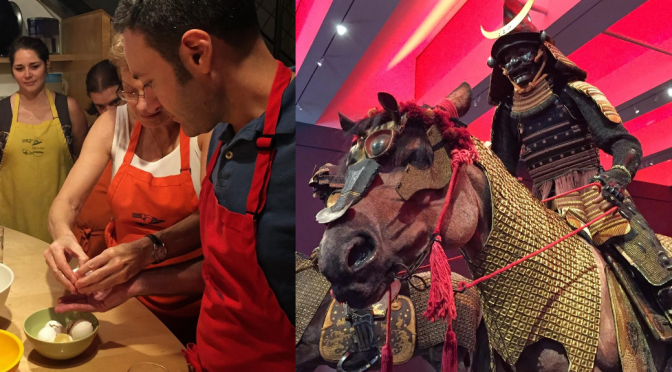 So Larry & I had some fun these past two days – here’s how!

Last night, we went to a Hipcooks event that Larry had received from Nicki as a birthday gift.  It’s one of those things where a group of people all cook a meal together and then feast upon the results!  We chose “J’aime Paris”, which was all about cooking a Parisian meal with a modern/American twist.  The main meal would be coque au vin, a fun salad, and finished off with some awesome chocolate custard (fancier word for it, for sure).  We weren’t sure what to expect although Nicki had raved about it plenty as she’d volunteered there as an assistant and so had experienced this plenty.  She hadn’t led us astray and it indeed was a blast.  Everyone there was a lot of fun to be around and our instructor was great, and most importantly, the food turned out spectacularly.  So good!  Here are some pics – it was so colorful inside that the pics really are a lot of fun:

In the Arts complex where the HipCooks loft was

The main stage where the real fun takes place

Where the eating happens – shopping too

Working on the tarragon

The beginnings of our coq au vin

it was so delicious

How to get the yolk

Soon to be ridiculously good

These turned out spectacularly

Then today, we headed over to LACMA as we hadn’t been there for a few months.  Quite a few new exhibitions to see, along with one or two repeats:

We were done after that, but first grabbed some coffee at the Coffee & Milk coffee bar.  Had a much necessary latte before heading home!

The striking Samurai exhibit at LACMA

Looking towards the Stark Bar