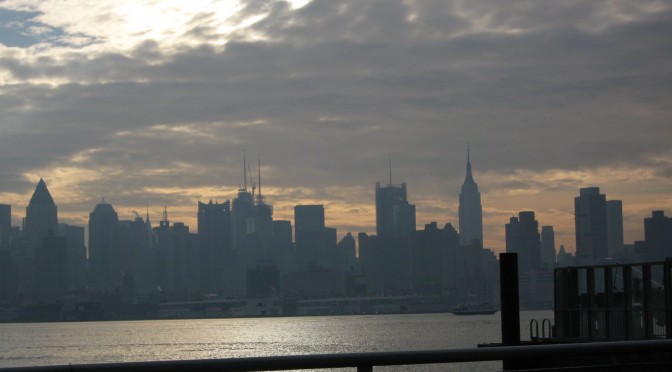 I’ve resumed my exploration of NYC again, now that the hordes of rampaging tourists have gone back to their barbarian settlements. 😉

Not a moment too soon, I tell you. It was close there. Like I mentioned in my last post, the throngs of people there on that Friday before New Years was ridiculous. Re-DONK-ulous, if you will. Now where was I with respect to everything? Well, New Years was a lonely affair but not totally depressing because I did ring in the New Year with my CS friends via the phone at least, both on my New Years and during theirs. That was actually a lot of fun. Next New Years will be different, I tell you. You heard it here first – and you can quote me on that.

Those 4 days off (again) were pretty chill though, but it was still nonetheless difficult to muster up the motivation to go back to work, even if I do love my job! I was a little tentative about returning because one of my tasks in the weeks leading up to New Years had been to get an Oracle Report developed that would satisfy the all-powerful Affiliate Relations department head. So task #1 was to learn Oracle Reports…. I spent the last 2 weeks up to New Years getting that taken care of. Task #2 was actually developing the report, which I fortunately did in those last 2 days I was at work before the New Years break. I was actually quite relentless in getting a working one done with a SQL query (heh heh, I wrote query) that actually returned desired results. Then I brought my laptop home to work on it further during these 4 days off….and yeah, that totally didn’t happen. So on the Wednesday after New Years, the first thing in my Inbox (heh heh, I said Inbox) was an email from my boss which was actually a forward from the Affiliate Relations head saying, “WHERE’S MY REPORT????!!! (fire and brimstone voice there)” I showed my boss what I had and he said, ‘Great, good luck when you show it to them!’ ….uh, what? That’s when I realized I was on my own for this one, and that lonely ride to the 46th floor was all mine. So my happy ass went up to hostile territory (as basically they hate us….long story short) to take my punishment. But an hour and a half later, I left them all with a smile. HELLS YEAH, bitches. The AR head actually smiled (which is unheard of) and she emailed my boss saying the report was great and thank you…which is also unheard of. Talk about a great way to start off 2008!

And then to make things even better, after Wednesday, the barbarian hordes dispersed! Yes, I could actually leave 30 Rock and walk out on the plaza where the tree still is and there weren’t bajillions of people all jostling to take pictures of the effing tree and me having to try not to walk through the shot and eventually not caring if I did. I’m sure there’s someone in North Dakota who has pics of my scowling face and Rockefeller tree. Noticing this drawdown of people re-sparked my desire to see the city again on my own time, so I decided it was time to go check out the Empire State Building again. Again because I had been up it before….when I was 12 with my Dad.

So on Saturday, which was quite a lazy day, I made all the plans and also did some research and purchase of templates for a major overhaul to the illustrious hobiebarnes.com (stay tuned for that! it’s going to take me a bit of work to get this one going but it should be cool if I can actually get it done). Then this morning, I got up relatively early for a Sunday (8am!), got a Starbucks jolt, ferry’d over to Midtown, stopped by 30 Rock to do about a half-hour’s worth of work for those above-mentioned Reports, then walked down 5th to the Empire State Building (picking up some new shades at Fossil as I desparately needed some black aviator style glasses, let me tell you). Mom and Harv said they want to see this when they come out this spring so I figured this was a great way to scout out the area too. I was prepared for ridiculous lines as that’s what all the guidebooks say, but with the weather being a bit dreary and it being a Sunday morning, there were basically no lines. It was awesome. I went to both the 86th floor Observatory (the main one everyone goes to) and the 102nd floor Observatory (which is up in the very top of the spire right before the actual broadcast antenna begins – it’s a teeny tiny chamber up there) – man, what a view! I do have to concede that the Top of the Rock Observatory on 30 Rock has the better view though. You can see the ESB from that as well as a much better view of the Central Park area. So if you’re in town and you only have time for one of the two MegaViews, I heartily recommend the Top of the Rock! Then you can also see where I work! After the awesomeness of the ESB, I then walked seemingly all over Midtown, heading back up 6th Ave to 49th, stopping at GAP for some clothes and then bypassing the ferry bus back to the terminal because the weather and peopletraffic was actually quite nice. Plus I had been a lazy ass the day before so I figured I’d get some low-impact aerobic exercise in. Boy did I. When I finally got home, I promptly passed out for a much-needed nap. And that brings you to now!