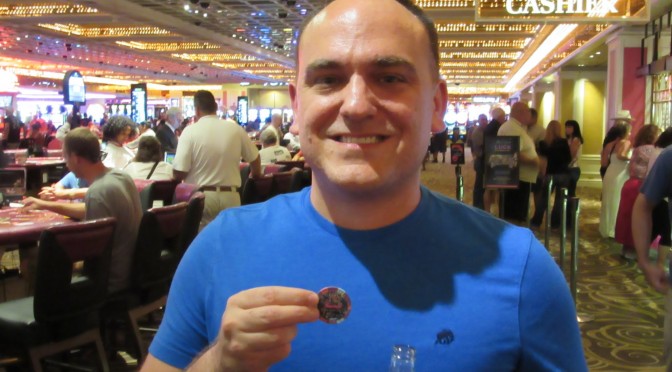 It’s always fun to see the High Roller from a distance.  It’s just so huge!

The neat mural in the ticket area for the High Roller

Not a busy day when it’s 1000s of degrees outside

We got a free drink here too

My attempt at stock photography, apparently

Nearing the apex of the observation wheel’s course

The Hard Rock Hotel w/ UNLV behind it

You can see the shadow below too

I have a similar shot at night

The massive support pylons keeping the High Roller up

Dinner at Carlos and Charlie’s in Flamingo

The walk to the Flamingo Monorail station

The pool was still going strong

In the Flamingo’s Monorail station

At the David Copperfield show

Played some random numbers and patterns this Keno hand

The board that made me a believer

A beautiful Thunderbird on display in Flamingo

Here’s my results after playing craps at Margaritaville! $500 big ones!

Strolling Around Vegas Strip, including Caesar’s Palace, Bellagio, and Cosmopolitan

A snack break at Caesar’s

Outside Bellagio looking towards Paris LV

A great backdrop to watch the Bellagio water show with

Seeing the High Roller from a distance

Paris LV in all its splendor

Inside the Cosmopolitan at the Chandelier Bar

So over the top and dramatic

The Beetlejuic slot machine – did NOT pay out for us

The sights on the walk back