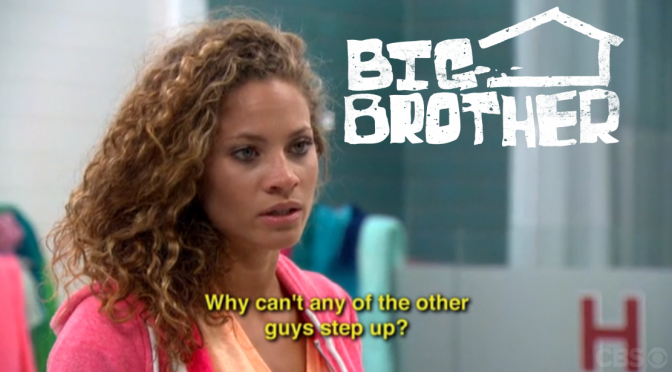 With Devin now out of the house and there really isn’t a Public Enemy #1 person around, Big Brother 16 feels like it has to restart or reestablish a narrative.  It looks like there are two storylines about to be thrown out there this week:

Time to dive into this a bit more and see if we can figure out where CBS is going next with this show….

Egg-moving doesn’t lend itself to too much excitement, yet it was still entertaining.  Slightly.  Brittany and Jacosta had a surprising lead at the beginning, but in the end it came down to Amber & Zach vs Frankie & Cody.  The boys won.  Frankly, Cody needed this win and had to hope that Caleb didn’t win in case Cody lost, as he is certainly a target of Caleb’s Amber-based jealousy.  So, congrats to Frankie & Cody.

Team America makes its next move 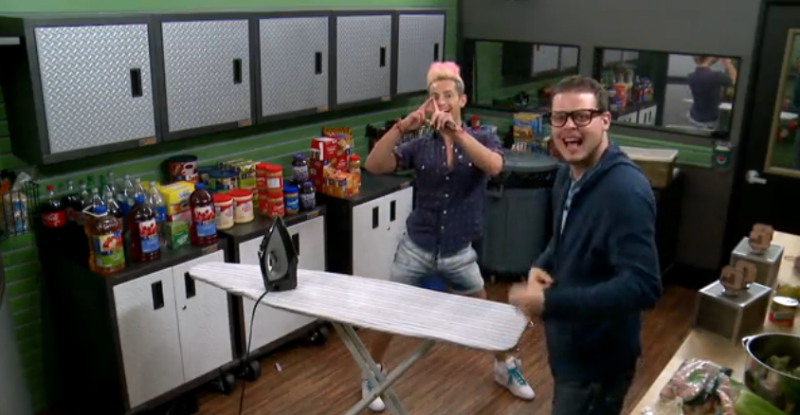 They were tasked with putting up a physical threat;  obviously Frankie and Derrick are closely allied with the male physical threats, so they yet again focus on who the female threat is.  They choose Amber.  Honestly, they could have argued Brittany for this, as she’s shown to be fairly capable.  I think they really should have looked past Amber, as this constant targeting of the girls has to backfire on them, right?  Right?  Regardless, Amber gets her nomination and Team America wins yet another $5k.

Nominations, or How Everyone Can’t Stand Victoria 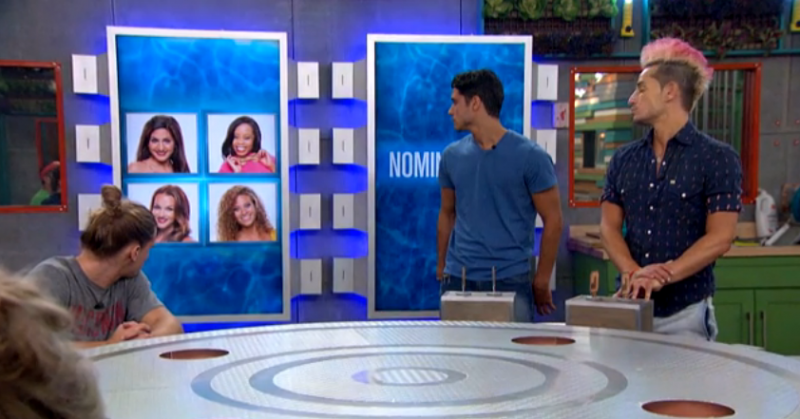 Cody and Frankie weren’t subtle with their targeting this week.  Are you a girl?  Yes?  You’re a target, here’s your sign.  You might think that would be ENOUGH for these girls and that would be IT.  You’d be only slightly right.  Because after this, the only thing that seemed to be the common denominator, for Brittany certainly, was how offensive it was to be compared to Victoria.  Truth be told, Brittany had a point – Victoria has been absolutely a non-element in this season. Again, CBS casting has to be quite pissed at how little of an impact this brassy woman seemed she’d have before going into the house.   So here is Brittany’s Empathy face for Victoria shortly after their nominations: 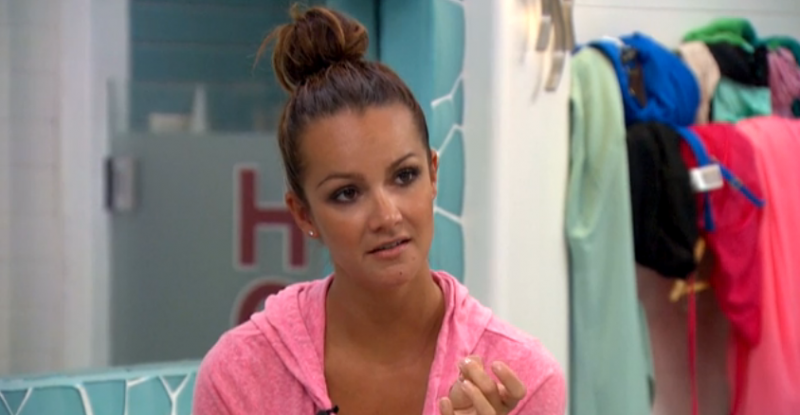 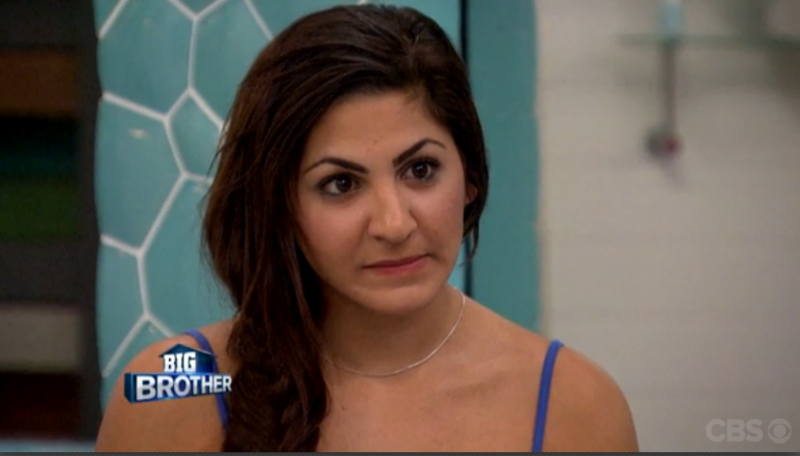 You know, the show pointed out decently enough that Victoria isn’t a bad person, and that she is pretty hurt about how people are feeling about her.  When Nicole let it be known to Victoria that no one wanted to share a bed with her, Brittany got annoyed for being thrown under the bus while Victoria just felt bad.  I couldn’t help feel sympathy too, as these are real people in there.  BUT, you signed up for Big Brother, did you  not? So start playing and stop crying. 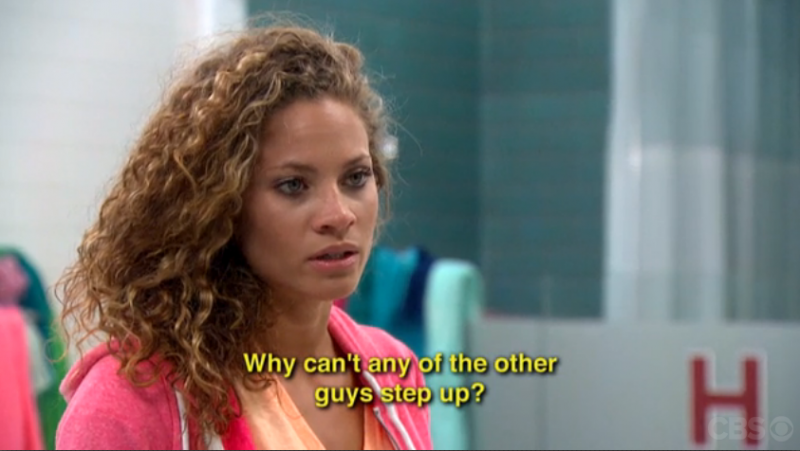 Amber’s eyes were finally opened this episode, when it was made abundantly clear that she’s disposable to the former Bomb Squad alliance.  I admit that I like when houseguests finally get an urgency to play the game and make some countermoves….BUT!  Amber had the opportunity many weeks ago but effectively laughed in Joey’s face when Amber thought she was living large with the boys.  True, Joey made a tactical mistake in how to make the move against the “boys club” but it wasn’t a strategic mistake.  I worry that Amber waited too long to do something about it, but it’s certainly not hopeless.

Christine May Hold the Key 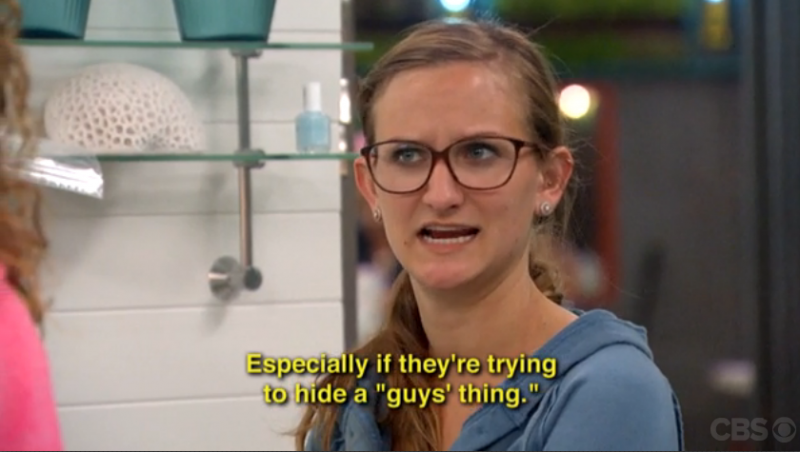 I definitely liked that Amber is reaching out to who it seems has her finger in almost every alliance, Christine.  Now, I haven’t gotten to the formation of The Detonators yet, but Christine is “in” that alliance while Amber is not.  Who knows if The Detonators will actually be a thing, but I think Christine’s alliance is firmly with Weirdos Unite, for the time being.  Plus, I think that Christine looks at the current status of Weirdos Unite and sees it’s a 3-way alliance where 2/3 of it (Hayden and Nicole) are definitely becoming a pair. It’s in Christine’s interest to even those scales by having her own pair (sts): enter Amber.  I’d be surprised if by the next episode, Amber isn’t in Weirdos Unite.  It would make sense to me, strategically.  So come on, Christine, make this season interesting and be the ultimate puppet master.  The guys wouldn’t see it coming.

Oh yeah, now there is The Detonators 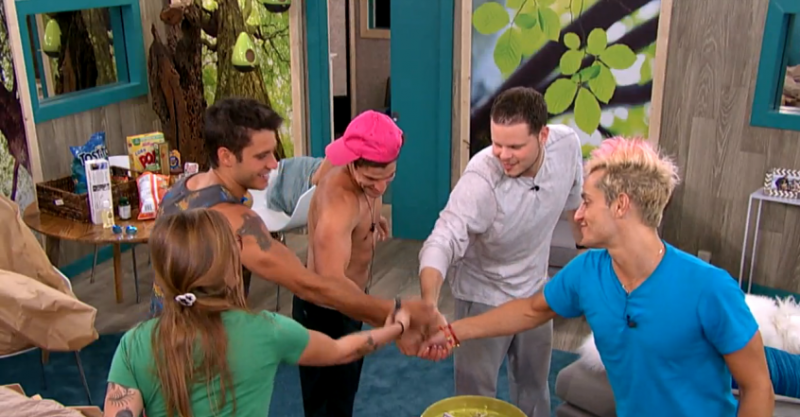 Okay, I’ll believe this alliance is a real deal after a week in which it doesn’t implode.  You’ve got the Zach Attack involved, which I think will always be a weak link to anybody’s alliance.  He just doesn’t know when to shut up and comes up with horrible alliance names:  Jiggly Jokers?   Jagerbombs?  Luckily Derrick saves them with a pretty applicable name for this new alliance.  But my point stands:  despite Frankie’s confidence and Cody’s enthusiasm, I noticed Derrick and Christine were “in” but not leading the charge.  Hence why I think Derrick will ride this as long as it can go and Christine will always side with Weirdos Unite. I’ll be watching!

Battle of the Block, Week 4 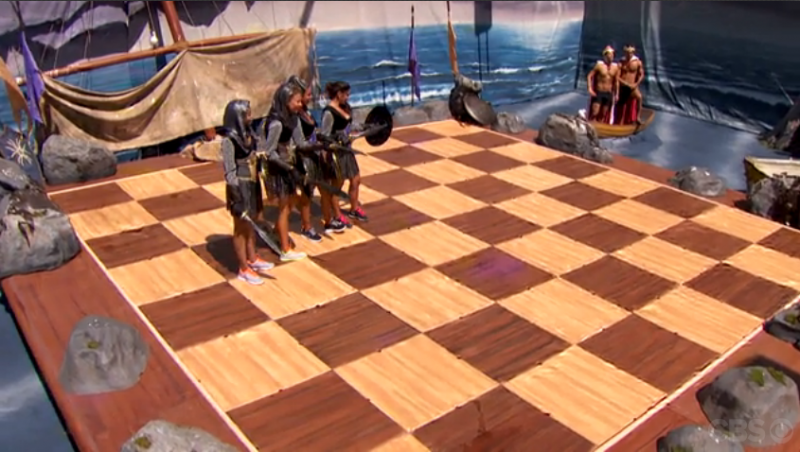 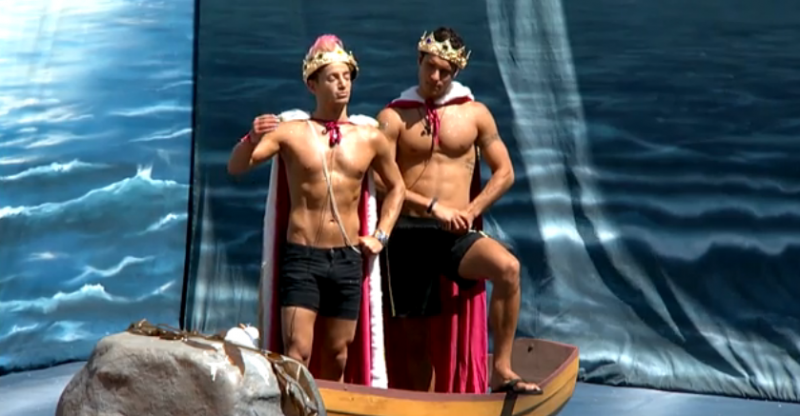 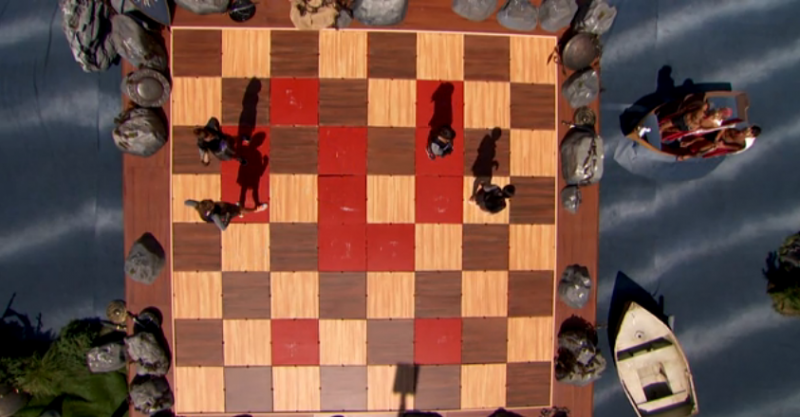 This competition was a nautical-themed chess board with the 4 nominated “knights” competing to the death.  You had to keep moving until you couldn’t, which became a challenge as each square that was used was made ineligible for anyone else to land on afterwards.  It’s a fun strategic game to watch, if a little slow, but in the end, Amber and Victoria were the last two with Amber making the last move.  Amber and Jacosta were saved! 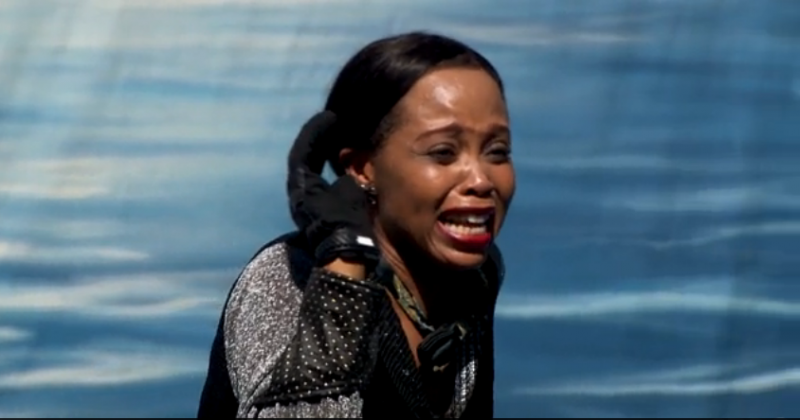 I don’t even know with this one. The noises she was making as Amber was about to win were otherworldly, and certainly not English.  I thought she was starting to freak out because she was about to lose, but I forgot that Amber was on Jacosta’s team!  It was truly strange to behold as this was her celebration but it really seemed she was communing with something.  But trust in this Jacosta – you’ll ALWAYS be a target in this house as you are an unabashed floater and hence an easy target to nominate.  Good luck! 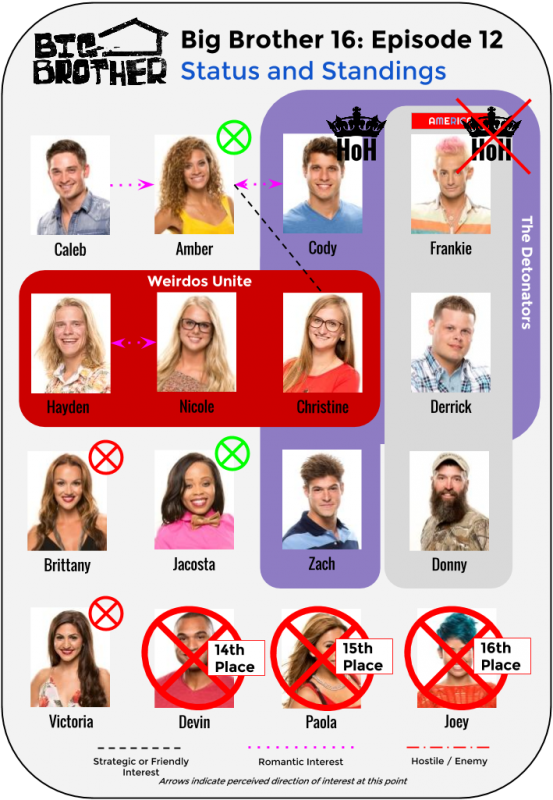 I’ve been speculating about the various ways the game may go forward, and drew the line linking Amber with Christine as I really think that’s going to happen.  Of course, we now have The Detonators as a formal alliance, while I’ve dropped the Bomb Squad officially.  It’s dead.

Brittany and Victoria are certainly in an unpleasant position, but Cody’s cryptic hint at the end that he still has his eye on bigger targets, with a flash to Caleb, shows that they shouldn’t give up hope.  Victoria mentioned that it made no sense for her to be constantly targeted when there is such big game still around, and it’s true.  I’m just curious to see if Cody’s got the cojones to make that kind of move, now that we’re starting the middle point of the game.

The Competition Isn’t Over, Guys 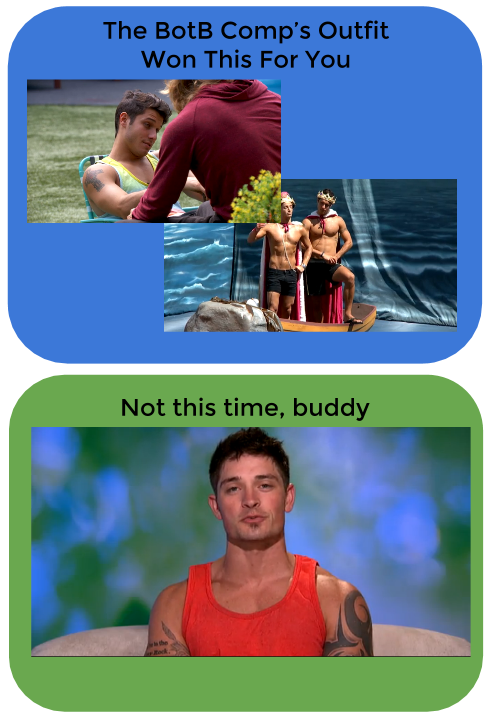