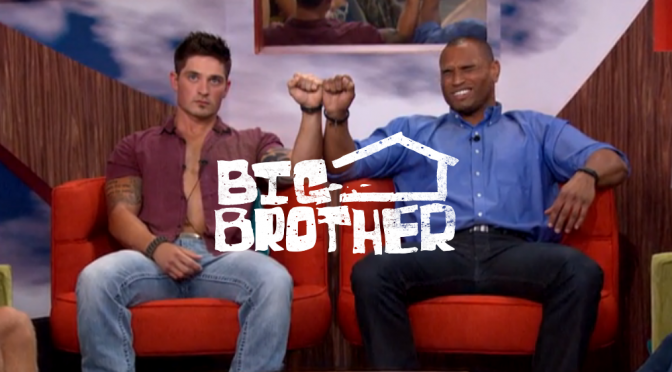 What a waste of 45 minutes! Â I know they can’t all be winners so it’s not as if I’m turning tables upside down up in here, but seriously, there was so much padding in this episode. Â Believe me, this post really isn’t going to be that long as NOTHING OF NOTE happened except for the eviction. Â And that eviction was apparently the plan the whole time and everything else was razzle dazzle. Â What do I speak of? Â Glad you asked!

Did CBS spend almost a third of this episode showing Cody’s machinations as he warmed up to Devin, then send out an idea of evicting Caleb insteadÂ with Zach, leading to Frankie, then to Christine, and then to Derrick? Â So much intrigue, and once we got that vote, absolutely for nothing. Â I don’t see how it plays into anything next week either – unless everyone uses it against Cody. Â And if that happens, then Cody REALLY fucked up by yacking it up so much and NOT ensuring that Caleb was going home.

Slightly-Not-A-Waste Note: Â We did see a bit more of the showmance side of things, and that not only did Amber reveal how happy she was that Cody was stroking her leg, we also saw some almost-smooches between Hayden and Nicole. Â I think Victoria cock-blocked both of these situations. Â Way to go, girl!! You’re the true threat in the house!

Waste #2: Â Down Home With Donny

I couldn’t care less (<– Note, Weird Al, I used this properly). Â I like Donny a lot, but that whole visit with the excruciating Jeff Schroeder was far too much. Â Too much. Â Believe me, it’s nothing personal against Donny either – I LOATHE the visits with family and friends. Â LOATHE IT.

I guess that’s all the official “Wastes.” Â But that took up like half of the airtime, if not more. 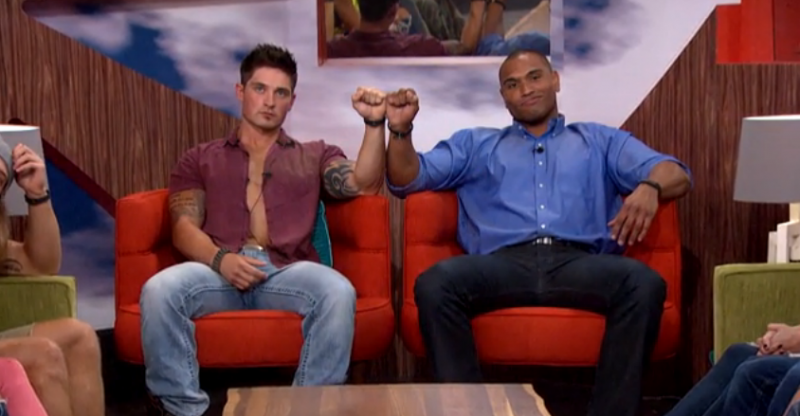 Although the episode built up that maybe JUST MAYBE Caleb was going home, it ended up being a unanimous vote to evict Devin who definitely knew he was going home when he reacted as shown in the very top picture of this article. Â That was pretty funny, actually. Â By the end, Devin certainly became more tolerable, but it was because “his army” (thanks, Jacosta) truly did turn on him and he no longer had any true power. Â Once that madness burned out, he was back to how he was around the first 10 minutes of Episode 1. Â Let’s not kid ourselves that it took much more than about 15 minutes in there before Devin started down the path that led to where he is now. 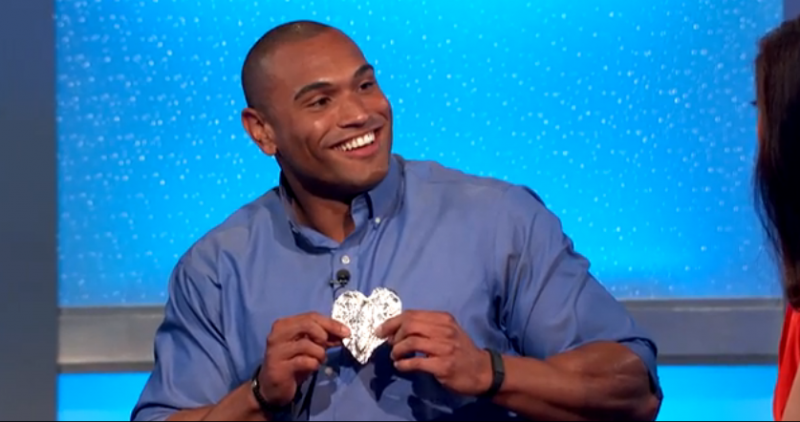 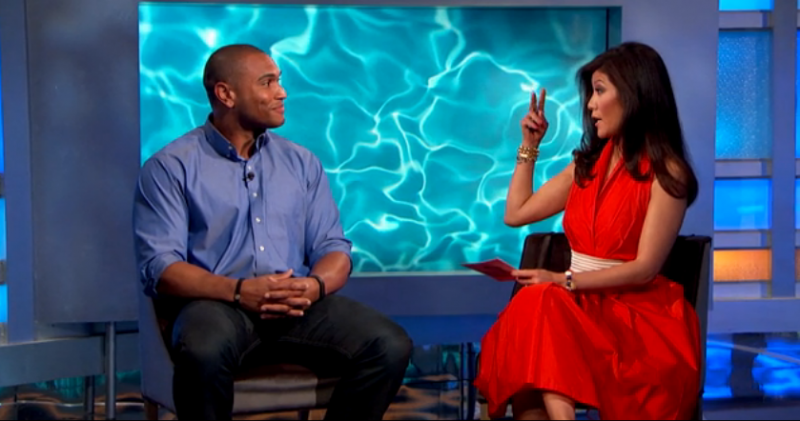 So goodbye, handsome giant Devin. Â I hope you and Caleb one day have a great time running a B&B up in Vermont while raising your daughter – it truly will be a beautiful thing. Â  You tried your best and I think it shows that the BB house is certainly not for everyone.

The HoH Competition: Let it Begin 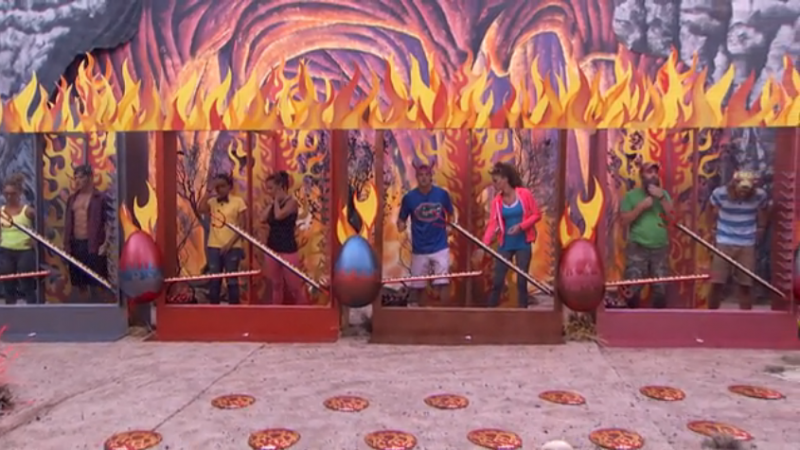 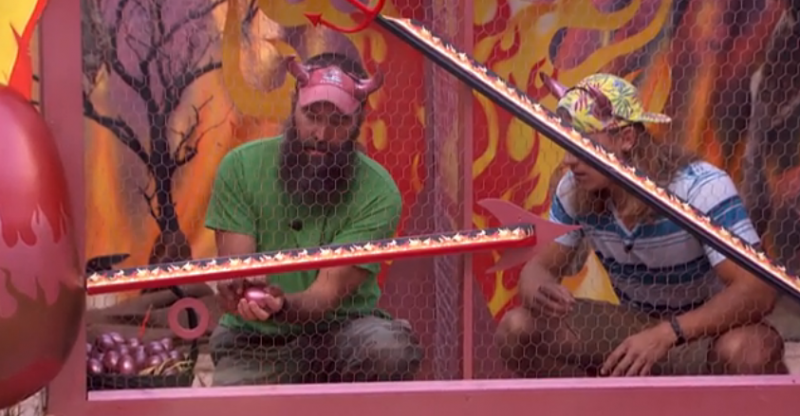 A hellscape awaited the houseguests, who were paired up by random draw and then put in individual cages to transport 12 eggs through the course. Â It’s one of those that will take forever to actually finish, hence we’re not seeing anything till Sunday. Â BOOO.

From the pairings, I think Caleb is screwed as Nicole was making fairly shitty progress in this. Â Cody and Frankie could be a threat as they’re pretty aggressive. Â Victoria may as well take a nap with the speed she was moving at, screwing Christine in the process. Â I think Amber and ZachÂ were moving along pretty quickly though. Â Guess we’ll see how it all ends up!!! 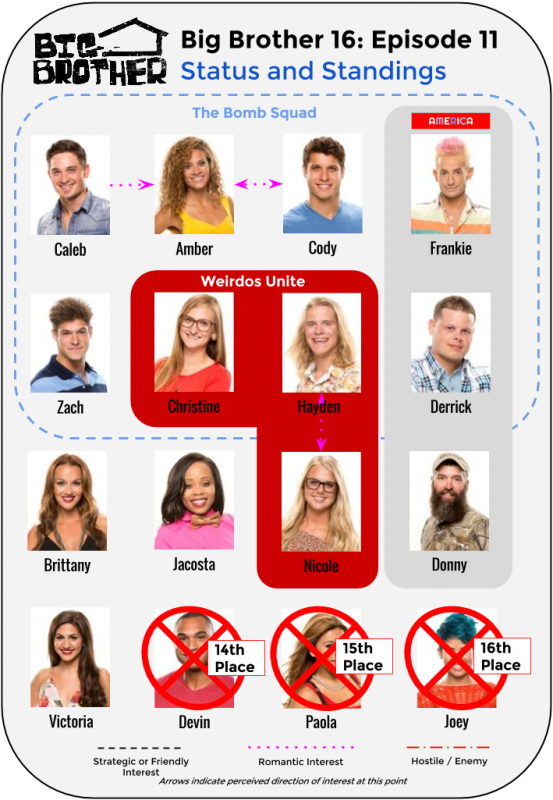 This episode’s Alliance Chart takes Devin out of the equation as well as realigns some pictures to help illustrate romantic ties. Â  There’s really no open hostilities at this point, nor are there strategic partnerships not captured by the alliances already indicated. Â Yet! 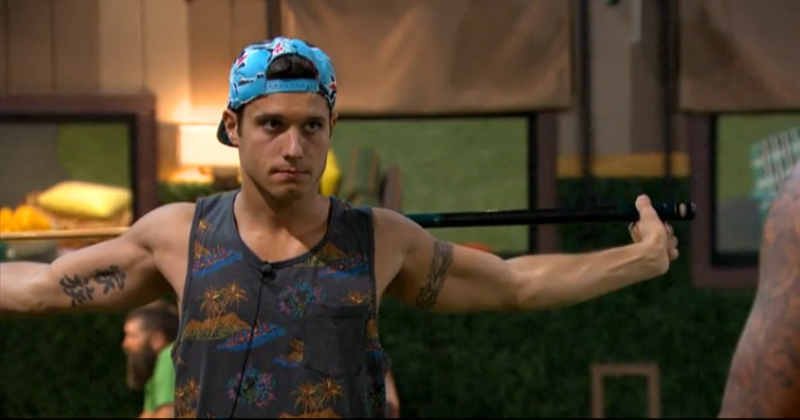 I think the house made a huge mistake in keeping Caleb over Devin. Â More precisely, Cody made a huge mistake in keeping Caleb. Â I have no doubt that this week it will get back to him that Cody was considering ousting Caleb. Â So maybe the house as a whole was good with Devin’s eviction as he was a loose cannon/wild card, but my boy Cody will need some alliance help to keep him from being the target. Â HeÂ has to win HoH this week to guarantee his safety.

Right now, I’m not feeling either of them too much….but I’ll make a decision as I know it’s important to ensure the clocks keep running. 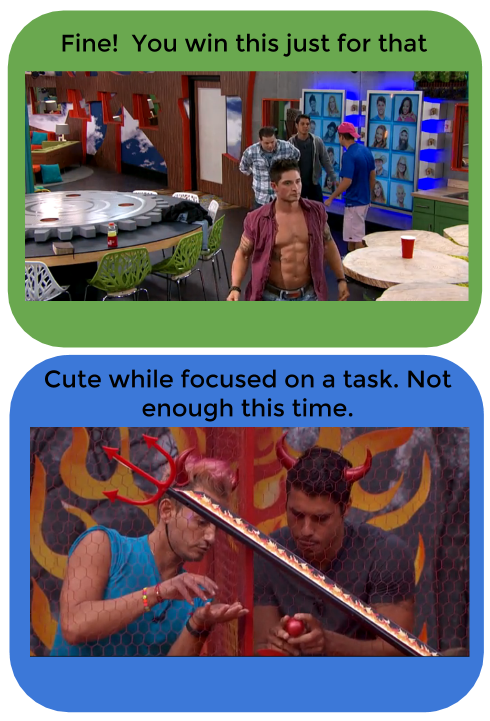