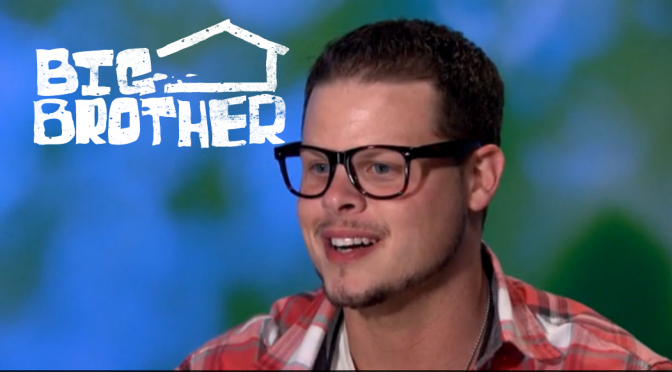 Derrick is truly emerging as the Player to Watch this year, isn’t he? Â And it is all coming so easy for him – I’m almost wondering if there’s even anybody there who will be much of a threat to his machinations? Â Honestly, only Christine seems to have much strategic acumen, at least from what has been shown to us. Â The other “power players” (I’m being generous) like Caleb, Donny, Devin, Zach and Frankie have some potential, but it seems Derrick is playing quite a few steps ahead of even them. Â Nicole seems way too sweet for this game, while Amber has shown little inkling for making moves. Â I hope I’m wrong – I’d love for someone to surprise me and come up as a valid yang to Derrick’s ying, but I wouldn’t be shocked for Derrick to be sitting up in the Final 2. Â Calling it now!!! (oh, and BTW – is Derrick sometimes hot? Â I’m not sure….but that title image isn’t too shabby, is it?)

Is There a Bomb Squad Anymore?

In my episodic status sheet, I’ve kept the outline of the Bomb Squad, but it does seem that now that Devin has made sure everyone knows about its existence, it is likely not going to be a real “thing” for much longer. Â Right? Â And his clumsy maneuvering to try to make sure he was nominated was utterly transparent. Â Dude, pretty much everyone there knows how to play the game and you are Enemy #1. Â Hence, as you yourself said this episode, “I came in through the front door but they’re trying to send me out the backdoor.” Â Yep, because that’s what you do in this situation. Â BUT, I think you have the CBS Gods behind you and you’ll likely get picked for Veto. Â It would make the most dramatic sense, and I’m not naive enough to think Producers won’t manipulate things to get the most exciting show. 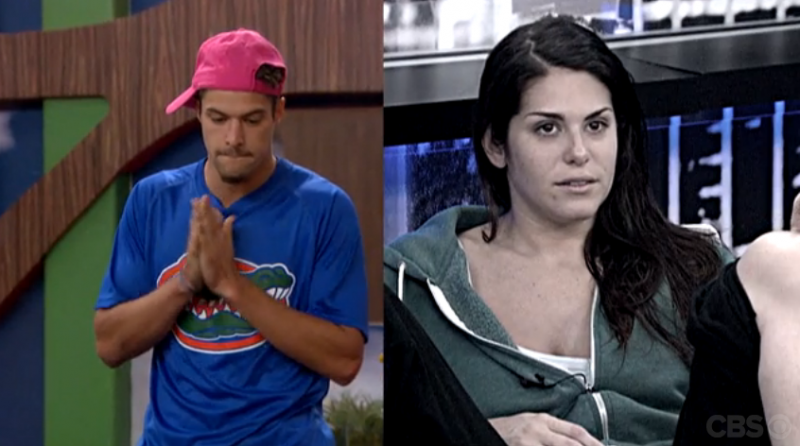 Had to admit that time has healed those wounds from last summer, when Amanda lost her damn mind. Â She was such an awesome presence to watch, at least for 3/4 of her time in the house. Â So to see her (presence) get brought back in and as part of TeamAmerica’s task to make 3 other houseguests pass on a rumor that a current houseguest is related to a previous one….well, it was great. Â Even better is that Zach isn’t too far off the mark from Amanda’s brassiness, but Amanda had a lot more strategy. Â At least at the beginning!

Nicole and Derrick realized that they had to get blood on their hands. Â Nicole admits she didn’t even want to win HoH at this point. Â So to make the least waves, Nicole intends to put up Amber. Â Derrick knows that Caleb will gallantly ride in to save her, and plays him like a fiddle:Â 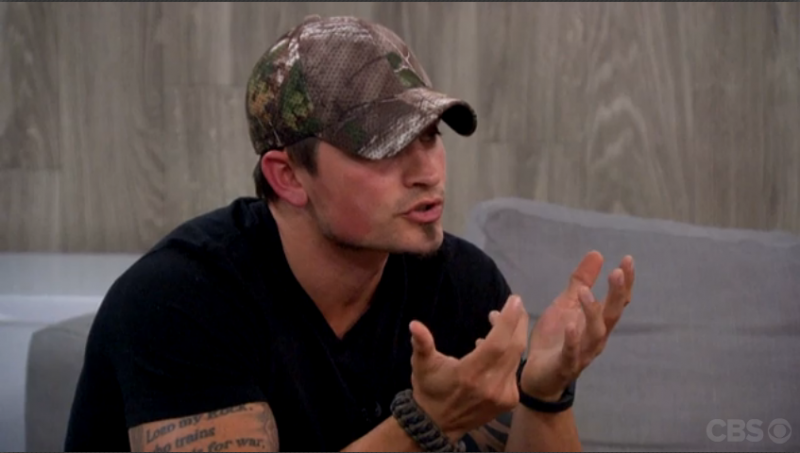 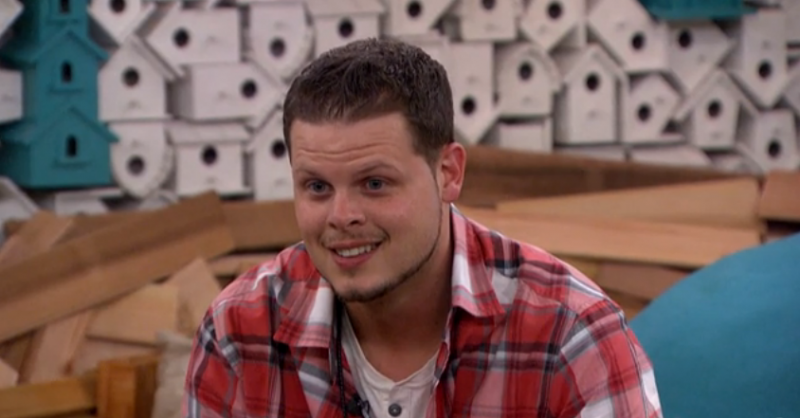 That is Derrick’s “I can’t believe this fool is buying everything I’m selling!” face. Â So that’s another easy nomination. Â The problem comes in who are the last 2. 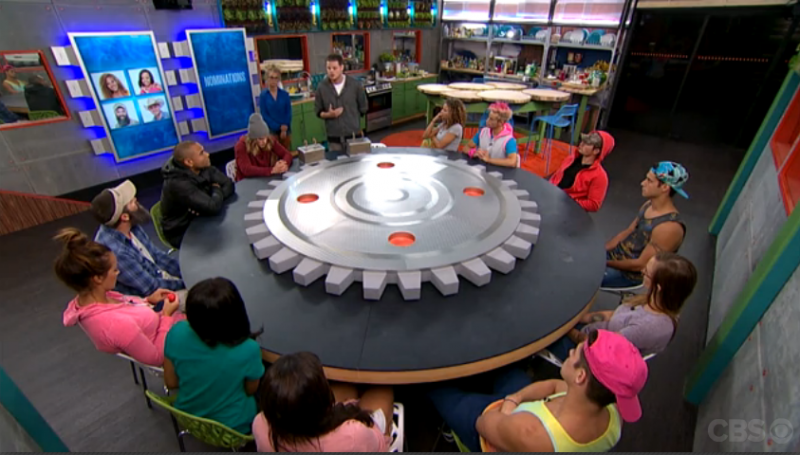 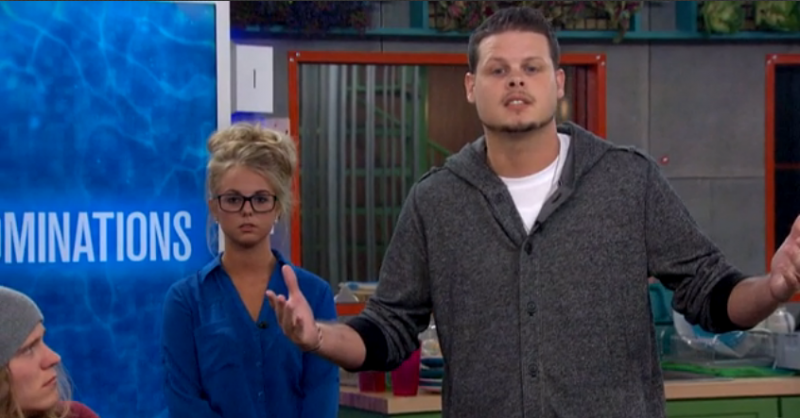 Well, Donny makes it kind of easy for Nicole as he goes off and runs to Brittany and Jacosta about the Amber-Caleb plan after Nicole tells him about it. Â But of course Nicole finds out about Donny’s blabbing as Amber hears him do it. Â Why the hell would Donny be so careless? Â Anyway, this pisses Nicole off so Donny is nominated! Â Jacosta gets a nomination from Donny because why not? Â Nicole and Donny both hilariously miss Paola as they needed a non-controversial 4th nominee! 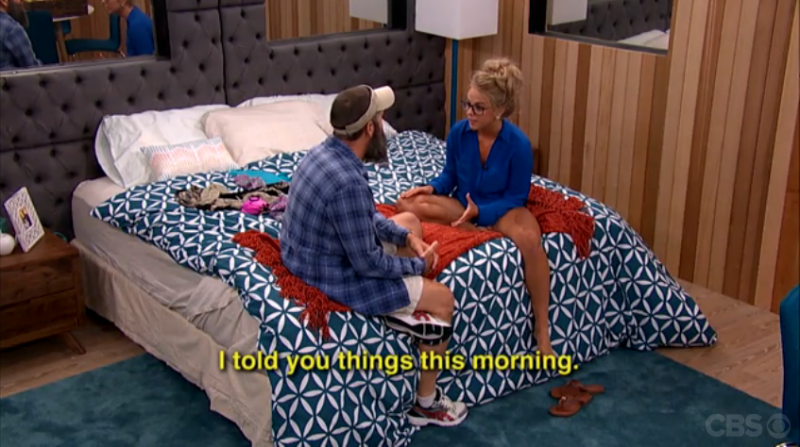 This is the point where it becomes clear this game isn’t for Nicole in the long run: Â she instantly regrets putting Donny up. Â They hug it out of course, but damn, Nicole. Â Own it. Â I like Donny too, but if you weren’t prepared to put him up, then you shouldn’t have.

It’s still primarily a one-way relationship here, but it’s adorable. Â They really are funny together all while she’s repeatedly brushing him off. Â It’s an affectionate brush-off though, so I’m wondering when she’ll succumb to Hayden’s growing charms. Â YET, I am encouraged that Hayden is a good sounding board for strategy. Â He reminds her that Donny is obsessed now with “those 8” (the former? Bomb Squad). I still have hope that Weirdos Unite can somehow be the worthy opponent to Derrick to prevent this from being a steamrolling to September.

Battle of the Block, Week 3 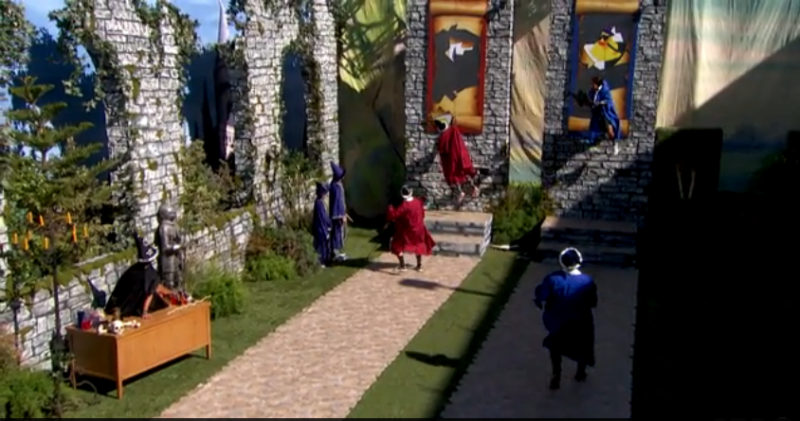 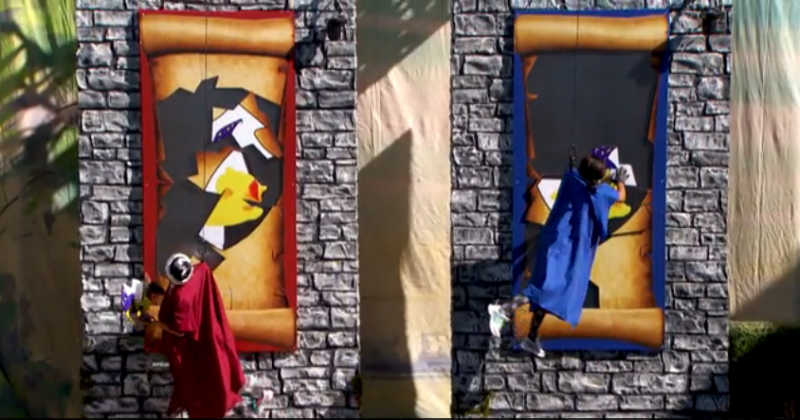 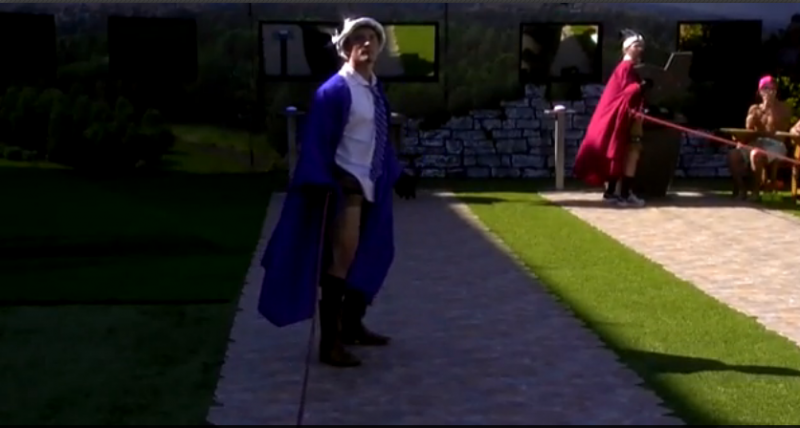 We got some Harry Potter copyright infringement right here, don’t we? Â The two teams had to race to finish a wall puzzle, with one member on the ground and pulling the other up via pulley. Â Caleb was already fully down to throw the competition to ensure Amber got off the block. Â Poor Jacosta had no chance. Â There’s really not much else to discuss….EXCEPT:

HOLY SHIT, IS CALEB WEARING HOT PANTS TO THIS CHALLENGE? 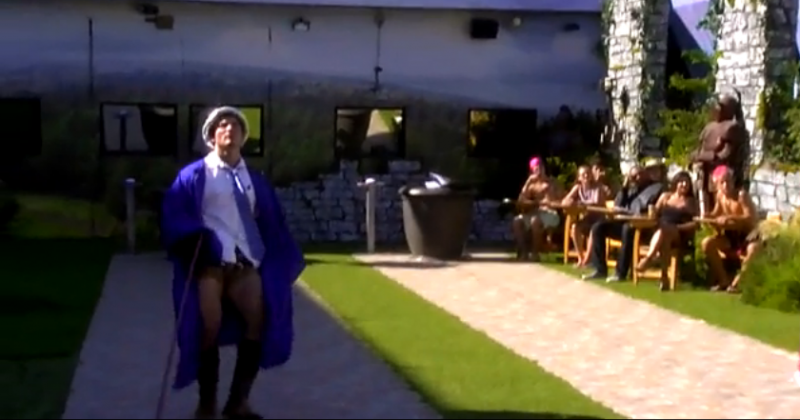 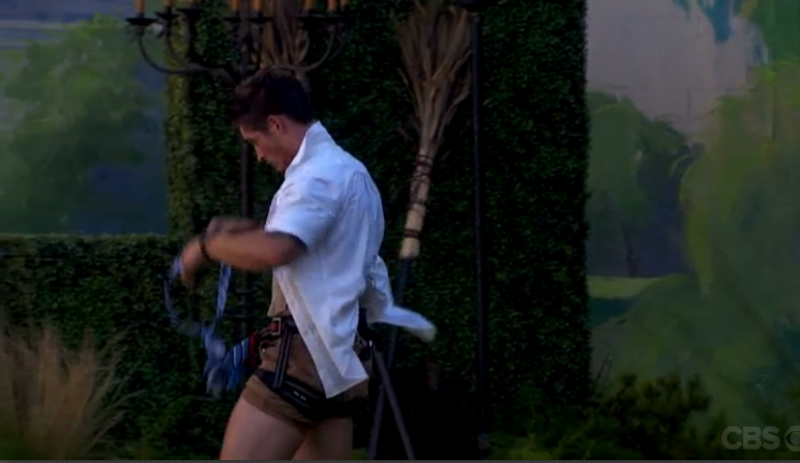 Â His “heterosexuality” is constantly in question on this here blog, but come ON. Â Am I complaining? Â Hells to the NO, but I think I see why Amber is not really reciprocating – she knows something else is going on! Â All I know is he is rocking the SHIT out of those hotpants. Â Look at those legs!?!? Â He’s a (lack of) white shirt away from being the hottest go-go boy at the Abbey, that’s what I’m saying. 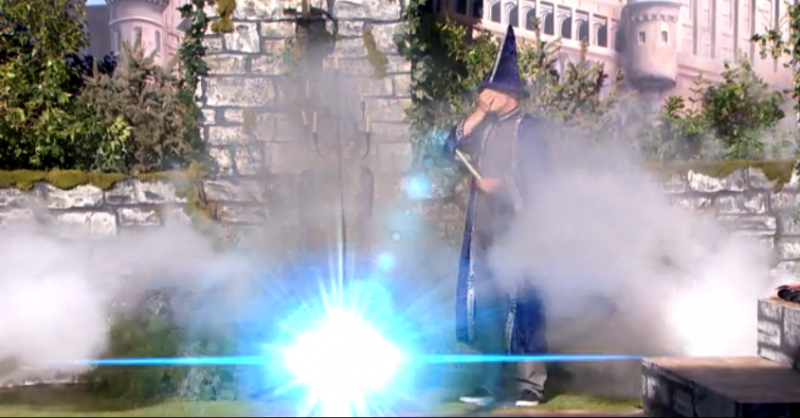 ANYWAY, in the end Caleb and Jacosta lose this week’s Battle of the Block and Amber and Donny are saved! Â Thus, Nicole is deposed as an HoH and is magically whisked away by Brittany. Â  Â SMFH. Â Why did there have to be that ending confusion put in as if Brittany truly made her disappear? Â SO FUCKING CHEESY. 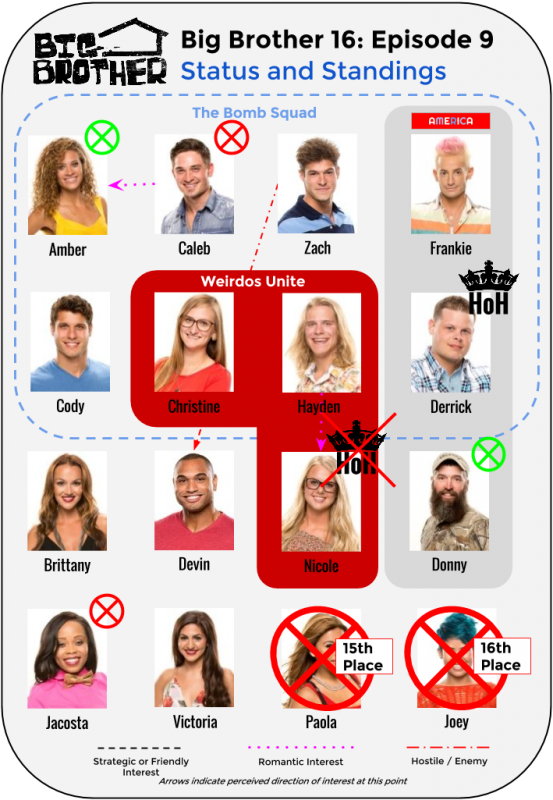 Yep, the Bomb Squad is just an outline now. Â If there isn’t any forward movement with them as a group in the next episode, it’ll go away and just be a memory soon enough. Â Who KNEW an 8-member alliance wouldn’t make it long term? Â 🙂 Â I also got rid of the lines betwen Devin and Brittany as that was just assuming too much on my end; also the Zach and Frankie line is gone – I’m not sure if Frankie is willing to tie himself to Zach anymore. Â It does seem that we only have 2 strong alliances at this point, which makes sense. Â Look out, everyone else!

And Last but NOT Least 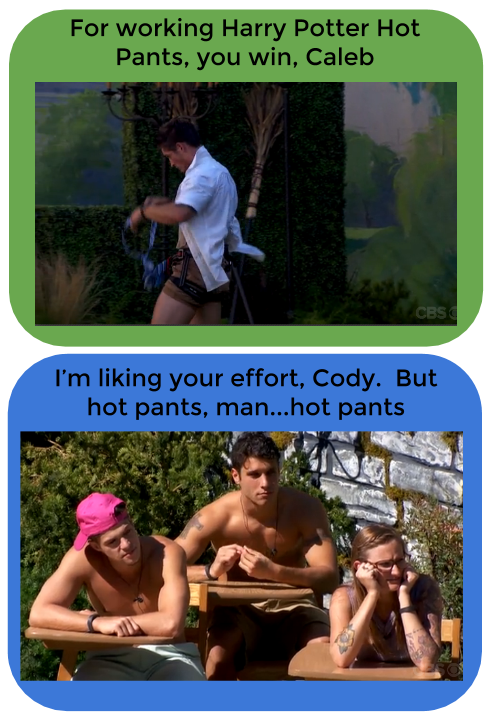