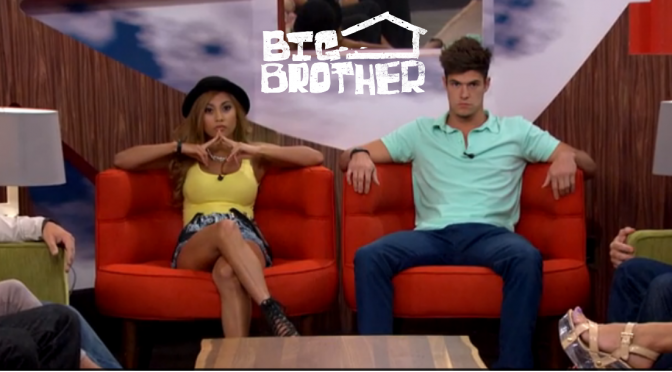 Of course, in the Big Brother house, “Positive Thinking” is about being as big an asshole as possible, but hey, “When in Rome?” Luckily for Zach, forces outside of his control came to his aid, namely in the form of Derrick. Â I must admit that despite all the flash and razzle-dazzle going on around Devin and Zach’s antics, Derrick has been a rock and focused on the prize. Â Suddenly I see a Final 2 contender!

…The Power of Veto, continued! 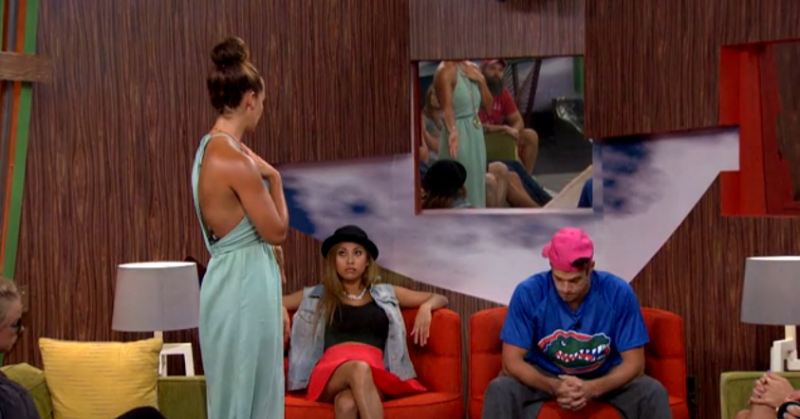 When last we were with our houseguests, Brittany wanted to say one more thing after Zach was put up on the block by Devin. Â Turns out BrittanyÂ needed Paola to know exactly why she is targeting her, which then led to Paola admitting to Devin that he had asked her to throw the BotB comp, but she denies having done so. Â Devin takes issue with that and it all gets dramadramadrama. Â 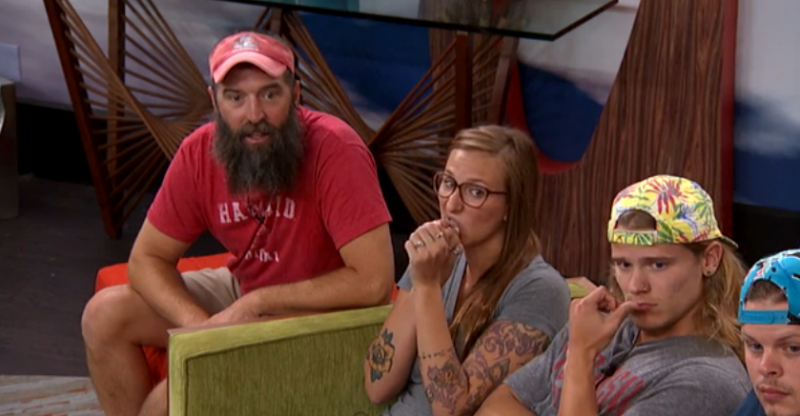 As Donny points out, the verbal back-and-forth is like a tennis match and everyone is completely enthralled. Â Zach is feeling left out though and once he notices a pause in Devin and Paola’s debate, he leaps up and says it’s his turn. Â Oh boy. 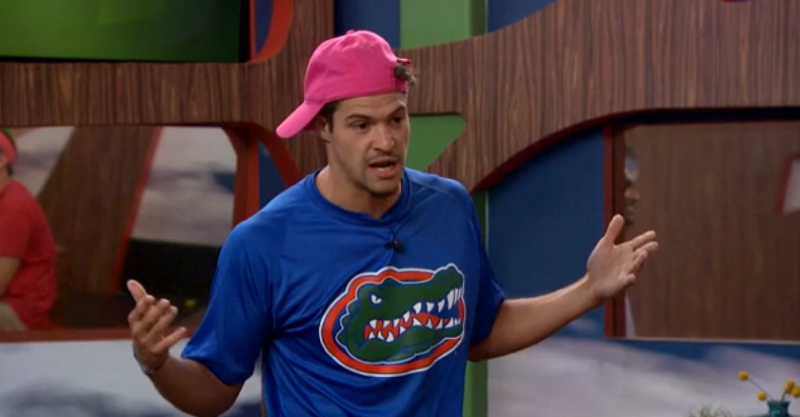 As is now to be expected, Zach just spews a lot of word vomit. Â He’s really bad at making his points, and in the process of doing so, pisses off and alienates his one true ally, Frankie. Â But he does make some bold claims, primary of which is that there’s no way he’s going home this week AND Devin will be his target if he stays. Â That gets people’s attention, that’s for sure. Â 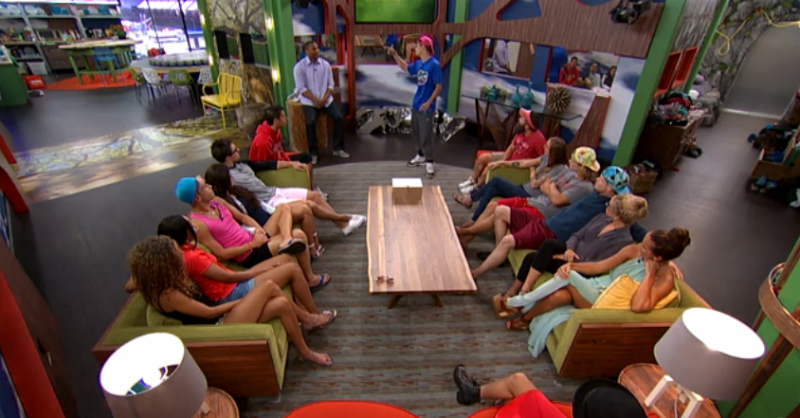 Then there’s of course the low blows, which is to be expected from Zach, and not entirely unwarranted towards Devin though. Â Devin manages to take it all without lashing back at Zach, when at the end he just wishes Zach luck with that. Â 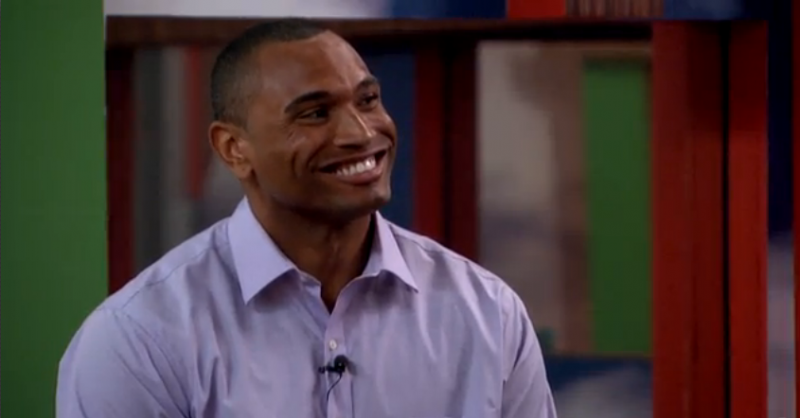 This whole discussion set the stage for the rest of the episode, as the house really started thinking more about what would make sense for the game in the long run? 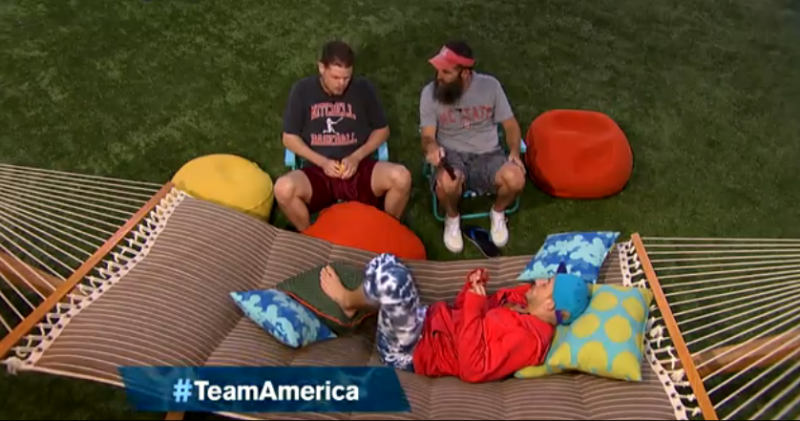 Let’s be honest here. Â Derrick is the one running this alliance. Â Frankie is really animated and Donny is super sweet, but Derrick is the one who is making moves here to ensure his game is going to go where he wants it to. Â I think he realizes that this TeamAmerica alliance is a godsend and can be used to ensure a 3-vote bloc is always under his control. Â Of course, it won’t readily seem like that. Â Case in point: Â Frankie was mighty skeptical of keeping Zach in the house, and advocated for Zach’s eviction. Â Yet Derrick steered the conversation skillfully to the fact that Zach was absolutely NOT a threat to them but Paola, as scatterbrained as she is, could be a weapon against them by a skilled opponent. Â Donny agreed, and showed he’s ready to play by saying that while he loved Paola more than anyone, that won’t stop him from voting her out.

Zach should worship at the altar of Derrick. Â Derrick’s been the sneaky voice of strategy to keep him here, even convincing Caleb of that action once he makes him realize that the Zach Attack is against Devin, not the rest of them.

But Wait, What About the Bomb Squad? 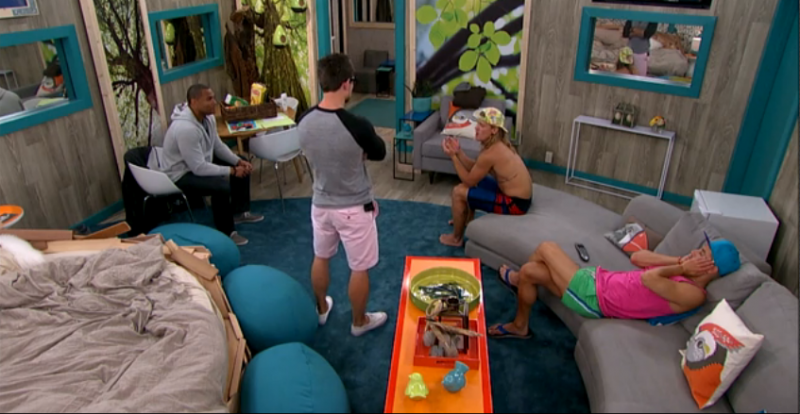 Caleb and Devin HAD been strategizing as well, having decided to kick Zach out of the Bomb Squad and replace him with Hayden. Â Why does there need to be 8 people in this damn thing? Â Anyway, Hayden accepts this “offer” as really there wasn’t any choice. Â But he made it clear to us in the DR that his goal will be to bring it down. Â Now THAT is what I want to hear. Â I’m loving Hayden and hope that he and the Weirdos Unite do some serious stealth damage.

But Wait, Seriously, What About the Bomb Squad?

What, that wasn’t enough for you? Â FINE. Â  So Frankie, in what I think is misguided loyalty to “the Bomb Squad / Devin,” decides that Devin should hear that everyone has decided to keep Zach despite Devin’s wishes. Â At this point, Devin is OVER IT. Â When Frankie points out that the Bomb Squad now has 8 +1 members with Hayden, Devin is like PEACE OUT, it’s still 8, I’m just not part of it. Â And in true dramatic and misguided fashion, Devin points out that he’s going to single-handedly evict every single person out of this house. Â Now THAT is positive thinking, people! 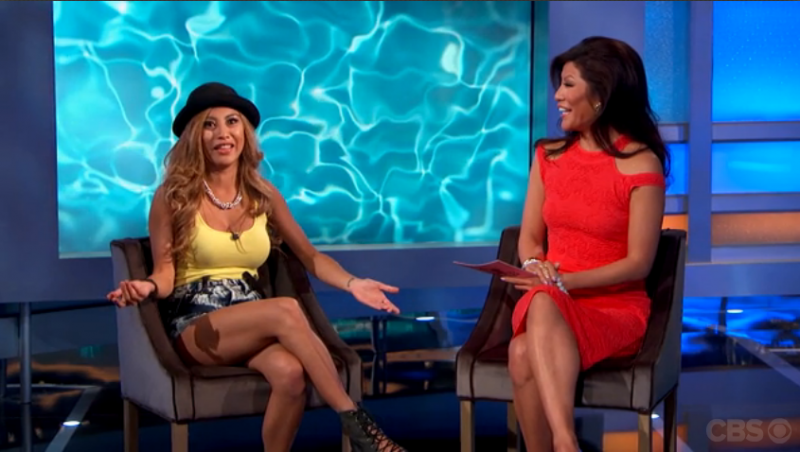 Knowing what we do, it still seems like the vote could go either way. Â Alas, at least for Paola fans, Derrick’s work to save Zach (despite Zach’s best efforts, seriously) paid off and Paola was eliminated, 10-2. Â Her friends, Jacosta and Donny, were the only ones not to vote against her. Â I think Jacosta isn’t even playing so who knows why she votes the way she does; Â Donny was a pure affection vote, but he knew full well that she was leaving and his vote wouldn’t impact things.

Paola acquitted herself pretty well with Julie in the inteview, coming across as pretty humble and saying the right things about how much she doesn’t like Devin while also mentioning how even she was surprised at the fact her best friend in the house was a 42-year-old Bearded guy. Â Can’t say I’ll miss you all that much, Paola, but you WERE feisty and entertaining while you were in the house, I’ll give you that. 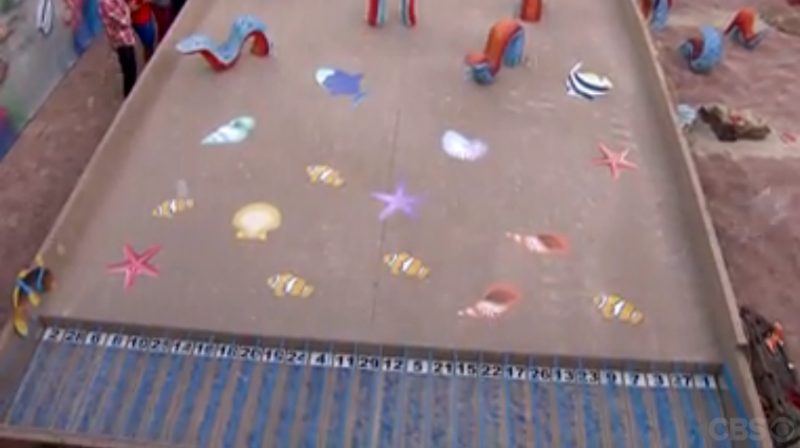 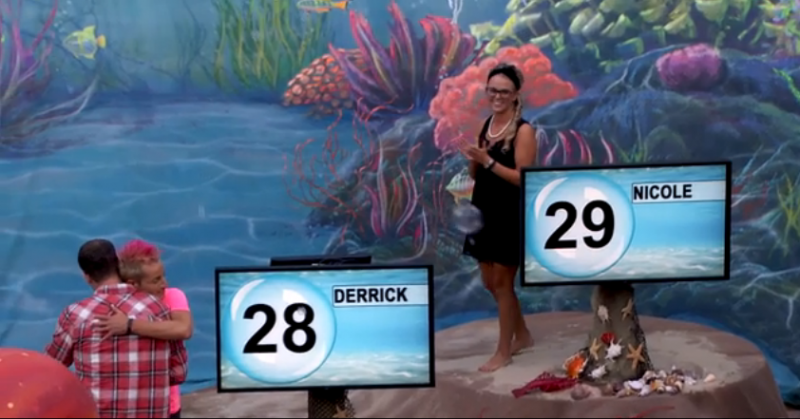 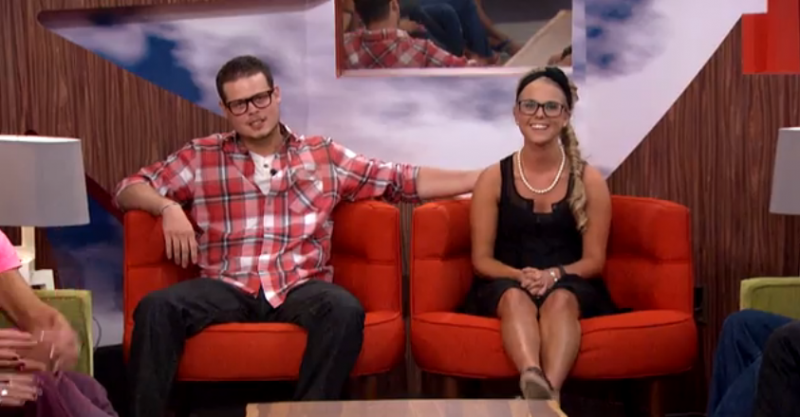 So in the Plinko-esque HoH competition, each houseguest had to roll a croquet ball across an under-the-sea themed course and hope to put their ball in a high-scoring slot. Â Nicole shot to the top and got the top score near the beginning, and Frankie almost got 2nd place until Derrick, in the final position, got the 2nd highest score. Â I’m intrigued by this new set of HoHs. Â One (Derrick) is playing a shrewd BB game while the other (Nicole) comes across so earnest and humble but is also playing a sneaky game of her own having made the Weirdos Unite alliance. Â This week though, both are going to have to get blood on their hands! Â It will be VERY interesting who they put up – will the “low value” targets get put up (Brittany, Victoria – remember her?) or some more strategic ones (Devin, maybe Zach)? Â Will their respective alliances suffer or be discovered? Â This week certainly looks to be mighty different from the previous ones, that’s for sure! 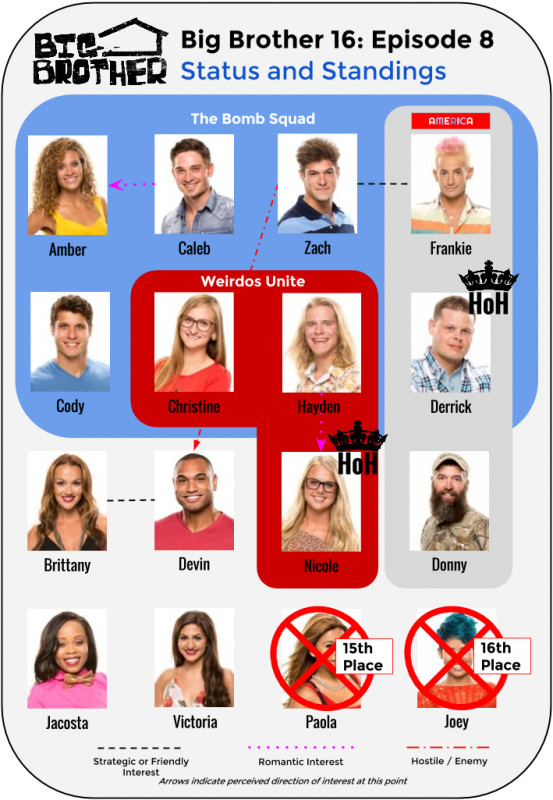 More rearranging in the chart! Â First, booted Devin out of the Bomb Squad, and reinserted Zach into it while also adding Hayden. Â I put some interesting lines in too: Â I tied Devin and Brittany together, as they could work together still; Zach’s rage towards Devin is crystallized; I’ve kept Frankie and Zach together, but we’ll see if that lasts.

And can I say? Â The casting folk HAVE to be disappointed in Jacosta and Victoria. Â Even freakin’ Julie Chen shaded Victoria with her comment about how low she’s laying in the game. Â They both seemed to have bigger-than-life personalities but in the house, they seem to be as backgroundy and floatery as you could ever hope to be. Â I wouldn’t be surprised if they’re nominated this week. Â Just sayin’, as their nomination would impact absolutely no one. 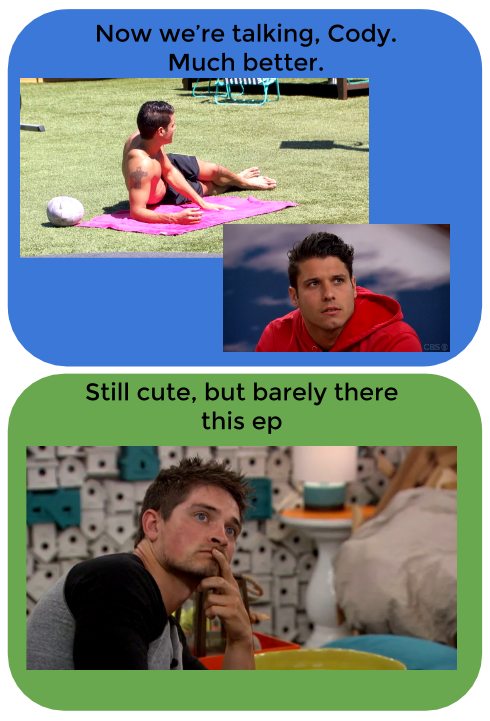