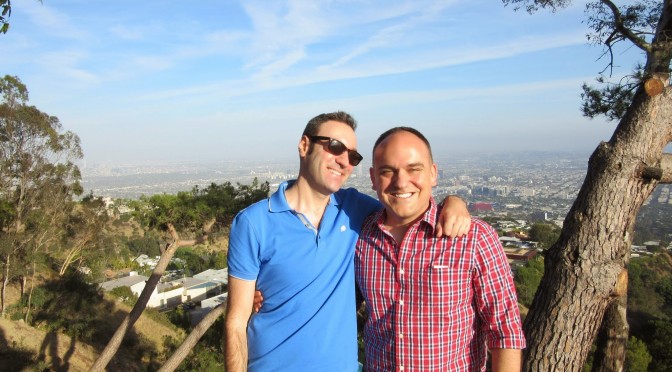 Thanks to Larry, I’m able to now say that I’ve been to a Hollywood Hills shindig.   I’d always thought it would be the coolest thing to do, but honestly, it’s not something that someone like me would have the occasion to do.  Different circles and all.  I’d also wanted to go to a NYC “loft” party too but that never happened either.  Same reason.  But last night, Larry’s friend from college, Doug, was back in town for work and had rented a house up in the hills via Airbnb.  Larry looked it up ahead of time on the site and when we both looked at the listing, our jaws dropped.  Was this for real?  It’s a house located on the top of the hill with a fantastic overlook south into Hollywood and all of the other homes.  Ridiculous.

I was definitely nervous though but my excitement for getting to do all this made me get over it.  We got up there first and had a chance to hang out with Doug and Sloane for a few hours and enjoy the sunny and spectacular view.  Larry also managed to cut the shit out of his ear somehow by somehow slamming it in the car door (?) the first minute we were there, but luckily while there was a lot of blood, stitches and a trip to the hospital weren’t needed.  As the sun set, more people showed up and we got a chance to meet some very cool folks.  I also drank a good amount and I’m paying the price today….stupid hangovers.

So yeah:  a major bucket list item has been checked off.  And it was awesome.  Thanks Larry and thanks Doug!

The dining room and kitchen area

The awesome house with all the windows

Stupidly expensive homes, below us

Larry and his injured ear

The shower lets it all be seen

Nice pano of the view

No safety rails there – drink at your own peril

Some stellar homes right below

The upstairs level, which is swanky as hell

The setting sun’s glow was gorgeous

Enjoying the view and the alcohol

Once the sun set, the fog came in quick

Ah, Los Angeles – at least what we can see of it before the fog and clouds came in