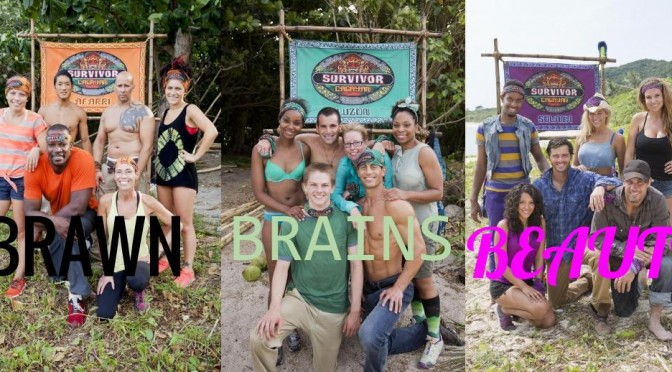 I definitely don’t have the motivation to do as much work on a Survivor recap as I do the Amazing Race, but that isn’t going to stop me from doing something.   So the premiere of the 28th season was last night and it was epic.  EPIC.   But to get things started, I’ve collected some pics from the episode for your perusal, as damn(!), there is plenty to look at.  I’ve got nothing for ya if you’re looking for chicks though.

Spencer & Garrett of the Brains tribe

David and Garrett of Brains

There was a veritable treasure trove of good-looking guys. But that wasn’t too surprising since the theme of this season, at least initially, is Brawn vs Beauty vs Brains.  Ugh, I know.  It’s such an annoying concept.  But if you actually watched the episode, you ended up seeing that despite those conceits, the two-hour block was a lot of fun.

Why was it fun?  Because we got to watch the sheer insanity that went on at the Brains tribe:

In the end, the first two eliminated were both from the Brains team:  David (who played the wrong game; as written a LOT on the AV Club forum, “playing a post-merge game pre-merge” <– this x1000) and then Garrett, which was a blindside to him as well as to me and I think many of the viewers.  CBS hid it well and made it seem clear that J’Tia was a likely and deserving goner in the 2nd episode – but Garrett’s complete self-destruction at that 2nd tribal council clearly convinced Kass that he had to go.  And go he did.  Mind you, this was AFTER J’TIA HAD PROCEEDED TO DUMP ALL OF THEIR RICE INTO THE FIRE.  They STILL voted him out over her.  It’s almost too much.  But it made for a fantastic start, and I can’t wait to see what happens next.