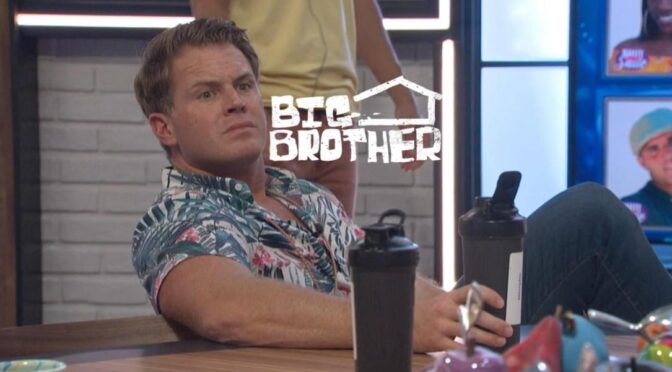 Geez, Memphis gets his first HoH ever and he becomes a bit more Machiavellian than really needed…and honestly, wasn’t very good at being Machiavellian as the main point of Machiavellian strategy is to not really let the other person(s) be aware they’re getting Machiavellied.  Can I say Machiavelli anymore?  NO, I’m done. 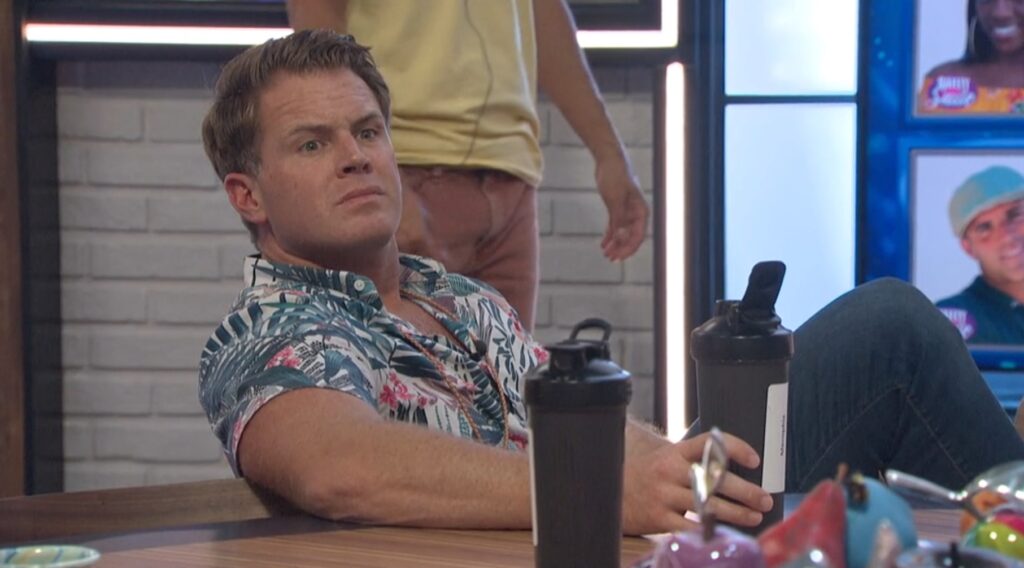 That’s kind of Memphis’ face the entire episode.   He was grimacing while explaining his evil plan of encouraging / forcing as many people as possible to play for Safety Suite, and then even when he revealed his top-secret, dastardly, no-way-anyone-would-ever-figure-out-his-ulterior-motive plan that then only he (and his trusted alliance mates) would be able to play next week (the last week).   NO ONE WILL EVER FIGURE THIS OUT. 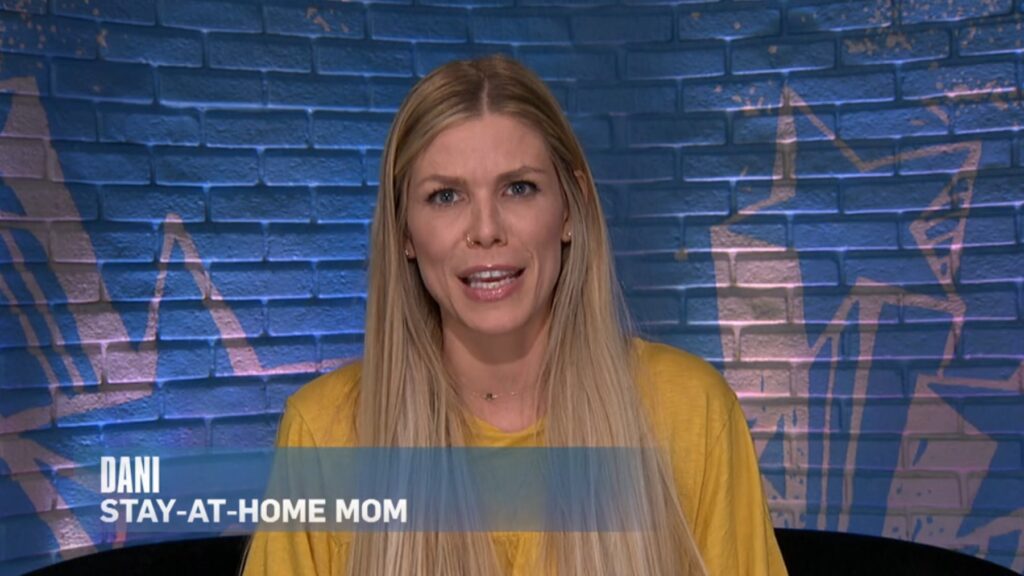 Except for everyone, of course.   Dani here was no fool, neither were the Nicoles.  I think others realized what he was up to but also just didn’t want to take a chance not to go for it.   And then Memphis has to make it not look like he and Cody are in an alliance so I guess that’s why Cody ended up playing for it, and it’s like, isn’t it obvious to everyone in the house where the alliance lines are drawn?  Anyway.

We get a new wrinkle in how Have Nots will be determined this season – the 4 Have Nots will name their replacements.   Ooo snap.  It can’t be yourself or any of the current Have Nots, and this honestly kind of is great as I think there was a pattern sometimes that you’d end up getting screwed for weeks on end being a Have Not.   Anyway, Memphis names David…. 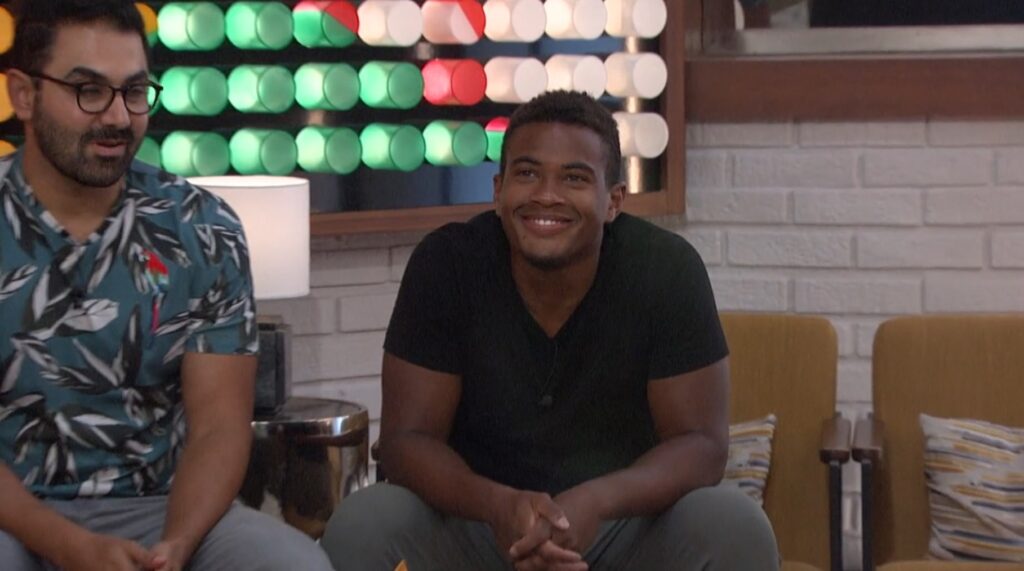 ….and that won’t be the last time David’s name comes out of Memphis’ mouth in the guise of giving David an All Stars Big Brother experience.   Ian names Nicole F (although she volunteers to keep him from stressing about it), Nicole A names Christmas, and finally Kevin names Kaysar.

The Safety Suite is Open 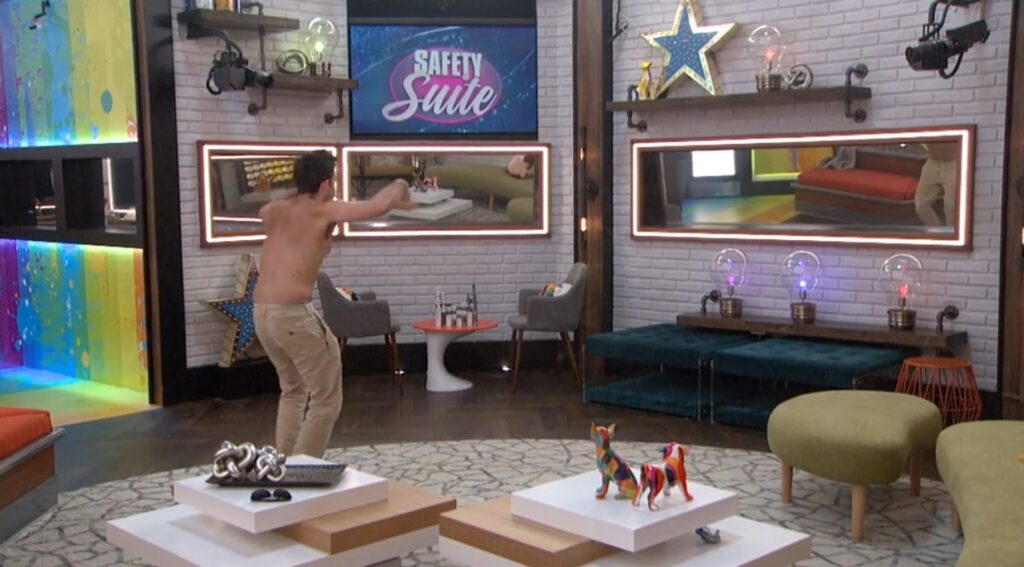 Big Brother amped up the drama a lot this week regarding the hour of Safety Suite open registration.  A lot of convos were happening as Memphis kept up his ‘you all better play for Safety Suite as my mind is not made up yet!’ shtick.  To NicolA, he laid that down and she was turned off by it and ended up not swiping.   Plenty others did though, including David, Bayleigh, Cody, Ian, Kevin, Christmas and DaVonne.  We still have to wait for the competition though, so more convos happen… 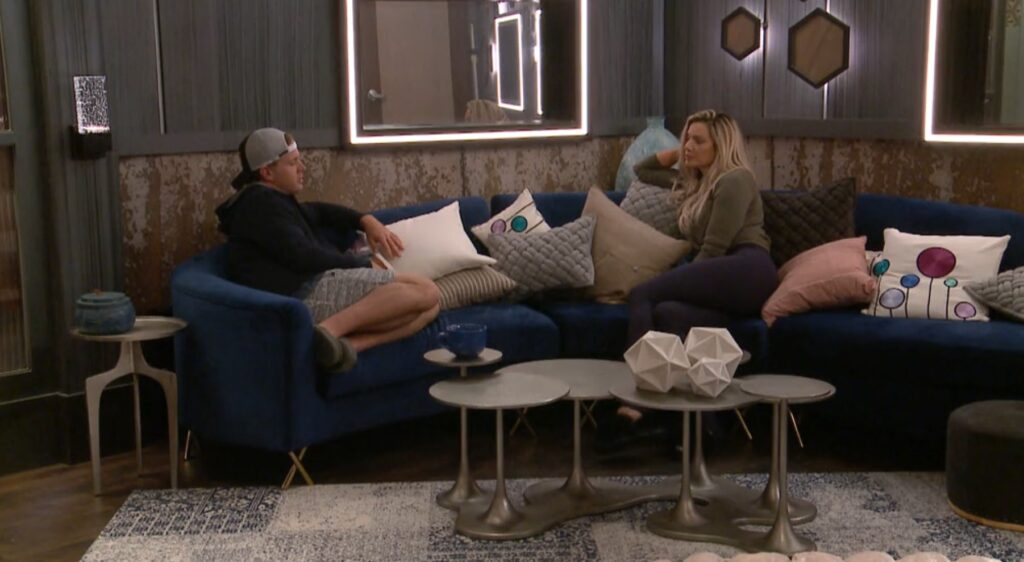 ….this one with the Queen and Memphis occurs, giving me a sense of some hope that Janelle won’t go out this week?   Obviously she and Kaysar could easily be getting set up for a backdoor situation, but she is working the angle hard that they’re both Old School players and there are better targets than her and Kaysar.  It’s true, but still.  Work your magic, Janelle! 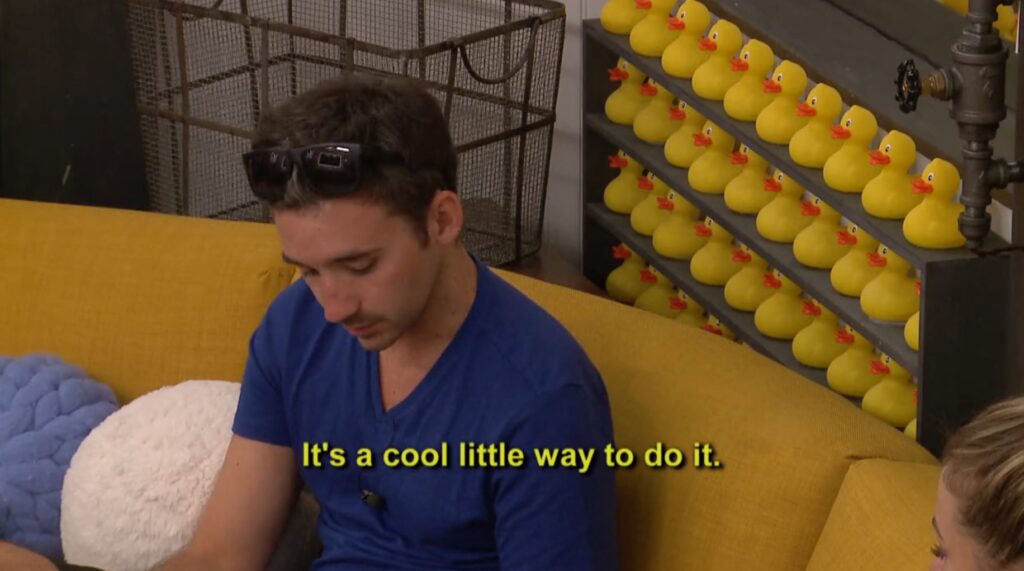 There’s also this conversation between Ian and Christmas which pays off very soon, as he wonders if Christmas would use the +1 on him if she were to win.   She is good with that idea and privately thinks working with Ian will help hide her true alliance but also allow her to play some moves just for her.   It’s smart and could pay off down the road.   It certainly pays off for Ian soon (spoiler!).

The Drinks Will Knock the Table Over! 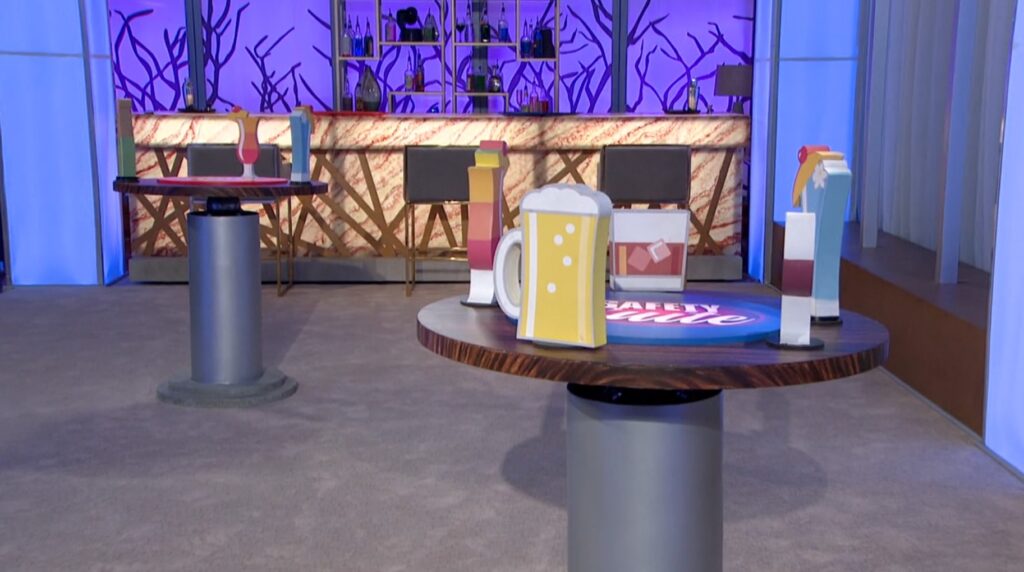 The Safety Suite competition this week is about stacking two sets of drinks on two tables so that the table is balanced – as the table is basically a circle balanced on a ball and the drinks will need to be placed to make each table stable.   A little easier I think than last week’s Remix activity, and the finishing times reveal that to be the case. 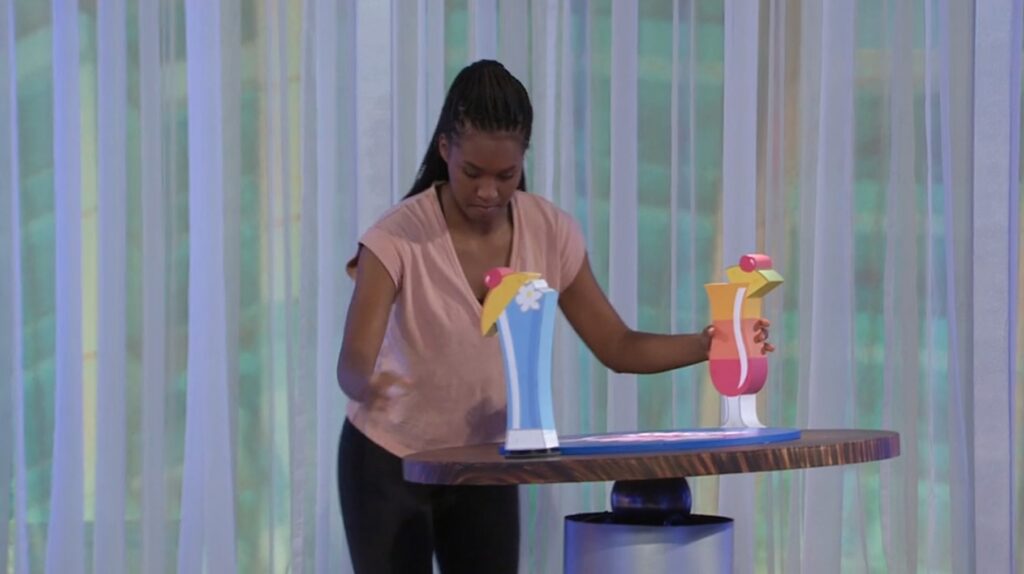 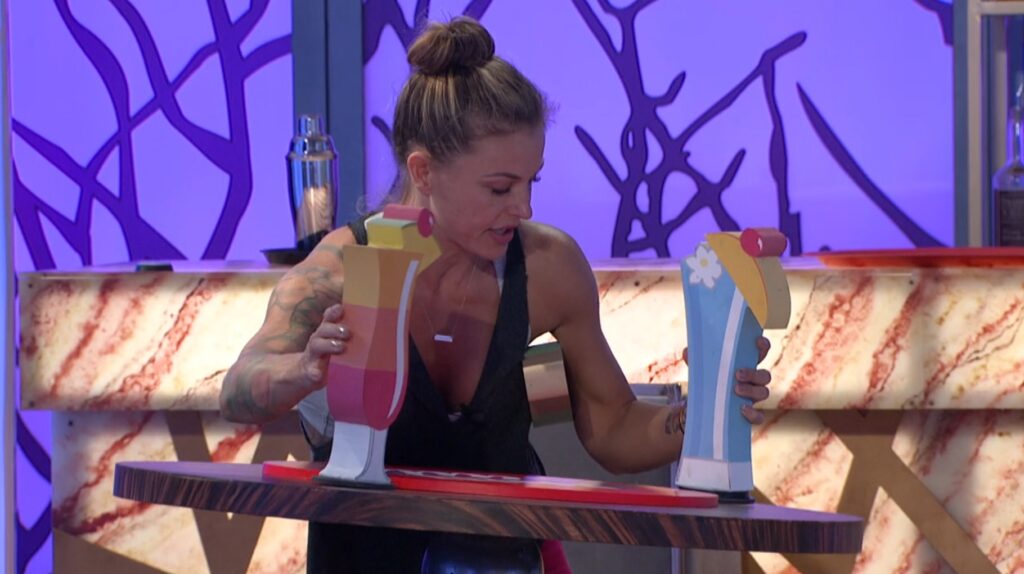 At the end of the day, Christmas wins with a time of around 1:38 and that beats everyone by at least a minute or so, so congratulations Christmas! 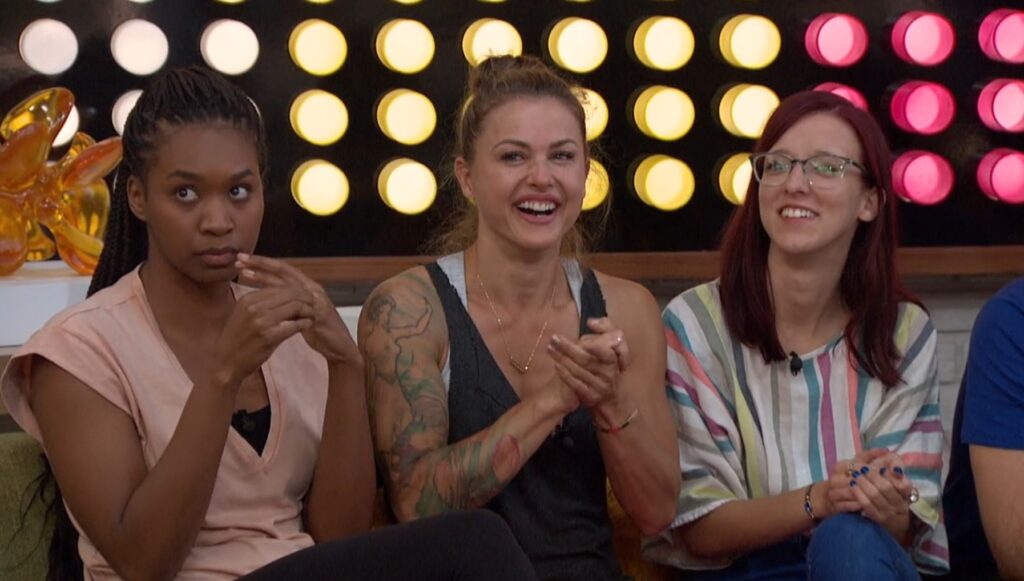 And congratulations to Ian too, as she holds up her end of the bargain and names him as her +1! 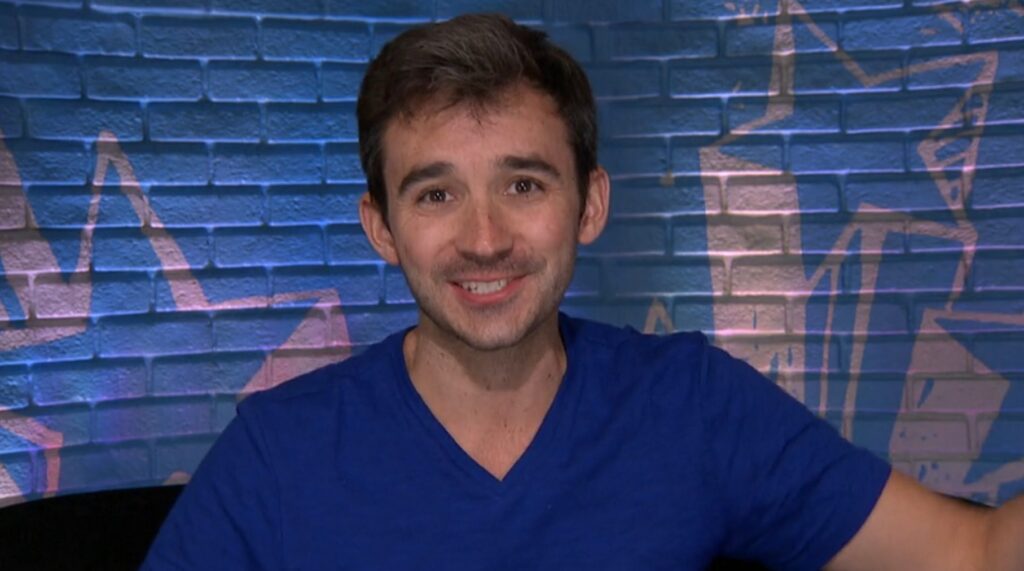 and this cutie is stoked that the conversation they had actually paid off!   Even better for Ian is the fact that this directly threw a wrench in Memphis’ plans as it seems he has revenge on the mind in order to pay Ian back for beating Dan Gheesling out for the Win in BB14.  It’s a lame thing to have as motivation, but I guess it’s what will make for “good” TV?   Like, who cares.  I do think Ian’s a good target, but he’s also a great meat shield and goat to bring to the end, just as long as you can prevent him and Nicole F from getting to the end together!   That task remains to be seen if it can be accomplished. 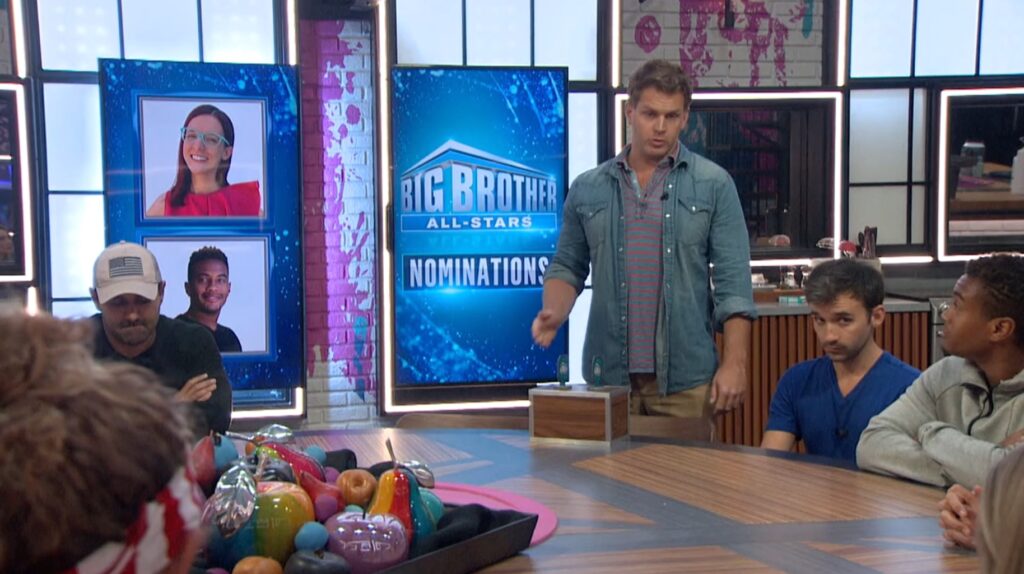 As you can see, Memphis wasn’t done with David, as he nominates him along with Nicole A.  It’s a bitchy reason given for Nicole’s nomination, as he bluntly says because she didn’t play Safety Suite that’s why she’s up.  Oooohhhkay.  And David gets the ‘welcome to the grown-ups’ speech and I still don’t know if I trust the nominations.   My gut tells me a backdoor plan is in motion but honestly it may not be?   The time since then in the feeds has shown that a lot of tears have been shed and well, I wouldn’t be surprised if truly one of the above goes home.  Looking forward to Veto on Wednesday though, that’s for sure! 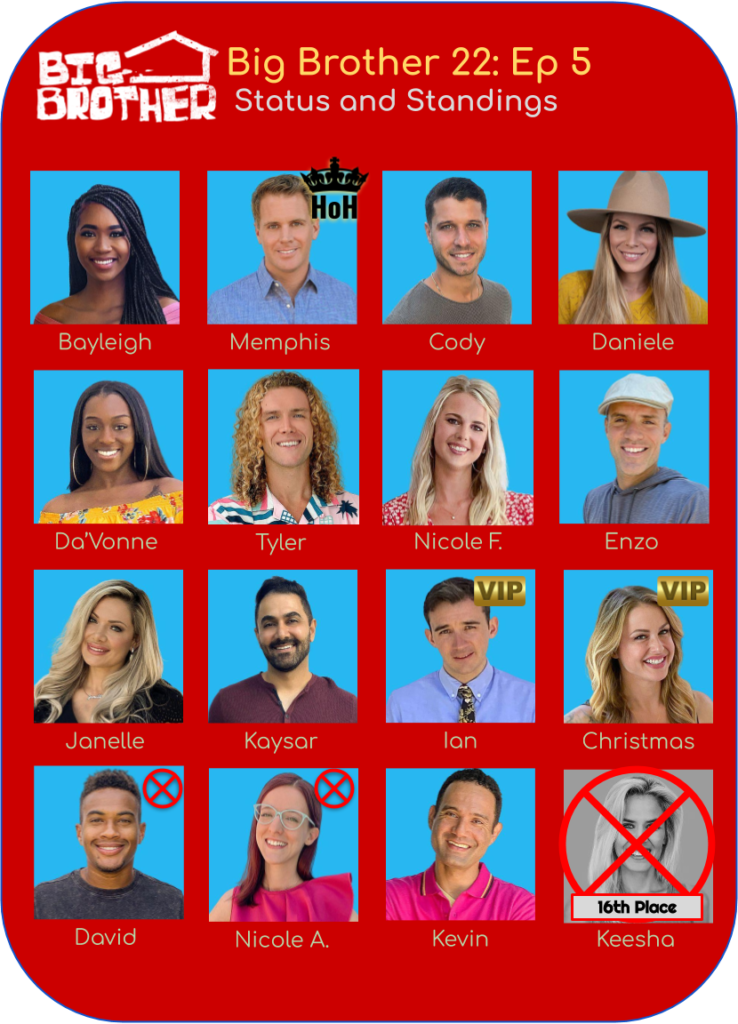 I sincerely hope Janelle and Kaysar can keep going and figure out a strategy to stay in this game for the long haul.   It’s an uphill battle and so far they don’t seem to be making any headway in forming new bigger alliances with anyone, but time will tell with these houseguests and usually all it takes is one power shift and existing alliances crumble.   Expect the Unexpected!