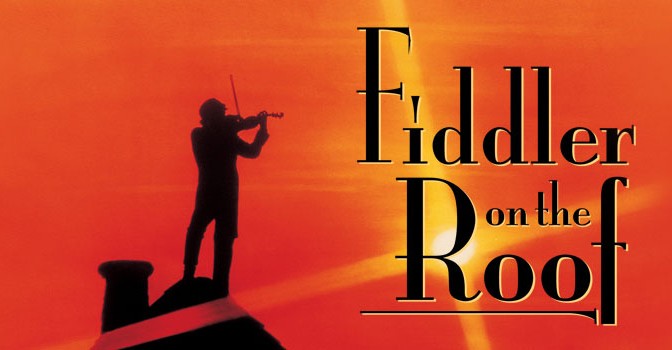 As a practicing non-Jew, I frequently find myself aware that I think I am pretty much as close to being Jewish myself as possible, without having been born into it.  If I were to say what my “type” is, I’d definitely have to say Jewish (or Italian), and if you see who I’m most attracted to, you would have to agree.  See Ari Melber (who looks very similar to Larry, just with more TV makeup applied).  Also?  See my best friends – I’ve been friends with Mila and Sveta for what feels like my entire life and I’ve been welcomed into their families (and likewise) during that whole time as well.  Favorite celebration song?  Hava Nagila by a mile.   But seriously, I realized I had been lacking in my Jewish education after finally watching Fiddler on the Roof while flying back to Los Angeles from Newark on my SIX AND A HALF HOUR flight. 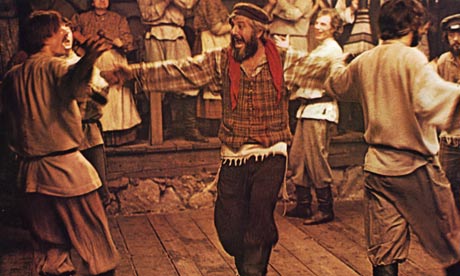 Fiddler on the Roof

Larry had provided me a warning that he didn’t think I’d like the movie, as in his words, “it’s a 3-hour long movie of dancing the horah”.  I couldn’t find anything wrong with that statement, and sidenote:  Larry HASN’T SEEN THE MOVIE!  I decided not to read the synopsis of the movie contained within the iTunes description either as I figured, let’s just see what this movie has to show.   Short version:  Wow.  Longer version:  It starts immediately with our eyes and ears into the village (and by extension, the world), Tevya, played by the one-named Topol.  You couldn’t ask for a more charismatic and welcoming character, especially when you’re thrust into what Tevya explains as the sole reason he and his village (clearly, a Jewish village) are able to survive:  Tradition!  At this point, I wasn’t sure if this was going to be a stern lesson on Judaism; fortunately, it is and it isn’t.  Tevya constantly talks with God (and incidentally, us the viewer) as he and his family are put through rapidly escalating challenges to keeping with the old traditions.  It’s a fantastic portrayal of the difficulties of being religious in a constantly changing and modernizing world. 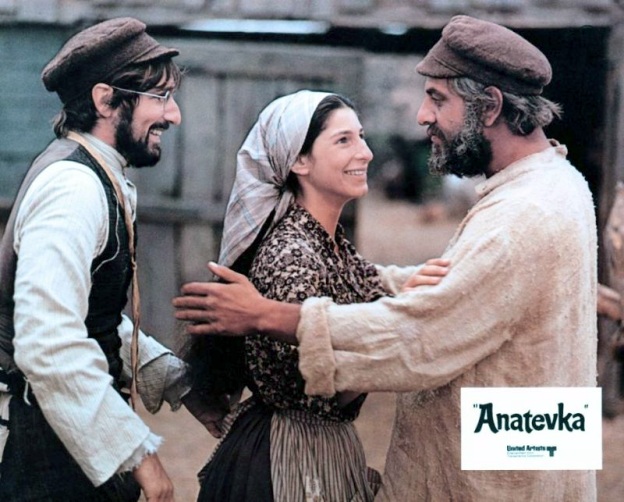 Those challenges would be likely enough for a movie, but the driving force propelling this movie into pop culture is of course the accompanying songs:  “If I Were a Rich Man”, “Matchmaker, Matchmaker”, “Sunrise, Sunset”, “To Life/L’Chaim” – these are all iconic songs and after watching the movie, I finally have an ever better understanding of their meaning and importance.  I think the most touching and tear-inducing (seriously, I was bawling at this moment) is the entire “Sunrise, Sunset” wedding scene, as it goes from such solemn tones to pure emotion and happiness to what unfortunately becomes anger and hopelessness.  Ugh, that whole wedding sequence puts you through the ringer.

By the end having experienced all 3 hours of the movie (meaning I still had 3.5 hours to kill on the longest westbound flight to Los Angeles ever thanks to strong headwinds), I was really kicking myself for not having seen it sooner.  It is a fantastic portrayal of Jewish traditional life as well as a sad reminder of what happened in the 20th century all around the world to the Jewish people.  That endpoint is the kicker and while there are some brief points of happiness (a LOT happens to Tevya’s family in the course of the movie), it really ends on kind of a bleak note. What I choose to believe is that Fiddler on the Roof is just the first half of a story that is concluded by The Jazz Singer with Neil Diamond.  I think Jess (played by Neil Diamond) is probably Tevya’s grandson, and the song “America” is the logical conclusion to Fiddler’s sad ending.  But what do I know?  I’m just a shiksa.  🙂

I highly recommend this movie!  And if you’re wondering, the title of the movie does not refer to any of the main characters; rather, at least as I see it, it’s a way to describe the Jewish faith itself and the complexity and challenge of keeping faith, as the only thing keeping the fiddler on the roof from falling is….tradition.

Okay, enough Film Studies 101 from this CS major.  I’ve been also working on scanning my film negatives and randomly today, I was able to find some pics from BCOT, Rosarito Spring Break, and some from New Year’s 1996 which I celebrated with Mila, Sveta and the gang (most of whom I just saw yesterday – yes, we’ve been friends for a LONG time)…here’s pics from that time and yes, we look like babies!

Me, Sveta and Mila

Sveta and Mila back at Sveta’s

Mila, Sveta and me

Me and Sveta in a 96 selfie