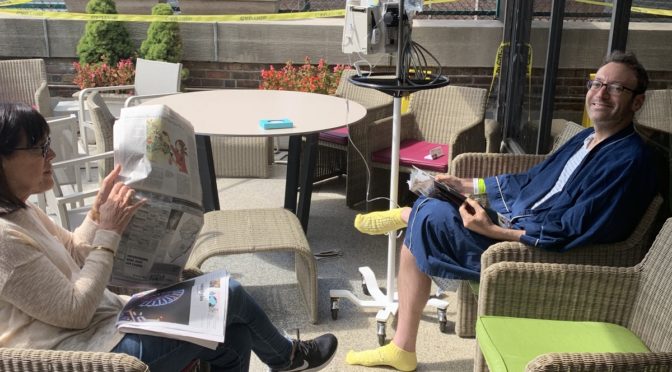 It was finally the day for Larry’s surgery.   All the prep appointments and evaluations had been made, and it was deemed that he could have the hepatic pump surgery.   What that meant was that they would open up his abdomen, making a big L-shape cut, and place a pump right below his ribs and to the left.   They’d find the artery that fed his liver and hijack that artery to pump the chemo into, so that it bypassed all the other organs.   He’d have to lose his gall bladder, as it would wither and die from this, but it isn’t needed.   The other issue that we had to prepare for was if they open him up and visually scan for signs of cancer outside of the liver.  If there was, they’d probably have to abandon the surgery.  So yeah, it was a lot of surgery, and there was going to be a lot of recovery, mostly at the hospital.   I had hoped for a week of recovery so the surgery was on Sept 3 and my flight home was Sept 10.

The day of that surgery was a long one – he had to be at MSK to check in by 4am, so we were up at an ungodly hour to get ready and then drive in.   Happily, there’s no traffic at that time.  We were the first patients and family to get there, and were there even before the staff that could check us in were there.  Eventually, the day kicked in, and Larry was brought into prep.  We could be there for that, and I’d be lying if I said I wasn’t scared out of my mind.  We had to hope there was no visual signs of cancer as we knew this was the next step – he had to have the hepatic pump or we were back to square one and a situation in which we had very few options as the oxalyplatin was not something he could keep doing, although effective.

We said goodbye to Larry and then had to wait for 3-4 hours for any word.   It was a long time to wait.  We did get the word that there was no visual sign of cancer, and that the surgery was able to continue.  It was good news.   We then got word that everything went as good as could be hoped during the surgery, but of course there was just going to be a lot of recovery.   Larry would be weak, he’d be in pain, and he would be tired.

All of those were true.   It was a long recovery, and it was not smooth.   He was able to start moving around fairly soon, but his GI tract wasn’t kicking in.  That apparently is one part of the body that can take the longest to resume after anesthesia, and in this case, it took a long time.  It finally did, unfortunately explosively and messily.   He also was gagging, and they ended up having to put a tube through his nose down his throat to help.   It was a lot.  He hated it.  Eventually his condition improved though, and that was able to be removed after a few days, which helped his mindset.   He had lots of physical therapy (and an attractive physical therapist at times, as seen in the pics below), and lots of naps and rest.  He had a lot of visitors, but unfortunately he did not have a private room.   There were multiple neighbors throughout his stay, the last one being suuuuuuper annoying.  It was actually the wife that was the worst, but what can you do.

During this time, Fran, Joel, and I would drive in and out of the city every day.  We should have gotten a hotel room.   That back and forth was exhausting.  We did get dinners a few times at some local restaurants, which was nice.    I snapped at Fran one night – it wasn’t my best moment, but I was exhausted, annoyed by the neighbors, and I just was tired of whatever she had been saying or how she was saying it.  I honestly don’t recall.   We ended up having dinner that night and getting through it.  It’s exhausting remembering it all now, as those were long days sitting in that small room and trying to hope and pray that what he went through was going to be worth it.   We had hoped it would buy Larry 3-5 more years, with the hopes that some new treatment would come down the line that would be perfect for him.  Maybe this chemo alone would be the thing that helped him.   We obviously didn’t know it wasn’t to be.   But Larry was a fighter until the end, and never gave up.  His spirit moves me to this day – his smile and fight is a goddamn miracle as I don’t know if I’d have it.  But we were there for him through it all.   I love you, Larry.

His recovery took a bit longer than I had planned for, and I left on Sept 10 – he didn’t get out until Sept 11.   I obviously felt bad, but he was in good hands and safe.  I’d be back at the end of the month.

Recovering – this was the next day after the surgery

At a French restaurant one night

It was a good one, and we wanted to take Larry there one day

The Garfinkels came up one day too

Ossobuco and risotto – it was good

We made it to the recreation floor once – it was nice

His home for over a week of recovery