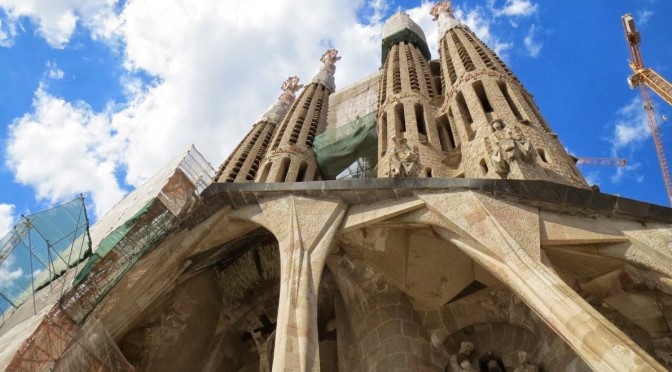 I knew this next part of the day would take up a lot of the remaining pictures so I figured, let’s just break up Day 1 into two, as I think the big money shot of the day is the Sagrada Familia, and who wants to have to deep-dive for it?

So as you may or may not have read about in the Day 1 – Part 1 post, we arrived in Barcelona after the end of the cruise and took a bus tour of the Eastern Half of the city as well as saw the Ramblas and settled into our swank lodgings at the Hotel Espana.  We had also booked a jump-the-line tour of the Sagrada Familia, the jewel of Barcelona’s artistic past and supreme tourist destination.  If you don’t do this kind of tour, you are going to wait in a long line.  Let me tell you, it’s completely worth the tour price to jump the line and get a bit of historical background on this insane construction.

So if you haven’t seen any specials on the Sagrada Familia such as the one 60 Minutes did in the spring of 2013, you may not be aware of the history of this structure.  I’ll link to the Wikipedia article on it so you can read as much as you want to about it, but briefly:

Antoni Gaudi is a Spanish artist / architect who had fanciful notions of what one could do with buildings and public spaces.  All over Barcelona, one can see his touch, whether it’s the Parc Guell (which we’d see the next day) and its fantastic and surreal landscape that is also a wonderful public park with the best views of the city, the Block of Discord where you can see his Casa Mila and Casa Batllo structures that just defy imagination, or the topic under discussion, the Sagrada Familia.  Barcelona was Gaudi’s playground and the city is all the better for it.

The crazy thing about the Sagrada Familia is that it isn’t finished.  Yet the construction started in 1882!  Gaudi had humongous ambitions when designing this ultimate Catholic cathedral and when finished (possibly in 2026 if current estimates hold), it will truly make a viewer gasp, whether it’s at the sheer size of the whole complex, the striking design and architecture, or the “gaudiness” of it.  When I was here with Jason and Wendy back in 2002, I don’t really remember the inside being as complete as it was during this visit, because the inside is as spectacular as the outside, with the beautiful tinted glass windows and the alien architecture.  It truly is a sight to behold.  I’d love to come back and see the completed structure in 2026, as that central and final tower with the bigger-than-life cross is going to be insane.  INSANE.

The Barcelona metro is clean and gorgeous

Read about this place – over 100 years and still not done

Gaudi was a madman

Up close and personal

When it’s complete, there will be a massive central tower

Everyone happy Jesus is here

Just insane the amount of decoration

This is the East-side facade

Some color to be found

In the museum dedicated to Gaudi’s workshop

Lots of models – this one is of the interior

A poster showing the construction progress and plans

This thing will be epic when done

That massive tower in the center…unbelievable

This is the Passion facade on the west

It’s immense inside and COLORFUL

That end over there is super rainbow-y

Happily there was lots of sunshine to make the windows sing

A view into the crypt where Gaudi is buried

Stairs up into the towers

Sagrada Familia through the trees

Oh, and here’s a video I took while inside:

After marveling at the Sagrada Familia, we made our way back to the top of the Ramblas where the Bus Tour line originates their tours.  We were now going to do the West Loop tour!  This tour explores a bit of the area that I remember spending time in back in 2002, including the area of Montjuic, the Olympic stadium, the Royal Palace and the Magic Fountains (!!!), and then the Soccer/Football stadiums.  After that, it was a leisurely ride back through one of the main shopping streets and then back to where we started.   It had started to get colder though by this point and the wind from the ride was a little chilling.  It was very nice to be done with the tour, that’s for sure.

On the second bus tour

The tour starts off the same, but then veers west

Heading to the World Trade Center

Equinox is gone – no sneaking aboard this time

A view of Barcelona from the Montjuic area

The 1992 Olympic stadium and torch

The National Palace and MAGIC FOUNTAINS

Knockoffs of the Venice Campanile

I used this train station back in 2002

FC Barcelona is the team, if you care

After that, we were done with doing touristic stuff and basically exhausted.  At this point, our adventurousness with regards to finding dinner was also severely reduced as we just wanted to find some good tapas.  We asked the hotel concierge to recommend a good place near the hotel, so of course he did chime in that the hotel restaurant was extremely good (which I believe it is, but we never found out), but we wanted something in the neighborhood.  He referred us to a place with some vague directions, and after getting kinda lost and bits of patience being chipped away at, we did find the recommended spot.  Unfortunately for us, it wasn’t the friendliest of joints and kinda trendy, while also a bit frustrating as there wasn’t the option to see an English menu.  I KNOW, stop being so American.  But c’mon….the restaurant was maybe 2 blocks from the Ramblas, the PRIME tourism heart of Barcelona.   Really, you’re not going to have even an option for an English menu?  So we were at the mercy of the waiters who did try and help, but the selections we made probably weren’t what we would have chosen if we could have understood the whole menu.  Not our finest moment.  But lesson learned.    After dinner, it was definitely time to sleep, which we happily did.