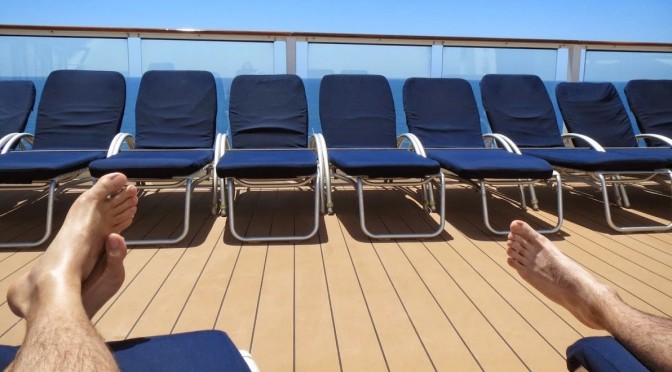 I’m grouping these last two days together as they were kind of a long big blur of a time – a good time, but it was really just the ship heading back from Kotor all the way to Barcelona, so occasionally you’d see some neat stuff from the ship, but mostly it was ways to combat boredom.  That usually involved drinking.  🙂

So now it’s Day 12 – Day at Sea II, and it’s been very relaxing. Had a late start, got some breakfast, then went up top for a few hours on the Solstice Deck for some sun as Dave had said that’s where he’d be and it was rarely crowded. He was there, and for a while it wasn’t crowded, but it certainly did get that way. Had a few drinks and a burger for a snack then finally it’s now where I realized I need to type up the last few days before it gets too long to remember everything. We have reservations at Murano tonight and I am excited as to what we will have. Hopefully we’ll hang out with Dave some more and just have another great day tomorrow before docking in Barcelona the following.

This was also the evening when we got to see “Equinox: The Show” – in which we got to view what the entire showroom and stage was built for, as it is pretty ornate and you don’t know why until this show.  Think Cirque du Soleil but obviously not THAT insane.  But still, lots of cool little artistic acts, whether it’s dancing and singing or crazy feats of strength and acrobatics.  Pretty neat to be honest.

Ruh roh, I’m now at the point where I stopped writing in my journal!  Well, time to fire up the ol’ memory banks and bug Larry to see if he remembered what we did that day!   I can report that the night before’s dinner at Murano was fabulous, and this time there was no mortifying comments likely overheard by their subjects nor a food reaction.  It was just wonderful.

The next day though was a bit of a comedown from the highs of yesterday, as instead of the wonderful sun, it was kind of dreary.  Glad we did a pool day yesterday!  We ended up just kind of wandering the boat for the first part, getting some coffee, looking at lifeboats…yeah, it was pretty slow.  I think we did also manage to get some more gambling in (that would be me – I think I spent a LOT of time at the blackjack table) before we had a last dinner with Dave and then it was time to pack and get ready for the next chapter of the trip the next day: Barcelona!!!!

The central foyer on Equinox

Our Day-at-Sea view from our room

One afternoon was lay-out-at-the-pool time

We had it to ourselves (and Dave) for a long time

Mt. Etna in the distance

Day 2 was just a lot of time killing

Our room is right up there at the top

Nautical map view of our journey