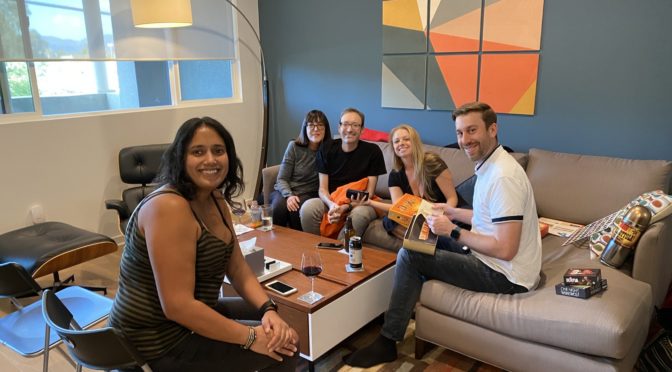 So this party came together for a few reasons.   One was that four of us had birthdays in the vague neighborhood of Nov 2.   My birthday was obviously the next day, Carey and Nicki’s was earlier in October, and Sveta’s was at the beginning of October.   Another reason was that we’d wanted to have a game day / night of some sort for a while at our house with friends, so why not use this as a good reason?   Another reason on top of that was that we by now knew that there was likely bad news coming our way regarding Larry’s condition, as two weeks before at City of Hope for his latest infusion we were getting bad news.  The worst news was to come the next week (Note:  I’m writing this from March 2020 as I am going backwards to include memories from 2019) when it was all but certain we were out of options.  So this was kind of the last weekend where we had some hope – it was very little hope, but Larry was a fucking champ and kept fighting and remained in the zone to beat cancer.  I love and loved him so much for being so brave.

Because of all this stress, Fran came in to be with us.  We picked her up in the morning, before people came over in the early afternoon.   It was a truly wonderful time, and like I said, really the last time we treated the situation not as a “last”.  After the following week, everything was more tinged with the hard reality of what Larry was facing.  The gang came over and we played a couple of games that Nicki had brought, including Dixit, a game much like a Cards Against Humanity but using art as the answer; also Secret Hitler, which while fun really does have the worst name imaginable.  We grilled and had some burgers and hot dogs (thanks to Chris, Nicki’s date for the weekend, the food was spectacular), and we also had cake.  It was a wonderful day and night, and one of those events that I want captured on this here site as I don’t want to forget or let slide the good things that did manage to happen this year.

Our roofdeck is ready for guests

Look at that sky

Larry & I picked up Fran from LAX that morning

Getting the games going

With Rekha, Nicki, and Chris

Carey and Paras joined too

Mila got there too!

Chris was a master griller

All the birthday celebrants