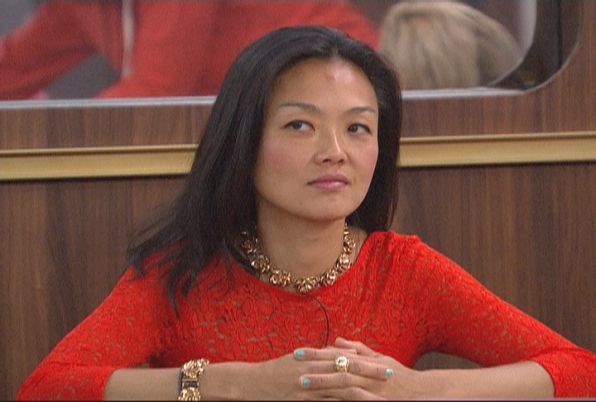 Oh Helen. Â As my once-favorite houseguest (Amanda) said to the viewers in this last episode, “don’t be sad about Elissa, Helen. Â She’s not the target…YOU are!” Â How do you not see this all happening around you, Helen? Â HOW? Â When I’ve thought about your gameplay, it’s clear that while you are definitely a worthy adversary, the Three Nominees twist from the first half of the show SAVED your ass. Â Without it, there’s pretty much no way either you or Elissa would have made it this far. Â In fact, we’d probably be in the midst of a truly nasty and frattybro Moving Company domination. Â But that third nominee by the “MVP” proved vital to keeping you in the game Â and laying the groundwork for there being a female majority in the house. Â Huzzah to that, but it probably wouldn’t have happened without that twist.

Recap of the Elimination from last Thursday:

Jessie went home. Â She tried to “blow up” the house. Â No blowing occurred. Â Aaryn won HoH for the FOURTH FUCKING TIME. Â Amanda was terrible yet again at the competition. Â You are caught up. Â I’m sure I could have written more, but my time was a tad occupied this weekend. Â Jessie was a non-entity in this game, almost pathetically so.

So we may/will get treated to one of the juried houseguests, including whoever gets sent home this Thursday, returning into the house. Â I am not positive Julie said it was as a contestant, so this could be a big misdirection, but it sounds a lot like the “Outcasts” twist from Survivor: Pearl Islands, from wayyyyy back in the day. Â Terrible idea then, terrible idea now. Â  I really wouldn’t mind if Judd came back, as he was growing on me and he is adorable, but still, no. Â Candice, Judd and Jessie were all eliminated fairly. Â Helen will likely be eliminated fairly too. Â Just no.

What about this last episode?

Frankly, I feel it would just be easier to link to this article from the site formerly known as After Elton, as it is hilarious and the author is basically reading my mind:

Louis Virtel, the author, had these major points to make, and I can’t really argue with any of them or add anything as it’s freakin’ hilariously accurate:

Absolutely perfect. Â And that picture he used for his article is absolute bliss. Â Click away on the link as he definitely gets into it. Â And makes me wish I had gone full-on snark in my write-ups. Â I also want to start capturing my own screenshots…but that’s a lot of work.

In a flashback to our first week in the house, Helen and Elissa are back up on the block. Â Unlike then though, there’s no hope of an MVP twist to save one of them. Â There really aren’t any allies for them to lean on for help, as everyone is pretty much ready to see one of them gone. Â I honestly believe Helen, when evicted on Thursday, will be blindsided. Â It’s disappointing for sure, but when she fell for the fake alliance move, it was kind of inevitable. Â Then her cryfest about Elissa wanting to quit and not go to jury…to all those people in Aaryn’s HoH room? Â HOOO Boy. Â  Talk about not knowing your audience. Â Even though Andy & GinaMarie were all “no, no, stay, tell us what you’re feeling,” didn’t she realize it was ANDY and GINAMARIE saying that and no one else?

So Helen, I’ve admired your game for pretty much all of this season, but you got played. Â You also ran out of floater allies to help buffer you from having to play real dirty, and you turned on the ones (Candice, Jessie) that could have really helped. Â You underestimate Aaryn’s capability to play for herself (and while I think Aaryn should realize that she’s a onesie (as well as Andy) in that final 4 alliance that contains the power-duo of Amanda & McCrae – and somehow figure out how to also forge a strong duo, and note, GinaMarie is NOT a part of a strong duo). Â You hitched your wagon to the Reilly sister who really had no business being in this game. Â It was going well for a very long time, but it’s kinda over.

Could Helen win Veto tonight? Â Sure. Â I wouldn’t count on it though. Â Besides her HoH win sooooo long ago, she’s been pretty pathetic in competitions too.