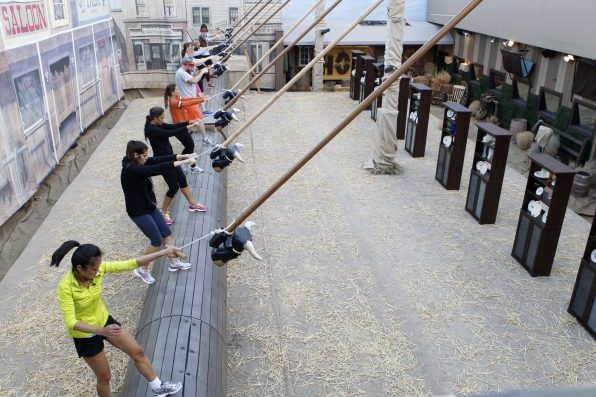 Oh yes, we are back in business. Â CBS and Time Warner? Â Not so much, but after about 5 seconds of deliberation, it was like, okay, let’s pay the $1.99 for Sunday’s episode. Â We also decided to buy an HD over-the-air antenna so we don’t have to play these games anymore. Â We’ll have to figure out the best way to use it, but at least we’ll be able to see the show, even if we have to watch it….shudder….live. Â This experience has really lent us some perspective on cutting the cable cord too…. Â (Update: we received the HD antenna and it works great – plus we get all the subchannels and endless amounts of local foreign channels. Â Fascinating.)

So what crazy train am I talking about? Â THERE ARE SO MANY TO PICK FROM. Â First, we have good ol’ GinaMarie. Â GinaMarie, who won HoH this week, after lasting longer than everyone else on the log-rolling comp. Â She didn’t even have to rely on any deals, but more on that a little later. Â GinaMarie, who completely flips out in her new HoH room when she sees a picture of her and Nick together. Â OMG, woman. Â You are in your 30s. Â Act like it. Â While I can’t stand Aaryn at all, she really has been the best and bitchiest in terms of Diary Room comments, and nailed it when she saw GinaMarie lose it, telling us, “I had just gotten her off the Nick ledge and now she’s right back on the crazy train.” 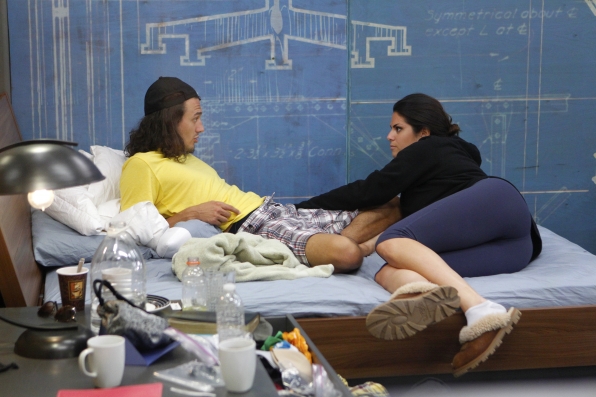 Then we have my girl Amanda, who if she doesn’t start playing her cards a bit better, may lose her status as one of Hobie’s Girls. She is letting the power and position she holds go to her head just a bit. Â Amanda’s little feud with Jessie (SIDE NOTE: don’t you love that these previous outsiders are finally starting to show up in the show? Â Jessie with her Amanda feud, Andy and his snitching…and Elissa is now relegated to the background which is shocking but not too surprising either) was a bit melodramatic. Â In all fairness to Jessie, she wasn’t wrong about Amanda’s behavior and the way she’s perceived. Â Unfortunately for Jessie, she was a big player in the potential oust of Amanda and got sold out, by Andy. Â So being caught red-handed, she tried to pretend it didn’t happen and then complain about Aaryn’s fakeness (it was Aaryn she was complaining about, right?) which totally set Amanda off.

I was a bit put off by this argument as it took up two segments and I hated seeing Amanda start to sabotage her game. Â McCrae is trying his best to calm her down but she certainly doesn’t want to hear it, even mind-bogglingly saying that he never supports her. Â Wow, that’s a bit COMPLETELY WRONG. Â So, come on Amanda, get a grip. Â Get your head back in the game. Â You and McCrae have a shot at going the distance, but right now, I think only McCrae has a chance at going the distance. Â As Jessie correctly points out, YOU are a target.

Speaking of McCrae, I think he should have taken the deal that GinaMarie offered when they were the last two standing during the HoH challenge. Â Sure, GinaMarie is a wildcard at this point, but she was pledging to not put either you or Amanda up. Â Now, if she decides to backdoor either one of you, it’s not a big deal because there was no deal. Â We’ll see what happens this week with MVP, but if Amanda’s up again, and GinaMarie is tempted to put you up too….well, don’t say you weren’t warned.

As for nominations, GinaMarie didn’t really nominate anyone surprising. Â What was completely nonsensical was when she explained why at the nomination ceremony. Â What in the holy hell was that? Â Candice is or is not a rat, a drama queen, ….etc? Â  No one knew what the hell she was blathering on about and in one of the first times I’ve seen it, people were openly laughing at the ceremony. Â I’m not sure if it was edited and perhaps there was something else they were laughing at, but it certainly seemed Judd, Elissa and Spencer were dying at GinaMarie’s ramblings. Â Jessie was also nominated and instead of saying something trite and polite, GinaMarie went off on Jessie too. Â No idea what is going on there.

I know that Aaryn just flat-out hates Candice (did you catch her eye-roll and disgust when Candice picked the box with $5000 as one of the first three to fall off the challenge?) but I don’t know why Candice gets Â stuck with a drama queen reputation. Â As I stipulate quite often, what happens in the house rarely gets reflected accurately in the show edit, but you’d think there would be something to show. Â Candice and GinaMarie definitely had a blow up during that whole bed-flipping incident, plus Candice had her Spencer-attack house meeting, but those aren’t really drama rather than game play. Â But if that’s what counts as drama nowadays… 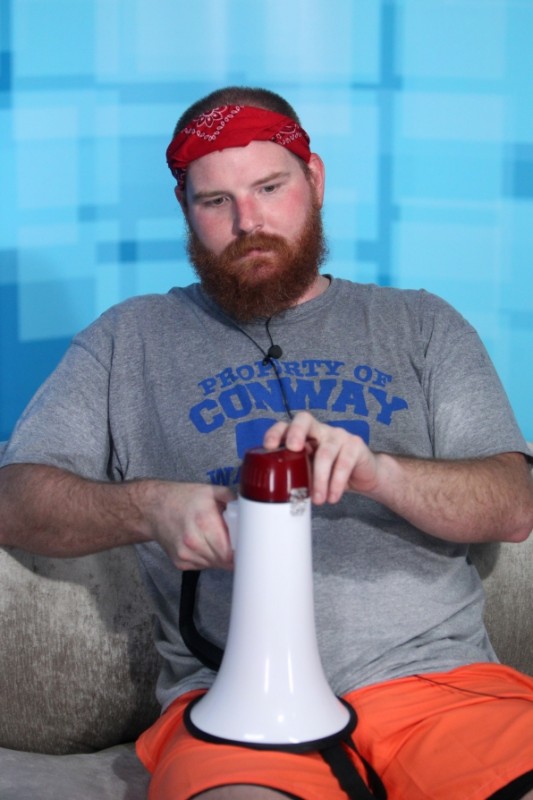 I love that Spencer had to say everything through a bullhorn, having picked the bad box in the HoH Challenge.

I am intrigued as to what, if anything, happens due to Helen’s BBQ with 3 of her closest friends. Â  With Elissa and Aaryn as known guests, will her 4th guest be an actual controversy? Â Or was what we saw with the awkwardness between Jessie and Aaryn all we get? Â Guess we’ll find out soon.