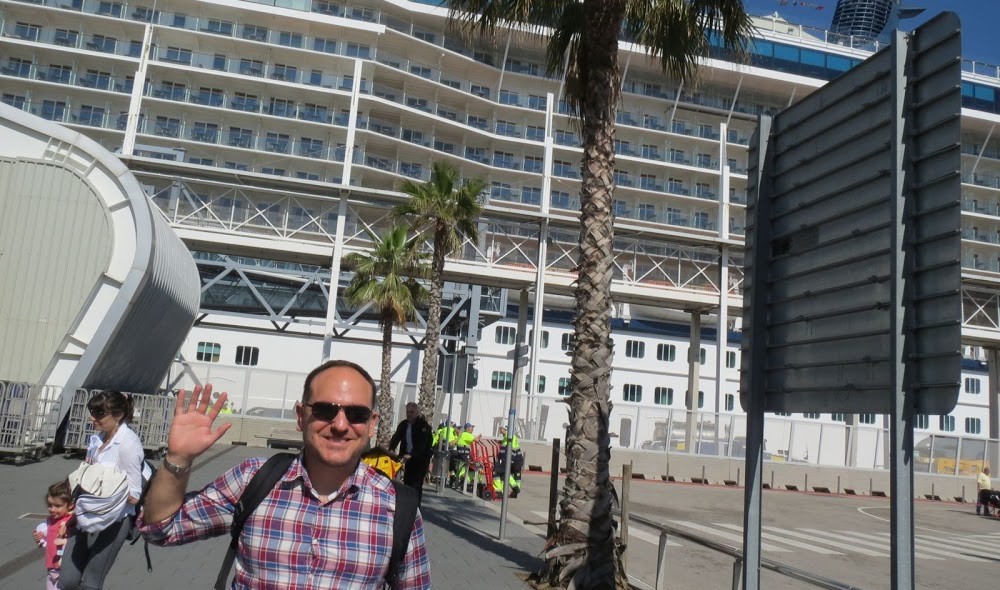 Sure, it’s been over a month and there’s been no inkling of photos about my trip.  Yeah, so?  Alright, so the overwhelming amount of photos definitely spooked me and I’ve been dragging my feet on this exercise accordingly.  So it’s time to get this out – luckily I was pretty good about documenting the festivities as they occurred, but I kind of stumbled at the finish line with the Barcelona portion, so you’ll have to cut me some slack when we one day get to that part of the trip.  Remember it took me over a year to finish the 2011 pics!  Yes, I suck.

Let’s set the stage for this trip, shall we?  Larry & I wanted to go on another a Celebrity Cruise as it’s quite a classy affair without being too snobby.  Also, a bare minimum of screaming kids, which I am always thankful for.  Our last Celebrity jaunt in 2011 covered the Eastern Mediterranean from Italy to Istanbul, and it was fantastic.  We chose the Western Mediterranean itinerary this time, and I think we can say we’ve gotten the Mediterranean out of our system, at least from a cruising perspective.  We’re both all-in when it comes to spending more time in Italy in the future though.

Alright, without much further ado, here is the rundown on the day of traveling and the arrival at Barcelona where the Celebrity Equinox was set to depart.

Well, we’re on our way to the second Celebrity cruise in the Mediterranean!

Starting off yesterday, we spent quite a bit of the afternoon and evening getting packed. We bought these giant new suitcases because we were going to be smart and not bring two heavy bags, just one. We’re so smart. Well, we try to be, at least. Of course a big suitcase means you end up filling it up. The weather forecast for this trip is indicating that temps will be in the high 60s/low 70s, with possible rain, so we can’t dress mainly in shorts like last time, when it was ungodly hot.

So we filled that suitcase right up with all our stuff, having to pack for about 14 days of adventure. Last night was also spent making sure we had something to watch. Rented some movies from iTunes and discovered that our wireless network SUCKS for download speeds. Also, don’t rent the HD version of a movie if you’re planning to just watch it on an iPad. Successfully downloaded The Hobbit, Cloud Atlas, and the 2-hour finale of the recent season of the Amazing Race, since we ended up missing that during our move as we just didn’t have enough time or energy to watch it.

Anyway, living in Silver Lake now instead of Santa Monica means that you have to travel a bit further to get to LAX. We ended up hiring a black car service in order to ensure that there was plenty of room for our big ass bags. Maybe that’s one thing I miss about living out there in Santa Monica, but regardless, we got to LAX with plenty of time. While checking in at the self-service kiosk, I think both of us realized lack of sleep means we can’t read signs, as when it asks you to scan your passport, we both missed the massive sticker at the top of the machine that said, Scan Passport here. Instead, we happily kept trying to scan it in the Scan Barcode here. I blame sleepiness. Oh, and of course our bags were over 50 pounds each. So much for being able to fly cheaper and not pay extra bag fees. So there was $60 each out of the travel fund.

And now we’re on our first flight, this one being from LAX to Miami. Larry remarked he hadn’t been to Florida in a long time. Glad he realized this really didn’t count as going to Florida. I’ll check in again, probably next time from our flight to Barcelona!

Ready to begin the journey

On our flight to Miami

Thankful for enough time to have a Cuban dinner

The restaurant was delightfully modern

I can just say that after today’s experience, I think heading to a destination city for a few days before the cruise is the better way to do this, as we are some jet-lagged motherfuckers.

As can be seen, I didn’t type anymore on the next flight to Barcelona after all. So here’s what you missed! Once in Miami, we had a great dinner at a place called Ku-Va, a Cuban restaurant in an airport. It didn’t suck, surprisingly. In fact, it was fantastic. We had plenty of time for the layover, but didn’t realize that the flight boarded an hour out. Anyway, after eating it was time to go on our 9 hour flight. We got a bit of a nicer seat than just regular coach as there was more legroom in our middle section, between business class and economy. Yay us. We sat in the middle seats and ended up next to another gay guy, an older guy named Gary. He was a great seatmate and helped make the flight a nice one. It was a long flight regardless, and I think I managed to nod off here and there.

In the end, we arrived at Barcelona’s beautiful airport on time and it was sunny! The forecast had been along the lines of rain, so it was a relief that we didn’t have any after all. Ended up taking the Celebrity bus to the ship as it made a lot more convenient to do that rather than get a cab and perhaps end up somewhere nutso.

It was wonderful to see the ship dramatically presented to us as the road to the cruise port almost felt like, per Larry, surveying the Enterprise from a shuttle craft. It was pretty sweet. I think we ended up being one of the first people to get on the boat, as it was about 11am after going through the check-in procedure. That made for very short lines, which was nice. Upon boarding Equinox, we realized it was right on the deck where the Martini Bar was. We couldn’t go to the rooms just yet, so hey, time to put our Premium Drinks package to use. Or to the test, as we both plowed through 3 martinis each, which were fantastic. Of course, getting wasted while exhausted is a GREAT plan. When we finally got to our room, there was champagne waiting for us, so drinking that on top of already being a bit drunk led to us eventually passing out.

What woke us up first was the mandatory lifeboat drill – that was a hard time to wake up for. After that, we walked around the ship a bit up on top and marveled at the beauty of Barcelona. We stayed up there to watch as the ship left the port at 5pm, and then finally went back down to our room, making a reservation for dinner at Silk Harvest at 8:30pm, so yay, more sleep.

Now we’ve had some good dinner, nothing more to drink for now (I think we definitely got our $54 worth of drinks today) except water and Diet Coke, and now it’s time to see if our bodies will cooperate and go to sleep. Tomorrow is the port of Villefranche, which is basically the French Riviera and includes places like Nice, Eze, and Monte Carlo/Monaco! The forecast is again for rain in the morning. Here’s hoping that isn’t the case after all.

Larry at the Barcelona Airport

Ready for a full day

On the Celebrity shuttle to the dock

The bluish tint of the windows

Scenery as we drove to the city

The dock is right in the city

Finally there and out of the bus

Next The Equinox is a big ship

Barcelona’s terminal is nicer than Rome’s

After security, the walk to the ship

The entrance dropped us off at our fave place

The drinking began in earnest

Our room had a great view

Some took helicopters there

We eventually did drink it

Exhaustion and drinking are a great pair

The music selection hasn’t changed since 2011

The next 12 days were fantastic

Our quite comfortable room

Looking towards the city

It was a beautiful day – too bad tomorrow wasn’t

We experienced departure here in our delirious state

Saying hello to other massive ships

Just barely holding on to awakeness

We ate here the first night last time too