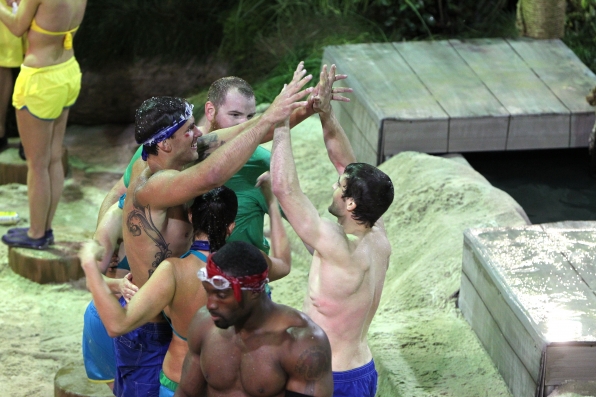 Well well well, this season is truckin’ right along, isn’t it?  We’ve already got some alliances, divisions, and showmances, and we’re only at Episode 2!   LOVE IT.

So our newly minted HoH, McCrae, is doing pretty damn good for himself at this point, isn’t he?  In my mind, he was a certain early pickoff due to his awkwardness, yet I think he obviously parallels last season’s victor, Ian.  Remember Ian was quite the oddball through much of the season, but at the beginning, he was far and away the oddest one there.  He even streaked the house.  So yeah, I was pretty sure Ian was a goner and I was clearly wrong.

Look at McCrae though – he’s not only safe this week, but he’s now in what could be a very strong alliance, The Moving Company.  It’s an all-male coalition who have no qualms about targeting anyone, although it does seem girls are the initial enemy….and Dave.  But it’s a pretty good alliance with its members including Howard, Jeremy, Nick, Spencer and McCrae:

It’ll be interesting if this actually manages to last though.  The last successful alliance formed at the beginning of a season was the BRAHgade.  There were a lot smarter of individuals though in that group and I don’t have that much confidence in Jeremy and Howard.  Clearly Jeremy is douchetastic but Howard’s amusing performance at the Have/Have-Not challenge doesn’t bode well.  He’ll always be considered a threat though so Howard definitely needs this alliance to succeed. And I’ve got to hand it to Jeremy that it’s in his best interests to charm the ladies as he’s right, the MVP will more than likely get awarded to a girl the first time.  But I don’t see it lasting past the first week.

I am officially throwing my support and love towards these two women, as I want to go drink and party with them.  First we have Kaitlin, who was killing me during her conversation with Jessie (ugh) and GinaMarie, when she was first aghast that Jessie was thinking she was interested in any of these guys.  Loved when she was hoping that she could help Jeremy blow his nose as his voice was driving her crazy.  Frankly, Nick’s Michael J. Fox impression (thanks to Larry for identifying that) is what is driving me nuts.  And Amanda….oh Amanda, love you too.  First in her confessional, she says what I was thinking and that she just wants to slap Jessie.  THEN she goes to McCrae both in his HoH room and advocates for Jessie’s nomination, but also at that vent session.  I think Amanda is a great player but I see the potential of her trashtalk backfiring on her.  What’s great is that Amanda and Kaitlin seem to be friends thus far – I hope an alliance is in the future.

I can not stand her.  I loved the little tag right before the theme song kicked in where CBS always throws in something funny, this time when Jeremy was reinforcing Jessie’s belief that of course the girls are targeting her because they’re jealous and she just knowingly nods and gestures at herself in that “yeah, I know” way.  Is it any surprise she shares a name with one of the other most annoying players in recent BB history?  NO IT IS NOT.

There’s plenty of other events that happened this episode which involved a few of these folks.  Obviously we saw Howard’s sad sad attempts at moving the raft in the Have-Not competition, but we also got a lot more of the potential explosion of drama with Elissa, Rachel’s sister.  As Larry & I were discussing amongst ourselves, it is ludicrous of Elissa to think she could actually fool or avoid the issue of her sister by just ignoring it.  I wouldn’t get as upset as Arryn (or Aryan, as Larry likes to call her, as he insists anyone who spells their name like that is clearly going for something subliminal… ;-))  is over Elissa’s “betrayal”, but Elissa played this completely wrong.  She should totally have OWNED being related to Rachel and made it a light-hearted joke when they were doing their introductions.  People are not blind or deaf and you’re literally a carbon copy of Rachel.  Maybe Elissa has a touch more more plastic surgery though…or maybe botox.  Yowza.  Helen and Andy weren’t really elements of the episode much which makes me sad, as I am prepared to root for both, as Helen seems like a bad ass and Andy is the token gay this season.

As for Judd, I guess I’m a little surprised he wasn’t even mentioned as a potential member of The Moving Company alliance.  There’s more to this story I think, but we’ll see.  It’s clearly not as cut and dry as the Dave situation.  But more on that in a later episode as that showmance of Dave and Aryan’s is something to talk about later if anything comes of it.  Because we’ve got only one more thing to deal with, and that’s…

The Nominations:  Candice and Jessie

I can’t say I’m disappointed by these nominations.   It would have been interesting if they’d gone after Dave this early, but I’m thrilled that Jessie’s on the chopping block.  Candice, I don’t know all that much about, but it was made clear that the others in the house aren’t her biggest fan, especially after her performance at the Have-Not competition.

I think I’m most interested in the first instance of MVP involvement though.  I’m not sure I am totally in agreement with Jeremy’s assertion that America will give this first week’s MVP to a woman (I realized that Julie Chen did say that MVP gets re-picked every week, so the power will rotate around).  And whoever is actually chosen as MVP drastically changes on who will get that third nomination.  If it’s a “friend” of Jessie’s, they may strike out at a guy.  If it’s one of The Moving Company, they may toss Elissa right up there.  Frankly, I’m not sure of anything about that third nomination, but dammit, CBS has done a fine job of getting me interested in this show and quite quickly.   This cast is pretty good and the action is definitely in full swing!

Coming Up on the Next Episode:  MVP Reveal and Third Nomination; Power of Veto Competition.