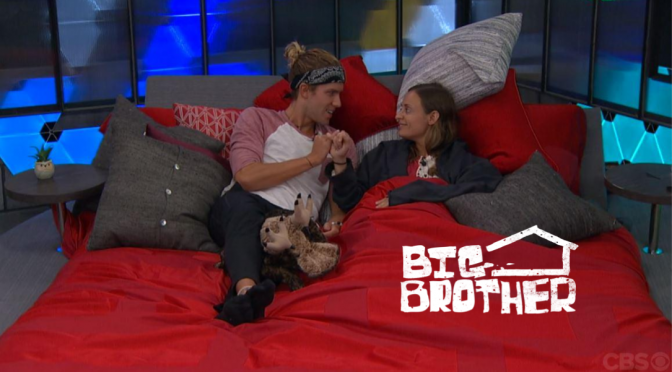 You know, this season has been very fun so far.   Plenty of attractive men and then there’s been the pretty entertaining challenges.   But I must admit that there has been some gameplay from some people that has surprised the hell out of me, hence the title of this post…

Kaitlyn Is Doing It Her Way 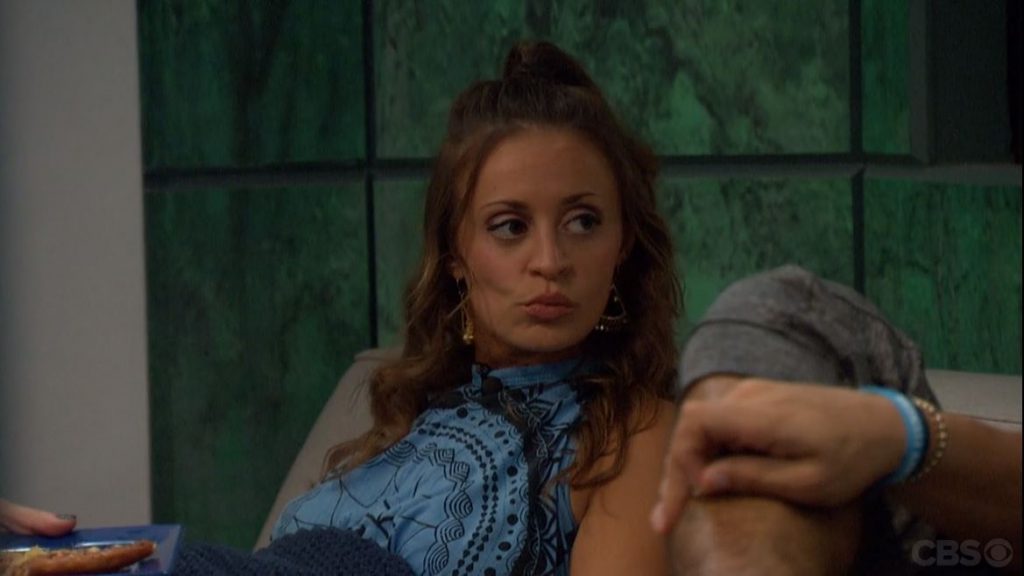 Her hippie-dippie stuff was so clearly not all there was to her, although it was worrying that it might have been.  She’s still kind of spacey, but I’m oddly finding it endearing?   After her move to vote out Steve, she likely would have been an easy target if anybody else had won HoH.   But here we are, with Kaitlyn as the HoH.   Perfect timing.  And now she’s in power and getting to learn even more about her fellow houseguests, and she’s winging it all the way, but she also seems to have a good sense of what will work for her. 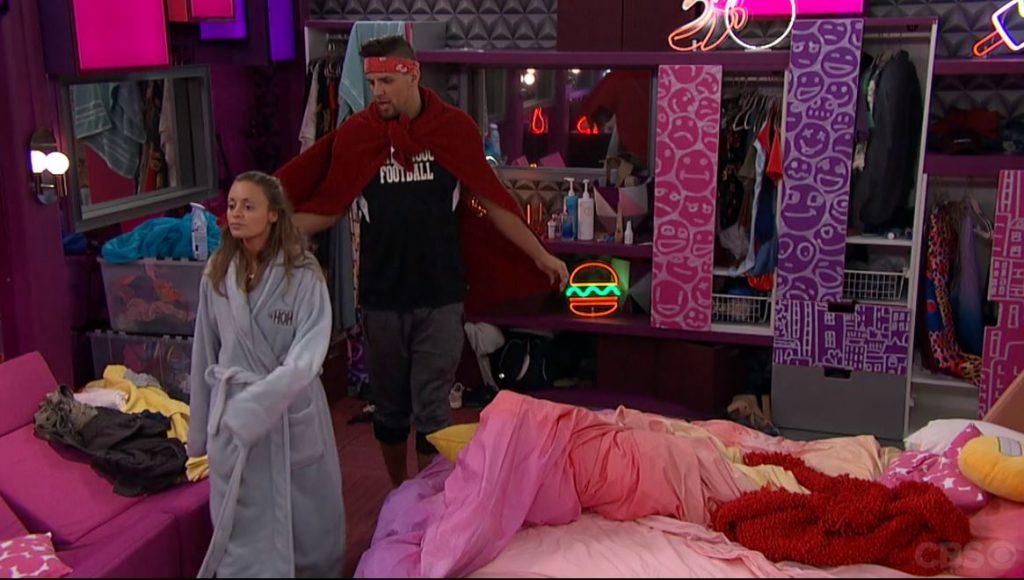 Plus, she’s got Hottie Faysal sucking up to her to make nominations go the way FOUTTE would like, and you know that brings her joy.   I don’t know, Kaitlyn certainly does bother at times, but right now, I’m loving it.   I think my fondness is being helped by the fact that she’s working with the other name in my headline…

Tyler, the Guy Who is Seriously Playing This Game 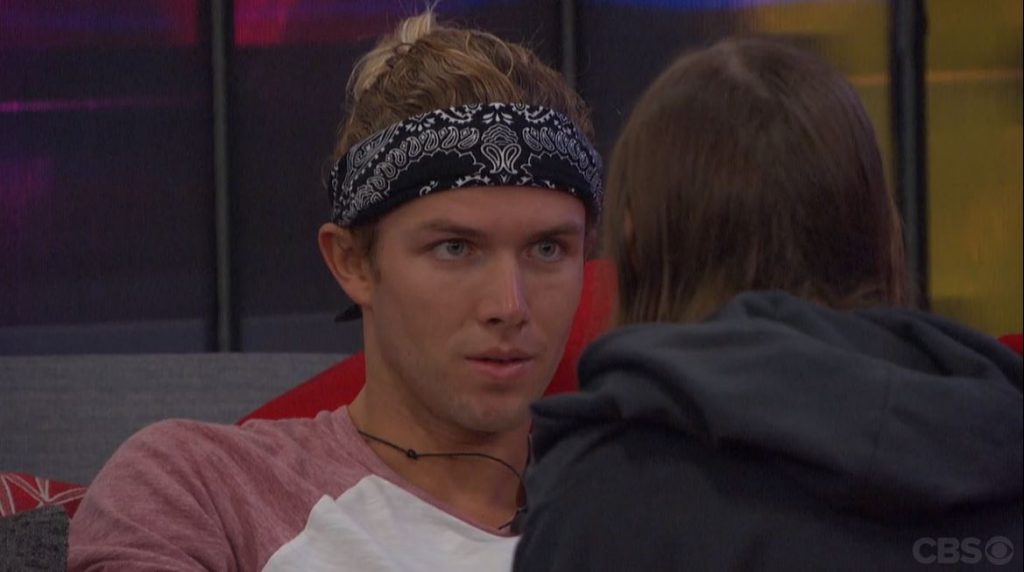 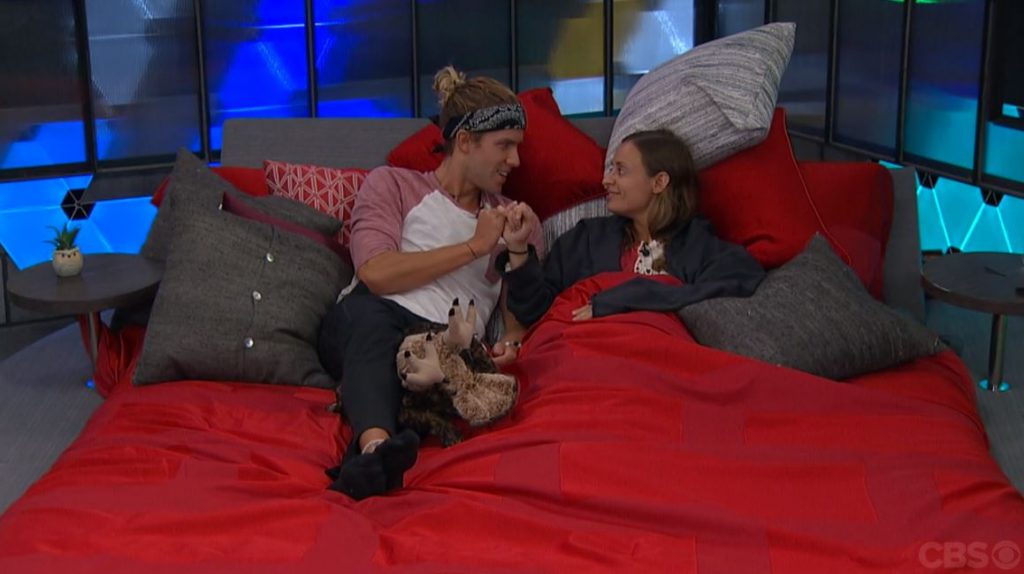 For these first few weeks, this game has honestly been entirely directed by Tyler’s moves.   Swaggy is certainly vocal about all the things he’s doing, but none of them have mattered where it counts.  Tyler has been playing it rather cool though, and his moves have impact:  getting Steve out first, and now effectively guiding Kaitlyn to backdoor Swaggy.   What could have been a storyline of the early season (Swaggy v. Tyler) is looking to be ending much sooner than expected, and frankly, I’m okay with that.  Swaggy’s braggadocio is tiring.

But Tyler’s control of his allies (such as Sam and Kaitlyn) is honestly jaw-dropping.  When we got Tyler’s intro as a doofus lifeguard, I was certain he was gonna play the role of floater or clueless boy vote.  But he turned that perception around almost immediately, and here we are in Week 2/Episode 6 and he’s running the game.  I love it.   Tyler is also funny and a good narrator, so it’s fun to have him stick around.   At this point, my money is on him to win the whole game, but we have many many episodes to go and eventually, people will figure him out.   Right?

Actually, when considering the rest of the house, they don’t seem to be playing the game much at all.  That might be the disappointing part of this season – like, have we even seen Rockstar say anything?   Same with Brett or Winston – 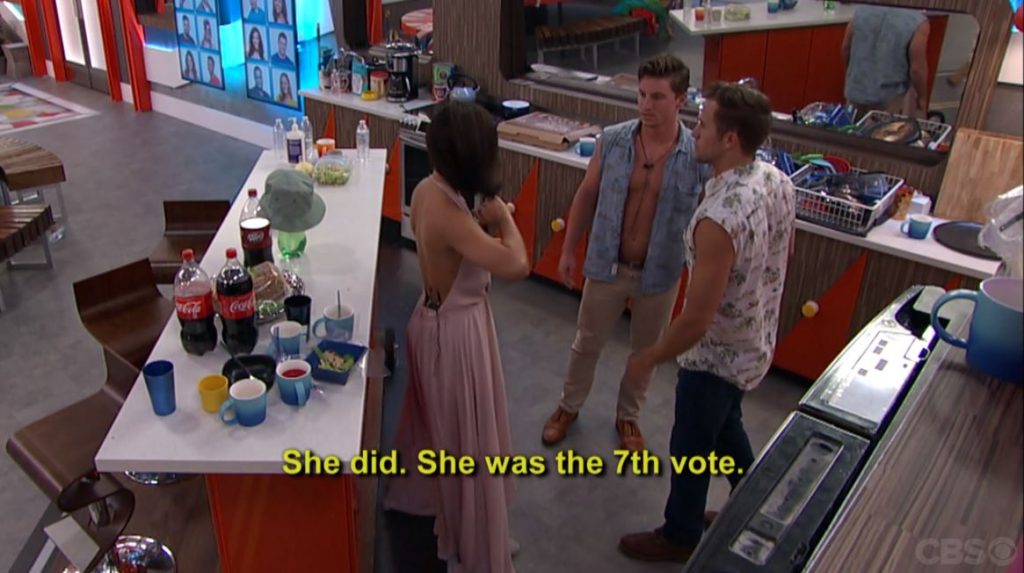 They’re broing around with each other but they’re not anything but foot soldiers and extremely attractive.  Sure, Winston seemed to get into a pissing match with Swaggy, but who cares?  Brett doesn’t do anything.   Rachel doesn’t make an impact, so she gets the #leasttrending tag –

I mean, I feel bad for her, and I admit surprise that Rockstar wasn’t the one up here getting leasttrending, but the storylines haven’t deigned to include many of these folks.   Rachel selected the Yell Crap App and will get yelled at for 24 hours by someone critiquing her game.  Honestly, this may be the thing she needs! 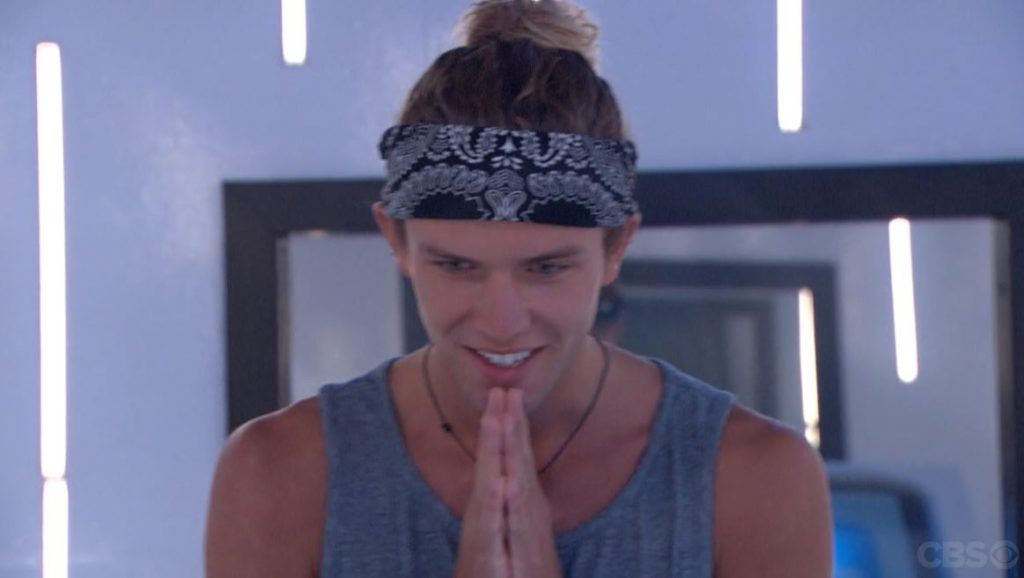 Tyler won #toptrending unsurprisingly and chose The Cloud as his Power App.   He’ll be able to place himself out of reach in terms of nominations or Veto replacement nominations if he ever feels unsafe – but the limit is that he can only do this once within the next 8 weeks.   It’ll be interesting to see if that time ever comes to pass, and if so, how it plays out. 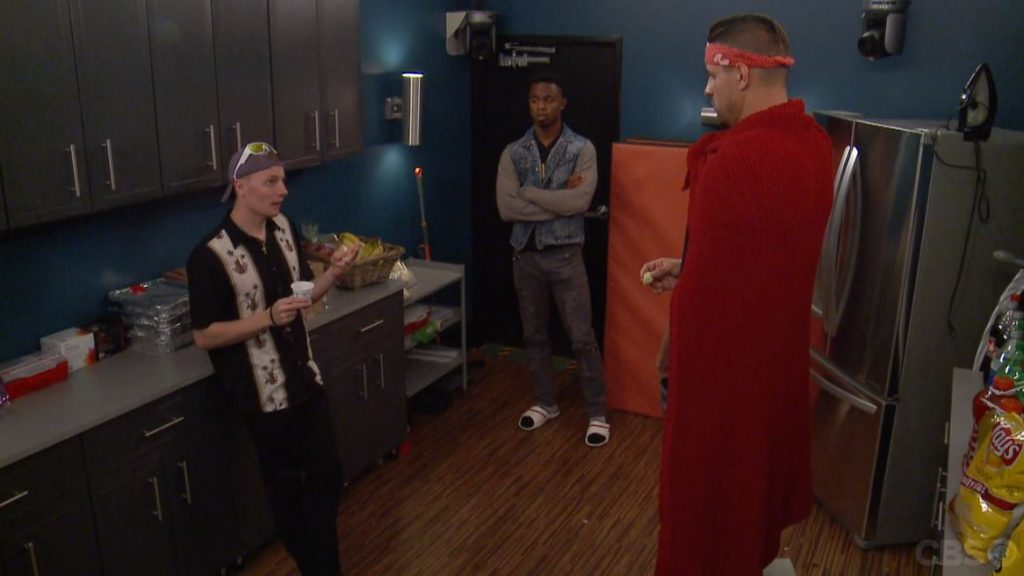 Now I know why Swaggy and Faysal (LOOK HOW TALL HE IS IN THIS PICTURE – HE TOWERS OVER EVERYONE) are panicked that Scottie has been identified by Kaitlyn as a nominee:  he’s an easy-to-control vote.  But does Scottie really think he’s a ripe target?   Who would care if he is voted out?   I get the “not getting blood on my hands” mindset, but come on.   He’s up next to Winston, and that’s probably a decent person to be up against as that’s just an obvious physical threat.  So chill.  And even though he doesn’t know Swaggy is the true target, fucking calm down, dude. 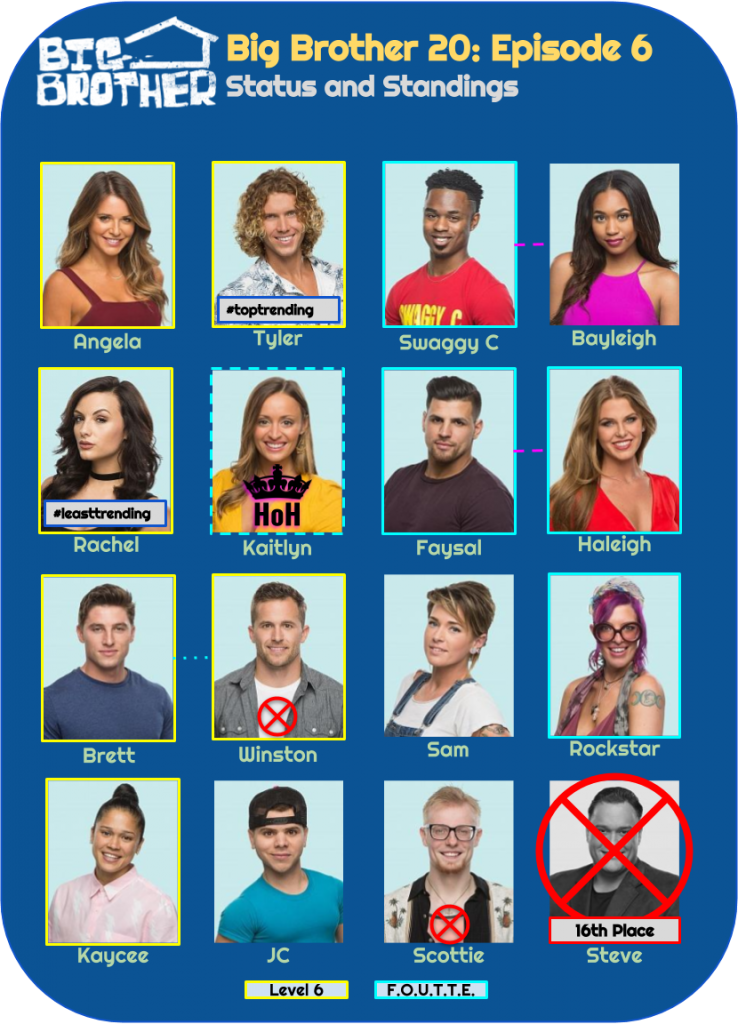 Should be interesting to see if Tyler’s Veto plans and backdooring of Swaggy happen.  If so, look for a very interesting eviction night episode!