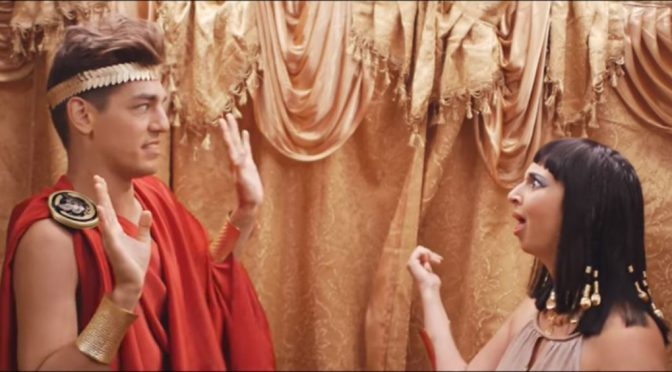 I’m naive enough (still) to think that I can crank out a post every day as a potential resolution.  We all know that is some bullshit, but hey, I’m gonna try.   BTW, the main reason I think I get behind is I have these major ambitions to post giant picture sets and that is a lot of work, at least I make it so.  Anyway, here are some things I stumbled upon in the Internet (h/t to Joe Reid’s list here: https://decider.com/2017/12/19/joe-reid-best-of-2017/) that made me laugh and I need to preserve.

First up is this comedy duo that has thus far made 3 videos of famous “power couples” and holy shit I’m dying at how funny these are.  I also kinda love how much she (Sudi Green) reminds me of Maya Rudolph and how hot and gay he (Matt Rogers) is.    The first video in the playlist below is Caesar & Cleopatra, but is followed by the Evil Queen / Magic Mirror and then by Britney / Justin.  So good.

One show that came out on Netflix last year (2017 was last year, craaaaazy) was a reboot of One Day at a Time and it’s fantastic and hilarious, this time centered on a Cuban-American family in Echo Park.  The updated theme song by Gloria Estefan is catchy as all get out, but in advance of Season 2 (coming out later this month), they did an homage to the original theme song and credits:

If you have Netflix, do yourself a favor and watch the first season of One Day at a Time.   You’ll thank me later.

Other shows to keep in mind if you’ve got an open schedule that we’ve been ripping through and loving and I’ll likely revisit in later posts:

In the next bit of random, here’s a clip from the recent critical hit movie, Call Me By Your Name.  Larry & I saw this last week and it’s marvelous and very much a gay fantasy, but damn if it isn’t captivating nonetheless.  The clip below is just a gander of the hunky Armie Hammer dancing – enjoy:

I think another post will be needed to get into the many recent movies we’ve been seeing….and yes, I’ve seen The Last Jedi three times so far and I like it even more each time.   PORGS FOREVER.