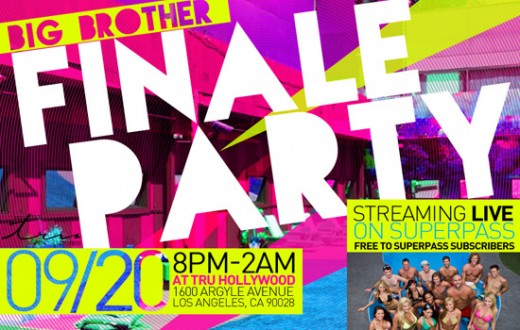 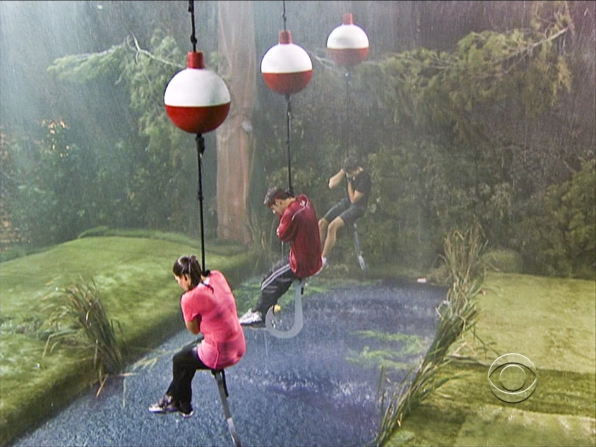 Did anything of note happen in this episode? Â WHAT A WASTE! Â There’s so much they could have done here instead of a bloody clip show. Â Why not focus on the final 3 HoH competition? Â Let’s go back to the jury house because you KNOW that place is probably still a shit show. Â But no – we get subjected to just a touch more of Dan & Danielle’s discussion and basically Danielle claiming she is SOOOOOO not falling for Dan’s tricks anymore and she’s totally going to trick HIM now. Â Oh yeah, watch out Dan!

So to commemorate the absolute lack of action this episode, here’s a picture of the beginning of Part One of the Final HoH Competition. Â It involves them hanging on to that hook, getting dunked in the river, then getting slammed against a wall. Â Fun stuff! Â Whoever lasts longest wins and gets to compete the winner of Part Two for the role of Final HoH and a slot in the Final 2.

Rather than talk about what went on in this episode….basically a lot of nothing….let’s speculate on what the different possibilities are this evening in the 30th and Last Episode of the Big Brother 14…sniff, sniff.

If the eventual HoH is Danielle:

I think Danielle would actually enact her revenge and get rid of Dan. Â Dan would of course go in to full spin mode to make Danielle see how she’d lose against Ian and taking Dan is clearly the path to victory for her since everybody hates him already. Â I would hope Ian would campaign hard against that and remind Danielle that Dan has talked himself out of way worse situations. Â If he does that, Danielle could joyously send Dan home – and right before he gets a chance at the Final 2. Â Also, it’s been said the houseguests don’t get ANY money for 3rd or worse place, unlike Survivor where there is a sliding scale of prize money. Â That would SUCK. 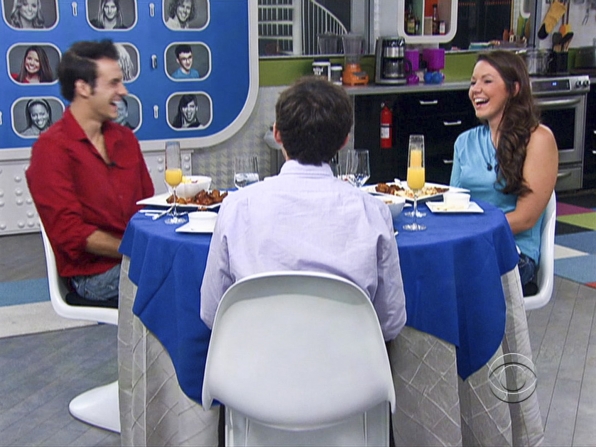 With Danielle and Ian in the Final 2, I think Ian wins. Â I actually don’t see a path to victory for Danielle at all in any Final 2. Â She’s never played an individual game and always relied on Shane, Dan, or Britney to tell her what to do. Â I think only Shane would vote for Danielle for sure, while Ian can strongly argue his case as to the moves he made and why he’s more worthy of the win than Danielle.

If the HoH is Dan:

I think he takes Danielle. Â She has been proven to be quite a loyal puppet to Dan and all he has to do is tell that and prove that to the jury members. Â Clearly, some in the jury house will never vote for Dan, especially Shane, as I watched his post-eviction Live Chat with Jeff Schroeder. Â That man is PISSED. Â But Shane would vote for Danielle anyway, regardless of who is up there. Â It’s a much harder argument to say that Ian was Dan’s puppet. Â Ian is a true viable candidate to win against Dan and Dan can’t claim much of Ian’s path. Â Hence why he’d never bring Ian as of course Dan knows this.

With Dan vs Danielle in the Final 2, it’s going to be still a little tough for Dan to win. Â He’s managed to piss off a lot of people in his path to the Final 2. Â Emotion could definitely rule the voting and if it does, Danielle would win – although it would be a vote against Dan rather than for Danielle. Â Dan’s constant need to talk/coach could backfire too as c’mon – it’s so FUCKING obnoxious at times.

If the HoH is Ian:

I would hope Ian gets over the Final 2 “Renegades” deal he made with Dan as his path to winning is much easier against Danielle as I described in Danielle’s section. Â Yet….he could have some misguided sense of honor and think that bringing Dan is a brave game move and shows he honors his deals. Â Ugh….as has been evidently shown numerous times throughout the season, Ian is NOT a good public speaker. Â Plus, when nervous, he has plenty of nervous tics that will be offputting. Â Dan’s career is all about charming and engaging people – he could easily and rightly say how much more effectively, aggressively, and strategically he played the game compared to anyone, even Ian. Â Shane wouldn’t have his snugglebuddy to vote for and could be perhaps persuaded …..uh, maybe not Shane…but others? Â Yeah, others could respond well to Dan’s smooth talking. Â Ian would be making a very big risk taking Dan with him to the end. Â For his sake, I hope he decides that $500K is a better thing than “reality show honor.” Â Take Danielle and collect your check.