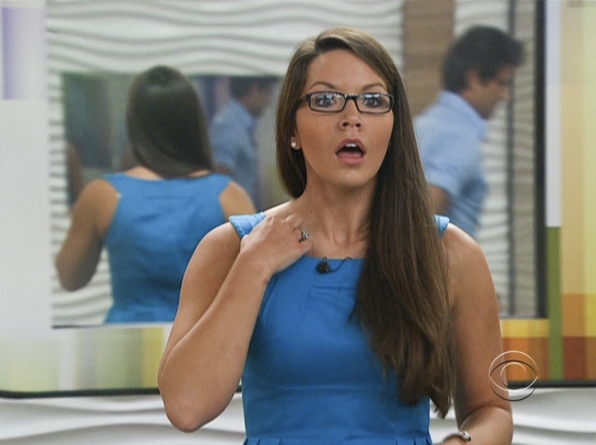 Biggest Blindside of the season? Â Perhaps. Â I’m not so sure, but it certainly cements Danielle’s reputation as the biggest patsy of this season. Â  I was certain that Ian was a goner. Â Even Ian was certain he was a goner. Â But man oh man, the force of Dan was not done yet. Â I can NOT believe he was able to infiltrate Danielle’s mind, yet again, and convince her that he had her best interests at heart. Â And poor sweet hunky yet stupid Shane was sent out the door and we were treated to Danielle’s ability to open her jaw far more than any human really should, as shown in the picture here. Â It was glorious, but sad, all at once.

Shane’s eviction was just one of a few bright spots in the episode. Â In the beginning, after Jenn’s eviction, everyone assesses their position, some correctly, some not so. Â Honestly, only Dan sees the situation correctly. Â Ian is adorably clueless and isn’t at all aware that everyone (?) is targeting him; Â Danielle thinks she’s making moves but basically, as Dan points out, she’ll do whatever he tells her to do. Â I wish that were bravado on Dan’s part, but this episode only showed how dim she is. Â Danielle nominates Dan and Ian and is Dan worried? Â Nope. Â Rightly so. 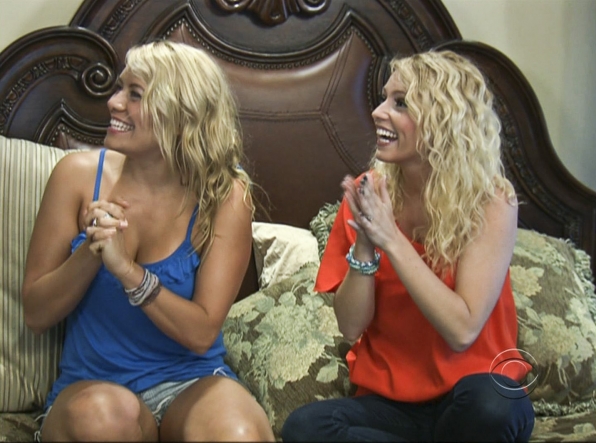 Meanwhile, in the Jury House, the other bright spots of the episode emerge. Â First up is New Age Queen, Ashley, as she meditates for a week. Â She’s at peace and blows her bubbles for peace. Â Oh, Ashley. Â Her bubbles aren’t only for peace though as she’s also channeling the great power of Bubbles to harness Dan and claim him for the Jury. Â Oh, and also to help Frank. Â Shockingly, the Power of Bubbles is shown to be a myth as Britney strolls in next. Â YAY! Â Love her. Â There’s a week of peace and then they await the next member, with Britney sure it’ll be Frank. Â She is correct, of course, and while there’s initial agreement that Dan is everyone’s biggest regret, Frank isn’t about to take any blame on himself. Â He played a moral game and always kept his word….OH FOR FUCK’S SAKE. Â No, you didn’t. Â Britney quickly shoots his ego down and reminds him that indeed, he fucked her over. Â  But of course, that isn’tÂ the same. Â Uh, yeah, it is. Â It’s fine to play dirty, but to not admit it and to actually claim the opposite is sickening. Â Totally Team Britney here. Â Fuck that guy. Â Joe manages to sneak in too and is basically stage props for Britney and Frank’s argument. Â I love Britney. 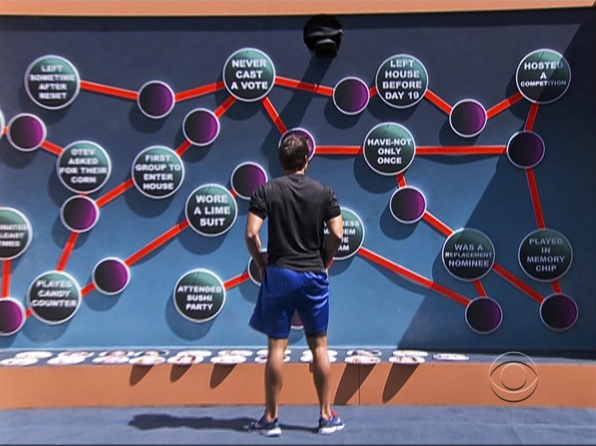 In the Power of Veto competition, it’s time to dig deep into the memory banks as the contestants have lots of houseguest picture discs to place that must correctly match the criteria strung out in molecular form. Â I would think Ian’s a surefire win what with his photographic memory, but apparently it’s not quite Marilu Henner level yet. Â He in fact keeps fucking up and stressing out while Danielle gets closer and closer to the answer quicker than everyone else. Â Finally, Danielle wins!

Is Dan nervous? Â Nope. Â He’s even got a plan to take Shane out and make up for when he didn’t do so last week with the Double Elimination. Â All it takes is to convince Danielle to use the veto on him and promise (promise, swear to God, with whipped cream on top) that he’sÂ totallyÂ gonna vote Ian out. Â Like, duh?! Â What else is he going to do? Â DANIELLE!!! Â You fucking nincompoop. Â How do you NOT see you’re getting played? Â What sense, at all, does it make for you to change the nominations? Â At this point, Danielle is a shoo-in for the Final 2 as there’s no way in hell she can argue that she deserves any of the success. Â Dan can rightly say that he manipulated her into doing everything for him. 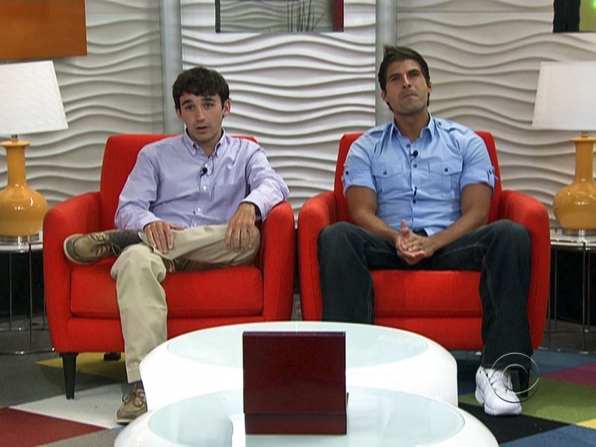 It’s even more ridiculous when Danielle asks Dan what she should do when he brings up this deal. Â UGH. Â You’re the worst, Danielle. Â Even more so than Britta (Community reference there). Â Dan tells us that he’s really shooting for the ability to honor both Final 2 deals he has – Shane isn’t in that world. Â When Danielle even tells Shane the plan, Shane is nonchalant about it. Â What’s there to worry about, right? Â At this point, I’ve had it with both of them. Â Shane DESERVES to go home at that point. Â You never agree to this kind of a plan. Â How was there no “Danger, Will Robinson, Danger!” alarm going off in your head? Â So the Live Veto Ceremony occurs, gag-inducing speeches from Ian and Dan commence, then Danielle uses the Veto on Dan. Â I wasn’t positive that CBS had psyched us out intentionally and Dan would then surprise the viewers and honor his pledge to Danielle to save Shane. Â Yet as soon as Dan was told to make his decision on who to evict and started off by saying he had to break up a couple, it was clear it was goodbye for Shane. 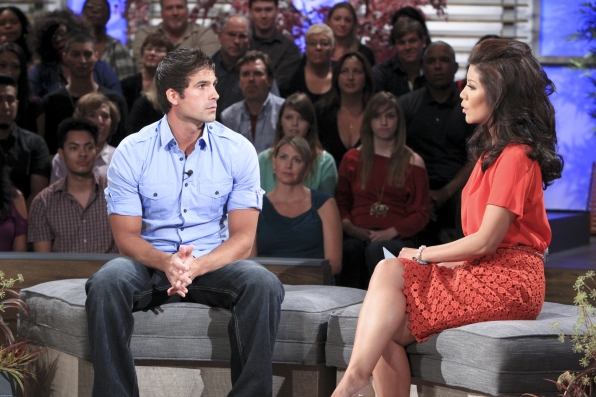 Shane is blown away by what just happened; comically, Danielle is as well with the stupefied jaw drop look of utter incredulity. Â Ian stumbles around idiotically in a haze as he realizes he’s still in the game. Â While talking with Julie in his post-eviction chat, Shane is on the verge of tears. Â Tears of rage or tears of sadness, it doesn’t really matter. Â He should have just ripped his shirt off there and made the most of it. Â Oh, well, c’mon – this is the last of his fame – make the most of your best asset. Â That body is slammin’ and really, that’s all you got, good sir. You just proved you’re an idiot and that fame clock is on 14:59.

In the house, a most amusing situation continues to unfold. Â Danielle and Dan are talking in the game room and she is demanding to know how he can continue to do this to her…and he insists that this is the only way he can ensure that she gets to the Final 2, just like he promised her soooo long ago that he would. Â Oh Dan. Â You really aren’t going to stop with these words of yours, are you? Â I imagine it’ll be a FAR different tone at the Final, but for now, this is really your only option.

So now we’re left with Dan, Danielle & Ian. Â Both Dan and Ian have to want to take Danielle to the finals – it would be idiotic to do otherwise. Â I am interested to see what plays out over the 3-part HoH competition but am also sad that there’s only two episodes left! Â It’s Dan’s to win!