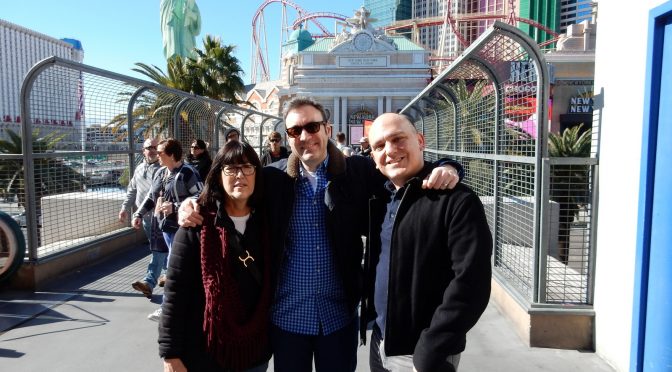 This past weekend was a wonderful getaway.  Larry & I flew up on Thursday night to Las Vegas to meet up with Fran and Joel.  They were in this neck of the woods because they were headed to a conference in Phoenix this week, so why not meet up in a fun middle ground?  So of course, we were in for that!

We all stayed at the Palazzo, which was unsurprisingly fantastic.  It’s a huge hotel and has a smallish casino, to be honest.  But it was good enough as I ended up having quite a bit of luck playing there.  Well, the first night, not so much:  I decided to try Blackjack that Thursday night before going to bed and immediately lost $100.  ROUGH.  But it was on Friday when I played some craps and holy shit, I had a fantastic roll.  I was at the table by myself, which is usually a risky move, but it was $10 and sometimes it’s nice to not have the pressure of others betting on you and your roll. But that morning?  I was on fire.  I kept hitting the points and rolling 6s and 8s like crazy.  Started with $100 and walked away with $450.  That’s a nice session.    Our first activity that day was walking around the Strip in that area, as Fran hadn’t been in Vegas for over 40 years so it was worth walking her through a lot of it.   We walked south from the Palazzo, past the Venetian, Harrah’s, through Flamingo, then past Bally’s and into Paris.  We finally took a drink break at Paris and enjoyed the ambience.

View from our room in the Palazzo

Looking towards the Mirage

Larry at the Palazzo end of the Canals

Chinese New Year was upon us this weekend

In the lobby of the Palazzo

Embarking on our first walk of the Strip

The Palazzo is insanely huge

Heading south and looking towards the Mirage

Beautiful but COLD that day

It’s the Year of the Rooster

We made it to the Linq

We found the In-N-Out

Visiting the flamingos at the Flamingo

At the fountain inside Paris

Got Joel to smile finally

Had an afternoon drink in the Paris bar area

After that respite, we crossed the street over to Caesars Palace as that is definitely something that can’t be missed when looking at over-the-top splendor.  The Forum Shoppes suitably impressed them, as did the curvy escalators!  After that, it was time to walk on back to the Palazzo and past the Mirage, which we’d return to on Saturday night.

Another drink stop back at the Palazzo casino bar area, and then it was finally time to get some Roulette in!  I don’t usually play, but it was the game that Fran was up for as Jon had asked her to play some #s.  Well, crazily enough, she was able to get some wins in – hell, so did I!  The best one was 33 hit, which I had bet on, and on the next spin, it came up again.  Sweet, and I had put another dollar on there.  35-1 odds, buddy!

That evening we had dinner at the Lavo Italian restaurant in the Palazzo, which was pretty great.  Joel’s boss and wife were also meeting us there for dinner.  The food was great, but I ended up unable to finish off my veal parmesan as it was ginormous.  But very good!

On Saturday morning, we awoke and instead of having breakfast again at the Grand Lux Cafe, we found Thomas Keller’s Bouchon Bistro – quite a trek to find, but sooo damn good.  It’s a French restaurant and oh man, their weekend menu is delicious.  I ended up getting one of the specials, chicken with waffles, and it was fantastic.  Perfectly cooked chicken…bacon in the waffles….delicious.

After breakfast, that day’s walking adventure was to take the Monorail down to the MGM Grand so we could then not only see that but also see the New York New York casino.  We had to show them the fun theming there, even if it is kind of lame.  We then walked through the Excalibur and into the Luxor, where we had another drink break.  It was a lot of fun to stop there as they were playing music videos and all of them were just a blast to watch.  Larry & I could have probably hung out there, drank, and watched videos all afternoon!  We did then check out Mandalay Bay before catching a cab back to the hotel in order to get some rest.

We still had a fun night ahead, as we had gotten tickets to see the Beatles’ LOVE show at the Mirage!  Yay!  Michancy also joined us, so it was a blast.  I was excited to see it again (yes, again, I know) as for its 10th anniversary, they changed it up a little.  After having seen it, I think I preferred the original version to the tweaks that were implemented.  It’s not a giant overhaul by any means, but there did seem to be additions and removals that changed the overall excitement, maybe?  Regardless, still a great show and the newbies all loved it.  After the show, we then headed back to the Canal Shoppes and got dinner at Sushi Samba, which is quite an experience.  Really good food in a fun atmosphere.  Michancy suggested keeping going, but both Larry & I were done at that point, so we walked her to her car and then headed back to the hotel.

Over to Caesars next

They had some pretty spectacular decorations too

At our table in Bouchon

I got the chicken and waffles – it was heaven

After a monorail ride to MGM, we walked to NYNY

A beautiful day and a bit warmer than the day before

At the Brooklyn Bridge!

At night, we headed to the Mirage to catch LOVE

The entry is very funky

And then it was Sunday and time to go home.  We actually did have a good bit of fun in the morning, as we had breakfast at the Grand Lux again (their beignets were so good and their French Toast is insanely thick) and then after getting packed, we killed some more time at the casino, with Fran able to play roulette for a while longer and I went over and played craps again.  It was great as I was able to win some money – although not as much as some guys who were playing one of the particular-table bets I’d not seen before – Repeater bets, in which if you roll two 2s or three 3s or four 4s etc before 7-ing out, you get insane paydays.  It’s of course bigger at the 6 and 8 (120-1), but the 2/12 is still 50-1 I think, and it just goes up.  For those rolls in which craps numbers get rolled a lot, which sometimes happen, these bets are ridiculous.  One of the guys at the table literally won $1000 on those bets alone.  But I know full well that those are sucker bets too, as those great rolls don’t come all that often!

Anyway, it was wonderful to see Fran and Joel even if for a little while.  They drove off to Phoenix while Larry & I took our brief Southwest flight home.  I freakin’ love flying to Vegas now – so much less stressful.