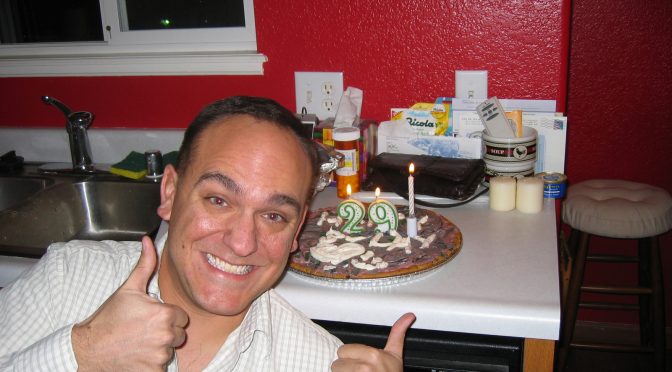 Anyways, can I just say how much I love my friends out here? They totally helped me celebrate turning 30 in style. The week leading up to the festivities on Friday was a painful one, only in that I just didn’t want to be at work. Nothing bad really happened. In fact, every day I pretty much got home early, as every day we had some event or another in the afternoon! There was a 33S (that’s the Air Force way to indicate a Comm Officer) functional meeting on Wednesday (basically, us Comm O’s are screwed – but I frankly don’t care anymore) so of course I went home after that afternoon meeting; then on Thursday, there was a going-away for two of my COMSEC folks at Fox & Hound, which of course afterward I had to go home! Then on Friday, the wonderful day that is my birthday, there was lots of fun. First at work, they filled my office with balloons and decorated it all birthday-style! Sweet. Then there was coffee and donuts and gifts, which made it that much harder to actually try and work. Fortunately that charade only had to go on till the late morning, as we had a quarterly awards luncheon to attend. Unfortunately, nobody from the 721st got the wing-level award this time. After that I had a fairly painful meeting down at Peterson AFB, but mostly because it was boring as hell. But guess what – that meant I went home afterwards!!! Then I spent some time just getting my house cleaned up, some laundry done, and listening to my awesome ‘Turning 30′ CD I made – some choice tunes were put on that CD, let me tell you.

Then Susan, Jeff, Adam, KD & Eric came over around 7pm – and I had thought that the evening would start at my house, we’d take a cab or two from there and then head to the Ritz for dinner at 8pm. Sounded good, because I had been basically begging/advocating for us to take cabs for a long time so no one has to drive. And we finally were going to do it! But I was in for a surprise – as the truth was, they got us a limo!!!! Yep, a stretch white limo picked us up at my house and was going to pick us back up at closing time (here it’s 2am, unlike Vegas – what’s closing time?). Awesome!!!! We even had champagne waiting for us on the drive out Downtown. It was a great way to start a great night. So then we got downtown to the Ritz bar and restaurant, where we had some good eats. There, Melissa, Kyle, Wink, and Tom met up with us where we all drank and ate some more. We then moved on to a nearby bar called the Thirsty Pelican (I think – at this point, I was a bit faded), where they had some pool tables and a live band and about three different floors to explore. It was okay, and a nice place for me to burn off some booze, although I did drink more there, so I don’t think I really got much better. Regardless, we ended up moving on because the place where I wanted to go was the dance club/bar called Eden, which I had heard was a freakin’ awesome place to party at. Well, we made it there around 10:45 and the fun began! It’s all on one floor, but it’s divided up into really distinct rooms, one being the ‘Red’ room, one being the ‘Ice Blue’ room, and another room being what I call the ‘Skank’ room. We hung out briefly in the Skank room, but then Susan and I went back to the Red room and found a seat in someone’s reserved couch section. They didn’t ask us to leave, so we stuck around for a bit. But you could tell they just didn’t have the nerve too – but we eventually got up, because we’re nice. On the way to the Ice blue room, we discovered that the bathrooms were unisex – how contemporary. 🙂 Finally though we all established ourselves in the Ice Bluee room, which was definitely my favorite. It was lit in white and had a very cool techno sound in it. Needless to say, lots of dancing and drinking ensued. Lots of funny stories – oh the stories. But by night’s end, and when the harsh glare of ‘Last Call’ lights came on, I knew that I wasn’t going to end the night vomiting in the limo. I was just happy that the party was drama-free and everyone had a good time. Our limo picked us up around 2am (I think – by that time I really was blitzed) and then it was back to my house! We watched TV for a while, jacked with Tom for a little as he passed out first (see pics below), and then eventually passed out. Adam, Kyle, and Tom passed out at my place (it’s a good thing I have lots of places for people to sleep) and in the morning, we watched some more TV although mostly just to try to recover from our hangovers (which I didn’t do until much later that afternoon).

And now it’s today. I definitely had an awesome time ushering in my 30s. And to think, it’s only half-done (the celebrations, that is) – because this upcoming weekend is VEGAS!!!!!!!!!!!!!!!!!!!!!!!!!!!!!! I can’t freaking wait, as I’ve even set up some actual fun stuff to do, including a night helicopter flight over the Vegas strip. Now that’s gonna rock. Also some Benihana’s, a show or two, dancing, drinking, and of course, some gambling!!!

The next 3 days will still be painful though – I really have no motivation to get any work done. Tomorrow night I go back to my craps dealing – this time I’m going to be a pit boss though, which I’ve heard is boring, but I still get paid. It’ll be at the Broadmoor again, which I can’t say no to. It looks like there are events every night if I so choose to work. That’ll be some good extra money in the long run.

So thanks to everyone who has made this birthday awesome, so far – my friends, my family, my coworkers – you all rock!!!!! Bring on Vegas now!!!! Anyways, here are pics from this weekend – I actually don’t have my trademark horrendous pics this time. Some aren’t exactly my best, but I have definitely looked worse….

Me headed out to work on my birthday

And me with my birthday cake, after work!!!

There’s Susan at my bar

Me and Susan up front

Melissa, me and KD at the Ritz

The gang at Thirsty Pelican

Eric and KD there

Kyle is just a happy guy

Me and Melissa – at Eden

Kyle on my floor

Now with some toilet paper too