It’s a brand new game in the Big Brother house, and while I definitely wasn’t a fan of the coaches’ return, this episode helped quell my fears.  There was intrigue, betrayal, sarcasm, humor, love….and mad scrambles as everyone tries to figure out what the hell is going on and who can trust who.  I am on board with this.  Plus, this episode showed me that the producers have read my demands and are agreeing to them:  Shane was rarely in a shirt and there was even a focus on His Hotness’ hotness.  Yes, this is a season I can get behind.

When last we left our houseguests, they were embarking on the first endurance challenge of the season, with the prize being Head of Household.  I noted that strength and brawn rarely serve as advantages in these kinds of challenges, and as evidenced in what happened, I was not wrong.  Not only did this epic arena rock back and forth, water poured on everyone too, soaking them.  A twist that was saved for this episode was the addition of bird “shit” which was absolutely hilarious.  They all stayed on for a pretty long time, but soon enough people started dropping.  Boogie was first figuring he’s got nothing to lose, followed by Jen and Joe.  Ashley goes next as does Dan, which is all per his “strategy.”  Unfortunately for Dan, no one is buying his act, especially not Wil.  Loved his takedown in the DR.  Frank’s, Shane’s and Wil’s brawn finally fails them and they agree to fall together, with Janelle thinking she and Britney are good so she also jumps.  This leaves the smallest folk up there and now it’s a contest between Ian, Britney and Danielle.  Who woulda guessed?  Oh, that’s right, me. 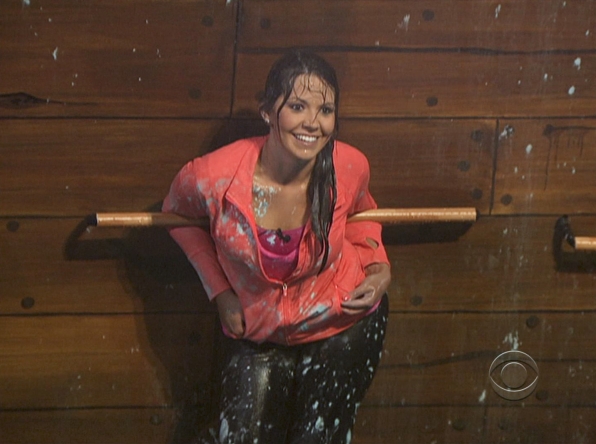 At this point, Ian tries to make a deal with Danielle to make her jump but Dan the Coach puts a kibosh on that.  Boogie and Frank disappear inside the house but we’ll talk about that in just a sec.  Despite nearly falling, Ian hangs on but knows that Danielle is a rock in this challenge. He and Britney quickly make deals with Danielle for their safety and jump off, awarding the win to Danielle.  They ended up doing that for over 3 hours.  Ugh.  Danielle’s win turns out to be the worst possible outcome for Boogie as he and Frank had hoped for Ian to win since things have become a bit more complicated for him.

We got a chance to see that Dan, being the weasel that he really is, tried to get in good with Boogie to offset any kind of potential negative fallout by telling Boogie that he hates that Frank was the real target to go home.  This was news to Boogie (really showing that Boogie is not playing this game very well) and he basically flips out.  Once Frank is out of the challenge, Boogie begins plotting and scheming and freaking out, realizing that everyone lied to him.  And he bought it.  He’s especially pissed at Danielle and Wil who apparently lied very effectively to both he and Frank about voting for Joe.  The additional effect of Dan’s little move was that Boogie realized that Dan is a liar too, which is a definite backfire for Dan. 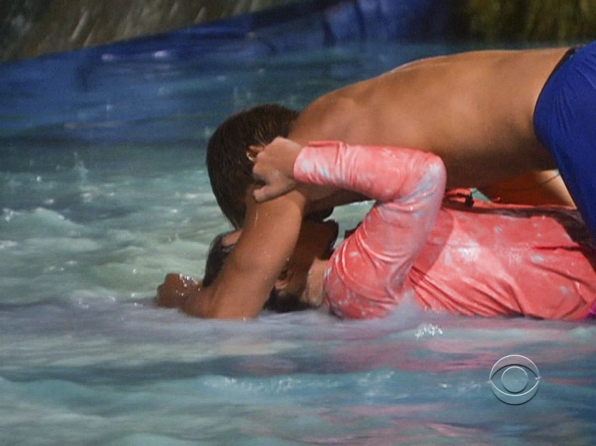 Anyway, Danielle wins HoH and gets herself a kiss from His Hotness all From-Here-to-Eternity style.   Shane is working this angle for all it’s worth, isn’t he?  I don’t think he had anything to worry about with Danielle winning HoH, but he’s hedging his bets just to be safe.  I highly enjoyed the later segment in the show showcasing Shane’s hotness.  Poor little Ian is sharing a lounge chair with Ashley doing his “flirting” thing but Shane shows up, shirtless and oiled, and aggressively works out.  Ashley, poor girl, has eyes and can’ts top looking.  Could anyone?  Ian has to laugh.  He comes up with a GREAT one-liner though:  “I was exercising with that weight earlier, but I wasn’t struggling!”  Well played, Ian, well played.  Your personality serves you well.

Before nominations are given, Boogie goes on the hunt for who can be trusted.  Britney does a great job lying right to his face and immediately embarks on damage control with the rest of the alliance:  Deny Everything.  Dan admits that he was the one to tell Boogie – all are kinda stunned and if this doesn’t raise red flags on Dan’s trustworthiness, I don’t know what will.  As Danielle discusses potential nominees with Dan, she wisely notes that Boogie & Frank are the best bets to put up since they are the two biggest threats.  Dan has other plans and thinks keeping all the coaches in the game will keep the target on his back small.  Surprisingly in this exchange, Danielle points out the problems with Dan’s ideas and they are well-thought out and I have to keep lifting my jaw up from the floor. 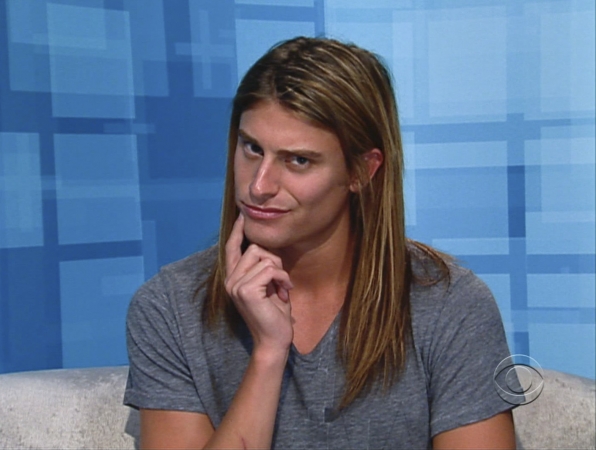 And here we are with a pic of Wil.  Why?  Because he suddenly became a very interesting character in the show.  He got super bitchy in the last episode with Janelle, and there was absolutely no real justification for it.  Yet if we put that behind us, his observations were spot on.  His commentary about Dan’s “failure” at the HoH comp…hilarious.  No one’s buying it, Dan!  His interactions with Danielle and Britney were also interesting – he made sure that Danielle remembered their deal on the boat but wasn’t fooled into complacence as he was well aware that little ol’ Southern belle had no recollection of it until he brought it up.

I was hoping that Wil’s tactics would keep him from being a pawn in the effort to get rid of Frank….alas, my hopes were dashed when Danielle ended up going with Dan’s no-coach plan.  Of course, Wil is “just the pawn” but everyone who has ever watched this game knows that the Pawn Strategy is the one most easily subverted by the intended target when the Power of Veto comes into play.  With Boogie on a tear to get some payback and Frank obviously a hard competitor, the strategy can easily backfire.  I like Wil, especially because he’s awesomely sarcastic and funny (not to mention very attractive), and hope that he survives being a pawn.  What seems clear is that Dan and Danielle have become huge targets – not only are Boogie and Frank clearly going to target them (versus anyone else in the house at the moment), Wil is likely to look for some payback of his own if he stays.

Yes, this house just got a lot more interesting now that no one is inherently safe.  Me likey the fact that this is the Big Brother we all know and love!