Well….lookie here, are things falling into some kind of place? Â Are real BB alliances beginning to be formed? Â Did the “coach” construct being removed actually let this be a real season ofÂ Big Brother? Â The answers to all these things is of course YES. Â Or 42. Â There is no answer to what is actually true alliances or not, that’s for sure. Â I’m sure clarity is found if you watch the Feeds or read Joker’s live reports of the feeds. Â I used to partake in reading recaps of the feeds, but it definitely takes a lot of suspense out of the main show. Â Although, as I mentioned many posts ago, the “main show” narrative is typically vastly at odds with what is really going on. Â And then if you actually watch Showtime2’s Big Brother After Dark, your mind just explodes. Â From boredom.

I can’t say that it’s too surprising how things shook out in this episode, as there were definite moments that foreshadowed Janelle’s backdoor. Â First, Danielle’s immense “bad feelings” about Janelle to her outright annoyance with Janelle’s existence. Â Second, Britney has been on a paranoid tear through the house since WEEK ONE (calm yourself, Brit!) and anytime someone happens to have a chat, or she notices a hole in the wall, Britney thinks something is up. Â Is it necessarily a bad thing to be paranoid, especially in Big Brother? Â Nah. Â But how you handle that does determine how good of a game player you are. Â And Britney, boobalah, you have got problems. Â Your first paranoid moment ended up in the terror-filled reign of Willie the Whatthefuck, and the next week you saw TWO of your players go out in the same week. Â Now, because you have already been burned by Janelle, there is a good reason to be weary. Â But damn. Â Although your point about Janelle’s expressed disgust with Frank does seem to contradict a clandestine bathroom rendezvous. Â Ew. Â Just typing that felt dirty. 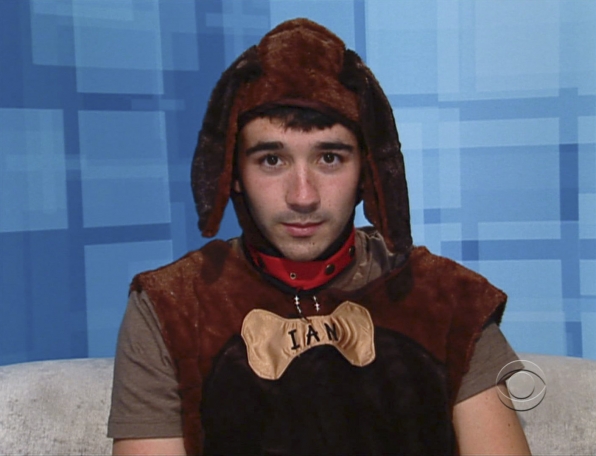 What happened at the Veto ceremony? Â Well, that happened. And I know that what I am about to type may come across as weird, but Ian is growing more attractive to me the longer he stays in the house. Â Perhaps it’s that he’s getting some sun, working out a bit, and developing a bit of a more well-balanced personality..? Â Or that he looks adorable in the dog outfit? Â I swear I’m not a furry. Â But I’m not going to rule out that Ian could be one, or is definitely interested in it. Â Talk about a PG-rated bondage thing this whole endeavor was. Â First, he voluntarily took it upon himself to keep that Veto “reward” as it correlates with his “Punishment” strategy. Â Yet it requires him to not only be unable to sit on the furniture, he has to stay in his doghouse until one of the other guests takes him for a walk (including bathroom visits), complete with a leash. Â Seriously, that is bondage fantasy shit right there. Â It’s just here it’s an adorable dog costume vs leather, straps, and spikes. Â Even Boogie had to laugh when he went to the doghouse and amazed himself when he asked Ian if he needed to go to the bathroom. Â Yeah, that’s some strange stuff. Â But still, Ian is looking cuter. Â Maybe it was that Shane was barely in this episode, and even wearing the typical hot-boy baseball t-shirt, there wasn’t much skin. Â And Danielle’s amazement at how good Shane looked in the pants wasn’t really shared with us viewers. Â BOOOO. 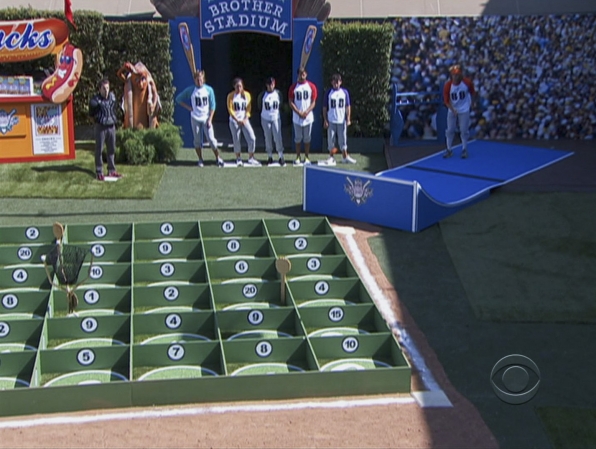 Despite CBS promising a dramatic Veto ending, the competition didn’t really deliver surprises. Â It was the challenge where in each round, whoever scored lowest would be eliminated and they’d get a prize, but the prize could be stolen by whoever was eliminated next. Â Of course, the Veto was the first prize given, and of course, it never stays with that first person. Â The final prizes ended up as such: Â Wil got $5K, Jen (YES, she managed to get in this episode! Â I guess her contract requires her to have moderate screentime at least once a month) got a trip to Maui (LOVED Britney’s disdain of the fact that Jen, who apparently does just as much as we see on TV, got this reward), Shane got a Veto Pass allowing him to compete next week, Ian got the Beginners Bondage Gear situation, and Frank…well, Frank got the Spiritard. Â And I just have to say, that’s the worst name for a piece of clothing. Â Yes yes, there is a thing called a unitard. Â I don’t even like that – it’s so close to retarded too. Â So Spiritard….yeah, that’s just uncomfortable. Â The word is uncomfortable, but I imagine having to wear a pink spandex outfit for a few days isn’t exactly Frank’s dream either, especially when he was his only hope of getting off the block once Boogie wasn’t selected to play in the Veto comp. 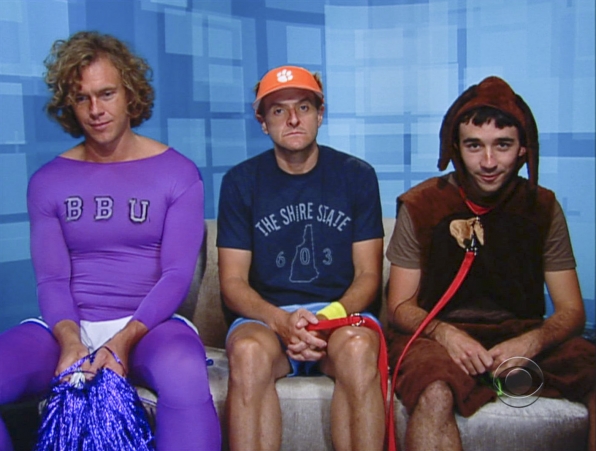 Amusingly, Boogie’s DR session with Frank and Ian was genius – Boogie’s “Perfect” team. Â But those weren’t the only teams being formed in this episode, were they? Â Oh no! Â First, we had the Quack Pack. Â Why Britney suggested that name, I’ll never know, but it immediately stuck when the 5 (Shane, Britney, Dan, Danielle + Ian) decided to ally first. Â Ian cast a net out to them in the hopes to be withÂ someone as floating just was a dangerous thing. Â They lept at it as it is still really early and 5 is a bit better than 4, numbers-wise. Â But then, Boogie and Frank did a Hail Mary, and he chose the perfect person as a rally point: Janelle. Â Obviously, the rally point wasn’t Janelle as an ally, but Janelle as a target. Â I can’t be certain if he knew that Danielle had it in for her, as it’s been made clear he and Frank can barely stand Danielle either, but damn, what a perfect pick. Â Danielle only had to hear the word “Janelle” and she was on board. Â Dan likes the idea of working with Boogie long term so he tossed out his No-Coaches plan and convinced her it was the right thing. Â Britney and Shane are playing the Sandra Diaz-Twine (two-time winner of Survivor) game of “As Long As It’s Not Me” and jumped on board too, forming the new Silent 6 alliance. Â Poor Ian. Â In an alliance for a whole few hours and already that one’s done. Â Or is it? Â I have no idea which alliance trumps the other. Â My guess? Â The 4 (Dan, Danielle, Britney, Shane) are stringing Boogie & Frank along for now just to get rid of Janelle, a very valid threat. 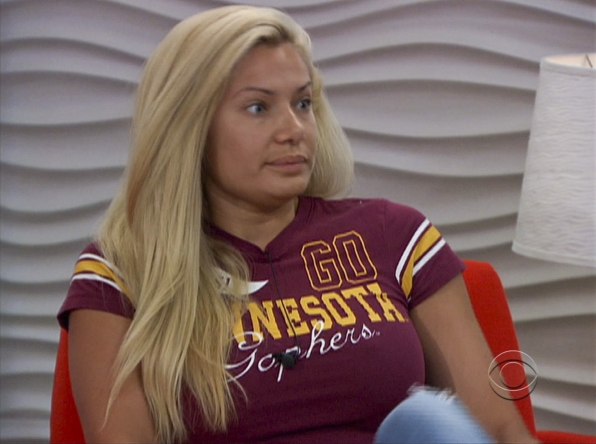 Alas, for Janelle at least, Boogie’s ploy worked. Â The Silent 6 agreed to target Janelle, Danielle used the veto on Wil, and then replaced him with Janelle on the block. Â She was obviously caught unawares (like Boogie had been in the initial nominations), having not even properly put on makeup or done her hair. Â But damn, based on this picture, I think someone needs to lay off the lip treatments. Â WTH? Â Frankly, I LOVE Janelle. Â She’s bad-ass and an emotionless machine – petty insults hurled at her mean nothing. Â I honestly have the utmost confidence that she can turn this around. Â The 4 have no love for Mike Boogie and I am quite sure she can find a way to splinter that group as that’s just what she does. Â I wish she had seen the writing on the wall though, especially after that disastrous coaches “meeting” in the HoH room. Â Was that not really a huge red flag to her? Â Loved Britney’s shocked-face at the Veto Ceremony even more. Â I don’t blame the others for wanting to get rid of Janelle – she will destroy you if you allow her to do so. Â I’m torn, but as long as Shane’s body is safe for a few more weeks, along with Britney, then I’m good if either Frank or Janelle are evicted.

Should be a good episode tonight!