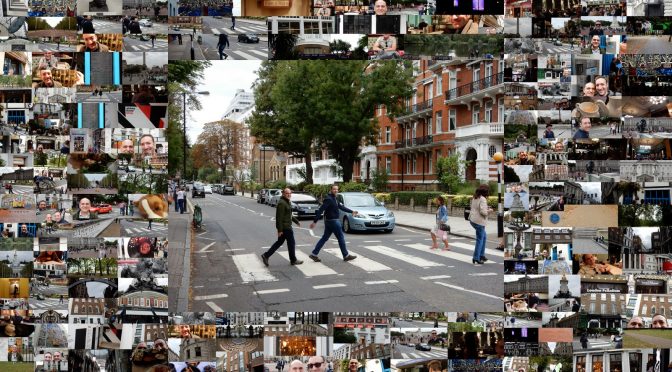 <—Previously, we avoided imprisonment at the Tower of London

We only had one thing planned on Sunday, and that was the walking tour with London Walks called Magical Mystery Tour, which obviously represents the Beatles! Yep, it was Beatles time. But that wasn’t until 11am, so we were able to sleep in quite a bit, which was nice. We then headed a block or so from the hotel to a Cote Patisserie for breakfast, and it was wonderful. French, and we no longer cared about making it British. :-).

Our French breakfast was here

Our room is behind this crazy sculpture on the hotel exterior

Something was getting filmed in SoHo Park today

Another cool thing after going back to the room was realizing the meetup point was the Tottenham Court Road station, which was walking distance and one we’d been to many times. SoHo is a great place to be. We met there and immediately saw a few cute guys also in the group, and all was well. There was one who looked so much like Liam Hemsworth, but cuter. Hard to believe, but yes. There was also a hot guy that looked a bit like David Schwimmer, but way hotter. Anyway, so the tour! We immediately learned that we had been staying and walking amongst music history while being based in our SoHo hotel. We learned that as the tour first went back to SoHo Park as that’s where Paul McCartney’s music offices are. HOLY SHIT. Then around the corner from our hotel is Trident Studios, where a large part of the 60s and 70s music was recorded, including a big part of the White Album, David Bowie’s awesome stuff, Queen, Elton John, Carly Simon, Genesis….etc. Lots of awesomeness.

We met our Beatles Walking Tour outside our regular Tube station

Walked back to SoHo Park

As this is where Paul McCartney has his offices

The tour then took us over to the Palladium where Beatlemania was born, Carnaby Street where the Swinging 60s epicenter was, Savile Row and where the previous Apple HQ was and also the site of the last Beatles performance on its Rooftop, as well as the alley area that has both the hottest club where Keith Moon asked to be in the Beatles along with the art gallery where John met Yoko. CRAZY.

A mural for SoHo

Where the Swinging Sixties Scene really took off

The London Palladium was where Beatlemania exploded

One of the legends associated with the Beatles

Some ridiculousness was happening at Hamleys

Making our way to Savile Row

A fancy as fuck shopping street

And also where Apple Records had its offices

Fortnum & Mason, which is known for their tea

This gallery is where John met Yoko

Once the hottest club in London

All of this was right in this little corner area 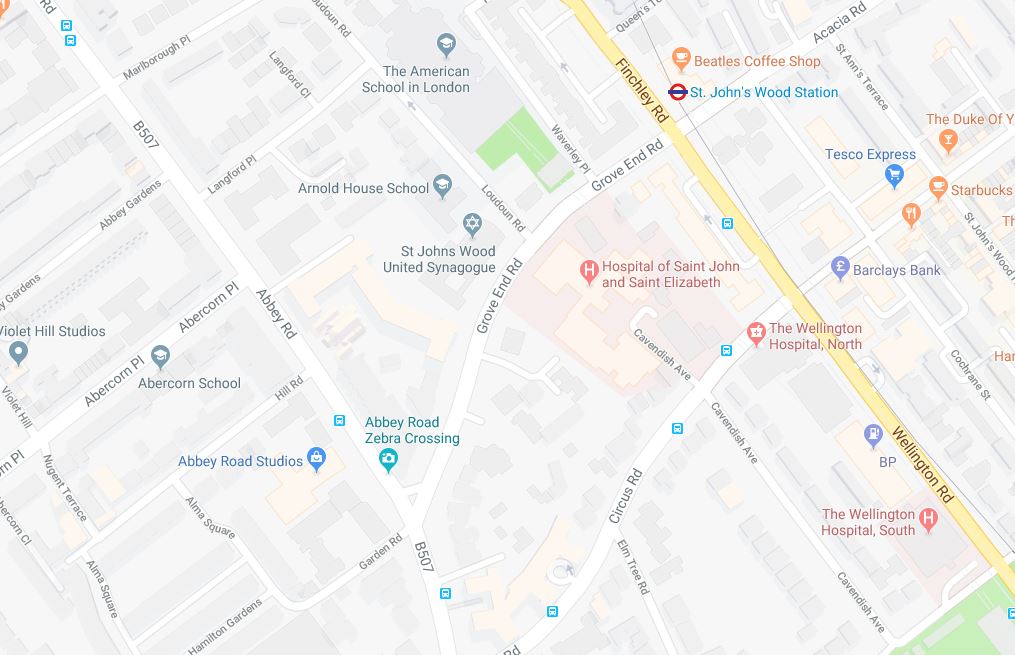 But the absolute best was yet to come, as we all then took the Jubilee line a few stops north to St John’s Wood, which is the closest Tube stop to Abbey Road!!!!!

Yep, we ended the tour at Abbey Road Studios, which of course is where most of the Beatles output was recorded as well as the location of the crosswalk best seen in the Abbey Road album cover.  So yeah, after the tour ended there, we all took pictures on the crosswalk.  Larry & I got a few good pictures solo, but I finally asked someone if they could take our picture together on the crosswalk and it turned out fantastically.   Yay!  We then went into the gift shop at Abbey Road and ended up buying most souvenirs there that we’d bought the entire trip.  It was a magical place and a great gift shop.

Yes, it’s an unending stream of folks taking this picture

I’m pretty sure this was Isabella Rossellini

Larry does the walk

We got some help to get this shot – worth it

We made it to the Studios

You can’t go into the studios but you can go to the gift shop!

It was an AWESOME store – and we bought plenty

It gets more crowded as the day goes on

Outside the St John’s Wood Station

Once ready to leave, we then returned back into London. Larry had noticed a restaurant that indicated it had afternoon tea on our walk to the Tube station, and that was one thing I’d wanted to do. So we had filed that away and so came back to it, having afternoon tea! The tea was very good, but there’s a lot to it that I’m not sure about. Finger sandwiches really weren’t to my liking and most of the cakes were not something I’d like. But happily, there was also chocolate cake and a glass of prosecco. I’m glad to have done it. May not need to do it again, although the tea was great.

You need to have like 8 people there. Champagne is always great.

And of course, tea

Strolling to Buckingham Palace and into the Churchill War Rooms

It was a great break though. At this point, with it being our last full day in London, we only had a limited time left to do stuff. So we decided to do a swoop of Buckingham Palace, St James Palace and end it with the Imperial War Rooms. We tried to walk by the St James Palace and see the Palace Guard you can take pictures with, but the entire place was fenced off. FEH. We did stop by outside Buckingham Palace for pictures (no inside visits), then to the Queen’s Gift shop off to the side of the Palace to pick up Oliver!! We have a new Corgi puppy now. Ralphie will be pleased, I’m sure. After that, we walked through the park until we got to the War Rooms museum. It is amazing. I went there back in 2002 and remember it a little, but kind of get it confused with the Imperial War Museum, I think. So it was a lot of fun and it’s very informative of a museum. I really do want to get some WW2 books into my collection and read about it more – Churchill is such an amazing figure. There really were some ‘right people, right time, right place’ situations. It’s hard to believe.

We then walked into Green Park

Made it to Buckingham Palace

This is the Victoria Memorial outside the Palace Gates

Walking along The Mall towards the Admiralty Arch

Looking back toward Buckingham Palace

And then towards Admiralty Arch

Ah, the parks. So relaxing.

This is where the Churchill War Rooms are located

We closed the place down

Walking towards the Horse Guards Building

Back through Trafalgar Square to get some Indian food at Kishoom

After that, as we were there until it closed, we walked back through town, through Trafalgar Square, and then Larry navigated us to Dishoom, a fantastic Indian restaurant in London. There was a line outside, and it’s worth it. We probably had to wait an hour or so, but again, so worth it. The first stop after getting out of the line outside was downstairs to the bar, where we did chat with a solo black woman from Bermuda. That wasn’t too long though as we then had our table back on the main level. The food was amazing, the wait staff were so helpful, there was a super hot waiter that wasn’t ours but biceps for days, and was a wonderful way to wipe out the memory of the disappointing Ippudo. Larry was happy!!!

Back at the Trafalgar Square

Outside the National Gallery again

Waiting in line for Dishoom, a really great Indian restaurant

Once inside, waiting some more at the bar

Finally at a table to EAT

Then it was time to walk back to the hotel through our wonderful SoHo neighborhood. We were done with bars and food at that point and it was time to go back and relax. Yay! Sleepy time and a nice and great end to a wonderful trip.

The Palace Theater – where Les Mis was back in 2002

Where we just had gone!