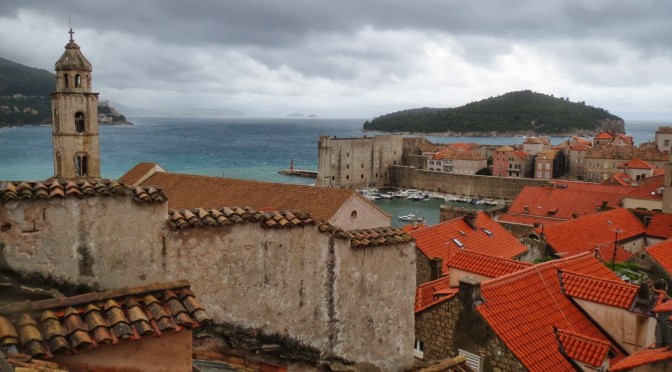 Alas, the rain returned today. It was unfortunate as now it’s been that every new location I’ve been to has been a bit drenched with rain. Today’s new area of Dubrovnik was no different. We had a tour today that involved walking the city walls of the old city of Dubrovnik, and it was fantastic. Even with the rain (and there was lots of it), it was a striking visit. I took lots of pictures and it was full of exciting views and treacherous steps, but cool nonetheless. At the end, our tour guide pointed out a good place to grab some lunch, which we took advantage of. Ended up getting some great food, with a plate of shrimp risotto and a giant plate of mussels along with some local draught beer.

Now we’re back, and just emerged victorious in the 80s music trivia contest, getting 29 out of 30 points right. We didn’t get the last point because neither of us could remember who sang the song “Lady in Red”. And what is up with the bars not opening up until 4? Please let Venice be sunny!

Side Note:  This article on Kotaku blew my mind as it shows all the locations that are used when filming King’s Landing scenes for Game of Thrones.  You know, I knew that they filmed there, but I just didn’t remember that at all when there.  It would have been a lot more interesting to remember that, even if the excursion is already interesting on its own.

Arrival and Drive to Dubrovnik

Have to say, while writing this in 2018 as I update the galleries from Shashin to local galleries, I still can’t believe how much rain we were about to endure this day.  So much rain.  As the ship pulled in, the clouds were lingering but there was hope the rain would not materialize.  Alas, that hope was squashed as soon as we got on the tour bus to take us into the old city of Dubrovnik.  Much like our time in Villefranche and Monaco, we were told about how gorgeous the views were on a sunny day…that’s great.  I did like the bridge right near the cruise harbor though.

Yay, the rain caught up to us at Dubrovnik

The Tudman bridge from our bus

Such a cool modern bridge

There’s the Equinox thru the rain

Apparently when sunny, this is a spectacular view

Excursion:  The Walls of Old Dubrovnik

We brought our umbrellas with us, thank God, as this excursion was inSANE with rain.  There was some trepidation climbing up the stone steps up to the top of the walls of Old Town Dubrovnik, but even in the rain, the views from up there were magnificent.  The excursion involved walking the entirety of the perimeter of the walls…which as you can see from this photo that I did not take, is not insignificant: 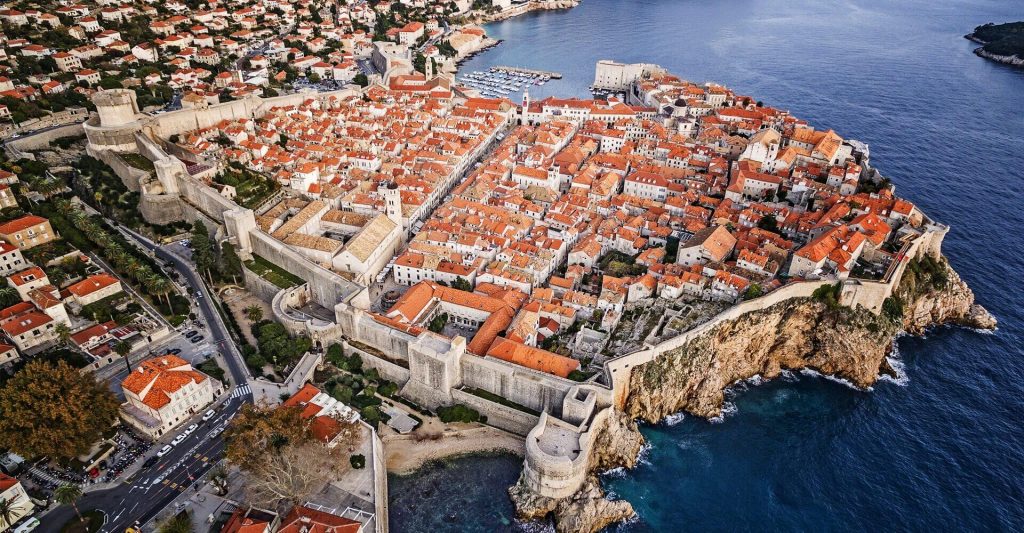 We started the tour at the middle point of the wall in the foreground of this image above, as that’s where you basically enter the city.  Then it was a counter-clockwise march around.   As we got to about the 2 o’clock position if you look at this as a clock face, the rain got sooooooo intense that the tourguide was like, look, you can stop here and go down the steps and call it a day.  Some people took that option and got the hell out of there, as it really was miserable.  Larry & I did not.  We were up for the challenge.   And honestly, as we made it to the area of the wall to the left of the harbor area shown above, the rain tapered off, and it was almost pleasant.  Damp, but pleasant.

The city walls of Old Dubrovnik

Umbrellas were the theme of this day

Looking up towards where our tour would start

The Franciscan Monastery and a really old pharmacy

Our treacherous path ahead

Larry while the rain cooperates

Looking down at the fountain

Our route will be counter clockwise

Viewing the main strip from above

In Game of Thrones, that distant hill is where the Red Keep is

The St. Lawrence fortress in the distance

Just imagine this in sun-drenched light

The rain tried to pretend it was over

Basically at the northernmost point now

Fort Bokar is up ahead, which is the Red Keep in GoT

The mediterranean roofs are beautiful, even in the rain

Heading south on the west wall

Just some dramatic walls and cliffs

The rain didn’t let up

Stairs are made that much more fun when they’re slippery

It’s fun to imagine how annoyed these residents must get

Peeking at the harbor in Old Dubrovnik

It started to POUR at this point

It was the halfway point and most people abandoned ship

I wish you could understand that this was a river

After a few minutes, the rain did let up

And we were GOING to finish the tour

Our tour guide was diligent

It really was pretty – lots of rooftop pics ahead

So not giving up

Heading towards the Minceta Tower

All that orange is mesmerizing

We climbed up the Minceta Tower

There’s our tour group waiting for the brave who climbed

Looking at the northern wall

Looking up at the tower from the base

Now time to head back down – scary as well

We had an hour or so to kill in Dubrovnik before our bus took us back to the harbor.  Many were looking for souvenirs but Larry & I wanted to get some good grub, and the tour guide pointed us towards a place that had some Dubrovnik specialties, namely mussels.  I’d never had those before, but I was up for it as you’re probably going to have supremo versions of them when they’re getting caught like right outside the walls.   It took us a little bit of effort to find the restaurant she’d mentioned, but we found it and got a table inside like mere minutes before yet another deluge of rain started.   As you can see in the pictures, many found refuge in the restaurant’s overhang.

Back on the ground on the main drag

Safe inside the recommended restaurant

Dry and awaiting our mussels

The entrance to the 3rd oldest pharmacy

I think that we had a memorable experience touring Dubrovnik, and I do wish we had better weather when visiting.   What was a kick in the face though was as soon as our ship, the Equinox, was leaving, the fucking sun came out and the area was glorious.  Screw you, sun.

The view of the dock where Equinox was

Looking out from Sky Lounge

This is Larry’s Dubrovnik Face

Had to dry out after that day

Way in the distance you can start seeing the old city

Those are the Dubrovnik walls