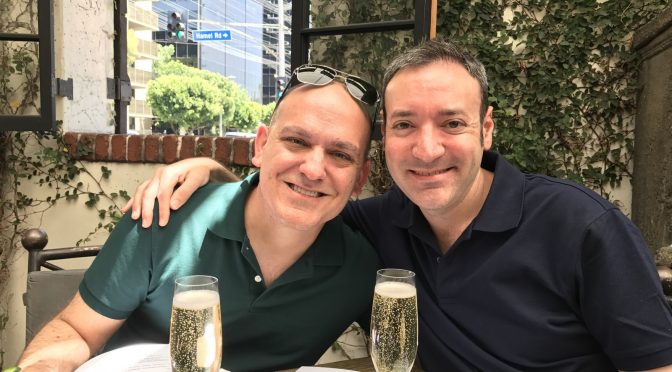 Somewhat shockingly, it’s been a year since our amazing wedding at the Oviatt Penthouse in Downtown LA.  Where’d the time go???  Happily, we’re both still just in love as we were a year ago, and as much as we were when we first met.  I think it helps to be best friends with your partner, and we certainly are.  Anyway, we celebrated our anniversary a day early as who wants to go out on a Sunday night?  So we went to dinner at Cicada, the restaurant on the ground floor of the Oviatt.  It’s a striking art deco restaurant and we’d seen it briefly before when visiting the Penthouse before the wedding.  It was a great idea to go back – and apparently we were one of a few who wanted to be there that night, as the place was kind of empty.  Even the Oviatt Penthouse wasn’t having an event that night.  Kind of surprising, but what can you do?

We had a good time, taking an Uber there, and then indulging in the 5-course menu and enjoying a lot of Montepulciano wine.  We even saw a mid-level celebrity during dinner – Doug Savant – who had a whole bunch of his family there.  Anyway, here are pictures:

Outside a familiar sight

Looking up the Oviatt

The glass windows of Cicada

No event that night for the Oviatt Penthouse

Looking back out toward Olive

The inside of Cicada – quite striking, right?

Blowing out the candles

We went up to the mezzanine level

And took advantage of exploring

We had a very wonderful time at the restaurant, the service was great, the food was delicious (Italian-ish for the most part, although my main entree was a filet mignon while Larry had duck), and the ambience was just very nice and relaxed.  A great way to celebrate our wedding a scant 365 days before.

The next day, we had to recover a bit, but then ended up meeting Nicki & Austin at A.O.C., a very popular restaurant and at times, rated one of the Top 10 in LA.  So it was exciting to get to go there for brunch!  Nicki was very sweet and got us flowers and some supercool books by Abbi Jacobson (from Broad City), and also treated us to brunch.  We’re not worthy.

Great picture of me and Larry

Afterwards, it was time to watch Romy & Michele’s High School Reunion and La La Land….ah, bliss.  And then of course the weekend ended and it was back to the grind.  But as a weekend, this one was not bad by any means.  In fact, kind of awesome.