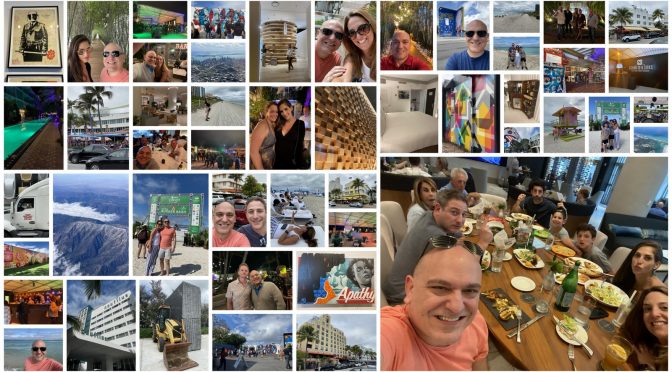 When we went back in January for Larry’s funeral, one of the first things I talked about with family back there was I’d like to go to Miami for the annual Burger Bash.  I actually wasn’t sure if it was going to be too late to make this request, but it ended up not being the case.   Jamie, Brad, and the family all made it happen, and to them, I say thank you so much.   They hooked me up with a flight and hotel and admission to the Burger Bash, which was amazing.   I’m definitely going to break down the weekend with pictures, naturally, but just the fact that they were so kind and able to make this happen was wonderful.  Enough preamble, let’s talk about the weekend!

I flew out on Thursday afternoon from LAX, getting there in the evening.   Jamie and Rachel were already there as Jamie was part of helping get everything going as the Schweid & Sons company was helping present the Burger Bash event.   Brad and Tina were not in town yet and would be there Friday afternoon.   Unfortunately, my late request did mean I wasn’t able to stay at the same hotel as them, but I ended up at the Nautilus, a few blocks north of where they were at the Lowe’s.  It was fabulous, and the room was wonderful as well.

This min-bar was something else

Room 542 has a dick peephole

THe lobby of the Nautilus

Me alone at my restaurant the first night

This wine glass got filled up a lot

Rachel and Jamie already had dinner plans, so I was on my own the first night.   I didn’t know Miami and it was already 9:30 so I was content to just eat at the hotel, and so I went to the hotel restaurant which was closing at 10.  They were accommodating though, and after sitting at the bar, I was chatting up the bartender and the manager like some kind of chatty cathy.  It made the time go by and Evan, the bartender, gave me some intel on interesting places to visit in Miami outside of Miami Beach, which is basically their Times Square and meant for tourists.  That helped me on Saturday when I did go sightseeing!    Evan and the manager definitely had a DGAF attitude by the end of the night, and I may have paid for one glass of wine but they easily poured nearly a bottle’s worth of it in my glass, even letting me pour my own glass once.   Needless to say, I got a LOT o’ wine.

Anyway, the next day I wasn’t feeling as bad as expected, although a little dehydrated.  I went down to the restaurant again for breakfast, sitting in the outdoor area to enjoy the weather.   It wasn’t too warm which was appreciated, and comfortable enough for shorts.   Rachel walked over by the time I was finishing breakfast, and we then proceeded to walk north up the shore, with Rachel giving me a tour.  It was nice to catch up with her as we really don’t have a lot of time for that typically.  She’s also noticeably pregnant at this point, which is so exciting.  Here are some pics from that walk along Miami Beach:

My view the next morning

Outdoor table for breakfast looking towards the pool and beach

Beautiful path from the back gate

The clouds rolled in and out all day

The venue where Rachel and Jamie were going to get married

The Faena is an insanely posh hotel

It was around 1 or so when we had walked back to the Lowe’s to meet up with Jamie, as well as Brad, Tina, Zach and Jake, who had flown in and arrived by that point.  Always a joy to see them, and of course my Tina, and we all had some lunch in the Lowe’s restaurant, at which point Donna and David also arrived.  They live in Florida a big chunk of the year, so they’re about an hour away by car from Miami.  After lunch, we then wandered around the beach a little, and I took a fantastic pic of END_OF_DOCUMENT_TOKEN_TO_BE_REPLACED