I’m totally gambling on that possibility too, as I am WAY up past my bedtime.

When I got home today, I took a nap. I haven’t done that in forever. But doing absolutely nothing at work is actually exhausting. I kid you not. And since we all left a little early today as it was freakin’ SNOWING in the middle of April, I was like, it’s early and I won’t take too long of a nap. Now you’d probably think that I ended up taking a 4-hour nap – well, you’d be wrong. I set my alarm like a responsible person and actually managed to get up when it went off. It probably helped that I was laying on top of the covers with only my sleeping pants on, so it was a little cold and I had to pee. But it was awesome to sleep…until it reached 11PM and I’m WIDE awake. Still. Even at 1:30 in the morning now.

So anyways, I got my Twin Peaks Season 2! And I couldn’t stop watching Disc 2 – it has Episodes 11-14, which are pretty much the best part of Season 2, as it’s when you get all the Harold Smith drama with Donna and Maddy as well as one of the scariest episodes of TV…ever. Episode 14’s reveal of who Laura Palmer’s killer is just as scary as it was back when I watched it the first time in 1990. 1990!!!! That was 17 years ago. This show is that old?????WTFO? Then after watching 4 episodes of that, I HAD to watch my Survivor, which was very entertaining. Then of course I watched the Ugly Betty special that was on, and after that, Scrubs (still can’t believe they killed off Nurse Laverne!!!!!). Was I tired at that point? Uh, no. So I cracked open the laptop and continued working on the two major projects I have in store for the site. Last night I was working on getting an old website feature back up and running again – and it is. I am not going to link to it just yet, but if any of you are serious fans of the website, you’ll remember a feature that was quite entertaining for a while. And yes, it’s exactly what you’re thinking it is. The initials were S.G., if that helps. And the other major project I’m working on is getting all these damn Europe pictures up! So of course I wanted to create an interesting front page for that picture section. Here’s what I’ve got so far – you can’t click through yet to see each Days’ events, and Days 5-8 aren’t even shown yet, but consider this a tease.

In other news, I finally got my resume mostly done. I’m awaiting a few more updates from objective eyes, and then it’ll be time to ship that baby out.

Well, keep your fingers crossed that by the time you’re reading this, I was notified of a snow day. Otherwise I’m in for a very cranky Friday. Bah!

Yep, less than 8 months away from my transition to being a Civilian. Yikes!

So today was the first day back to work, and my motivation level was at an all time low. Okay, I take that all-time-low business back. But it certainly was hard to try to care about the job. But you know I did, anyways!

So what’s there to talk about? Not much – my previous 5-day New Years weekend pretty much blew. BORING. So in a weird, masochistic way, I actually was looking forward to going back to work, for at least the social interaction aspect of it.

But I did have to check in, see how you all were, and share with you an observation I made while having cereal this weekend. I went and splurged and bought Cocoa Krispies – I don’t allow myself the Krispies too much, as it really isn’t that great for you as a breakfast, but sometimes, Hobie gets what Hobie wants. So into the shopping cart it went. Anyways (none of those first two sentences really help set up the observation…sorry) I was blissfully having my 4th bowl of Cocoa Krispies (perhaps THAT’s why it’s not really all that healthy for me…?) and I begin to actually look at Monsieurs Snap, Crackle and Pop on the front of the box. And I actually look at their faces and what Snap and Crackle (in particular) look like they’re doing. I nearly spit out the cereal because I started laughing so hard. Here’s the front of the box – you take a look: 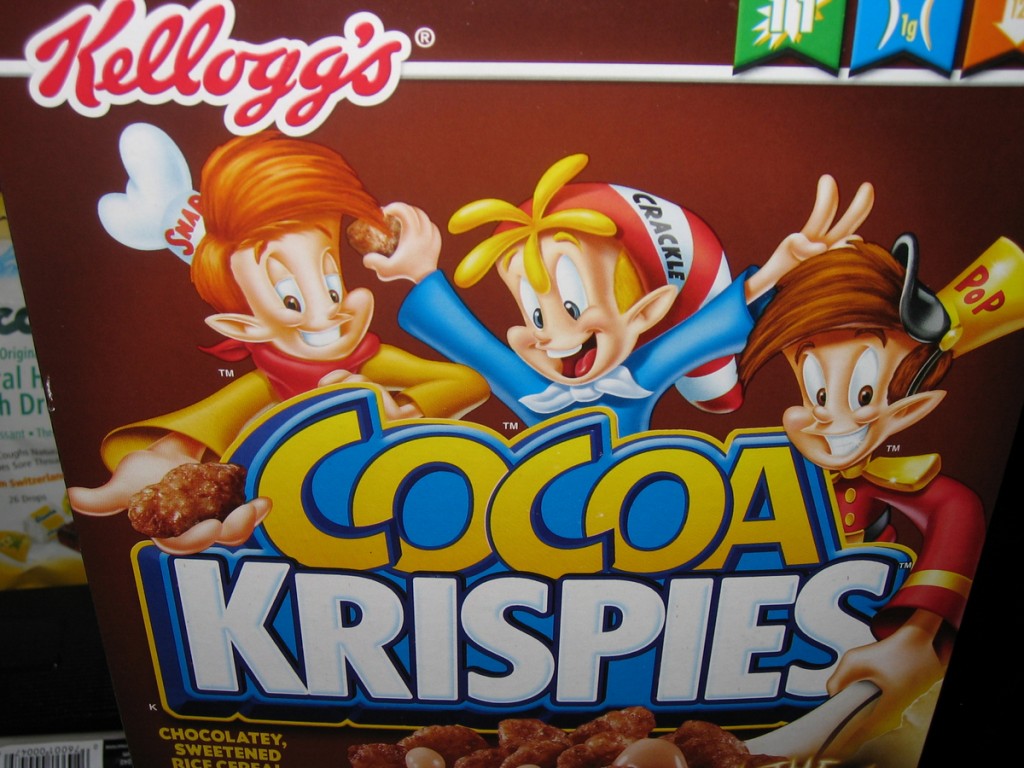 Okay, here’s what I see: Snap looks like he’s holding a piece of shit in his hand. Look at his face. He seriously looks like he can’t believe he’s holding a piece of crap in his hand. And good ol’ Crackle there is the exact opposite – he literally looks like he’s reveling in the whole Shit experience – he’s cheering Snap on & holding his own piece of crap right near Snap’s head. What a dick. And so twisted. Anyways, I didn’t let this observation ruin my Cocoa Krispies. They’re so damn tasty and addictive. But I did have to turn the box around because it was just so damned disturbing.

Anyways, that’s my observation for the day. Just had to share. Now I can throw that damn box out!

Oh yeah, I got an email from Amazon.com today – I had signed up to be alerted by email when Twin Peaks: Season 2 was finally available for purchase or pre-order. And finally, day of days, Season 2 has a sales date – April 10, 2007! It’s only taken say…6 years for Season 2 to come out after Season 1 came out on DVD. REEEEEDiculous.