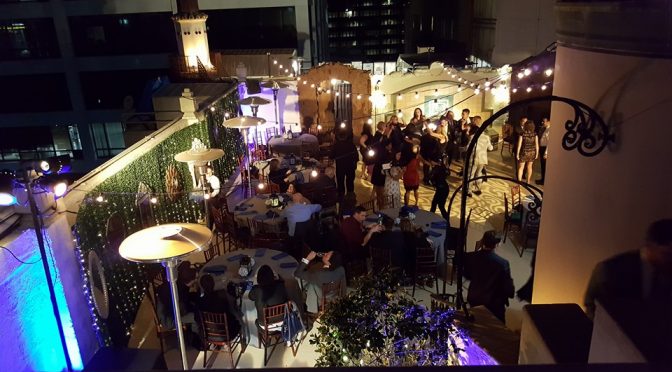 Now that all was said and done and the hard parts were all over, it was time to eat, drink, and dance!  Right after the ceremony, Larry & I went up to the upper deck area where we were going to take our official pictures with the photographer, while the guests were invited to go into the penthouse to partake in the opening of the bar!  Yay!   We provided just wine and beer for consumption, hopefully to avoid people getting too wasted (better luck next time!).  During the cocktail hour, we had tray-passed hors d’oeuvres available for everyone, including:

YUM.  We had a chance to eat all of these back in January during our menu tasting – knowing full well eating was going to be a luxury during this day, as everyone told/warned us!

And the entrees, prime rib and salmon

Also get carrots and broccoli along with garlic mashed potatoes

So in addition to the bar being open, the Photo Booth was also available and that ended up being something truly surprising, as not only did we get a great book that collected copies of all these pictures, but people also signed that too.  We recently just got all the electronic versions of these too, but I’ll refrain from putting all those up as there were a ton.

Magically, during that cocktail hour, the ceremony setup was transformed into the reception tables and dance floor area!  Larry’s seat map helped guide everyone to their tables, and the wedding party soon made our entrance into the area, with Larry & I immediately beginning our first dance to The Hollies’ “The Air That I Breathe.”  We did spend a little time working out which song would make the most sense for us and we ultimately came down to this one, which we both just love!

Happily for everyone else, after that dance, dinner was available!  We had it buffet style, with these courses available:

The toasts from Nicki & Michancy started that next period off, and I know we were blown away by what was said.  Kelly Dean came up next and informed the world of Harry & Lobie, as did Cousin Erin and Cousin Jamie.  But maybe the real star of the toast section was Aunt Helen, who everyone certainly remembered and wanted to know if she was available for parties!

Dances with the moms followed, with Larry & Fran dancing to Carole King’s “So Far Away” while my mom & I danced to The Rolling Stones’ “She’s a Rainbow.”  Dancing dancing dancing then began in earnest, and we then got to what I had been waiting nearly 40 years for, dancing the Hora for our wedding.  So much fun….until the terrifying part where we then got lifted into chairs…let me just say, that’s terrifying as fuck.  See below the fun/horror!

Sometime around 10:45pm, we finally got the cake, and MAN, it was good.  We had gotten our cake from Porto’s and the top layer was vanilla cake but the middle layer was chocolate…so when we cut into that top layer, people were happy to get some cake, but when they saw there was also a chocolate layer, a lot of people got a 2nd piece.  Yum.  Of course, when cutting the cake, there was cake shoved in each others’ mouths.  YUM.

I guess after that, it was just dancing under the stars, drinking, and enjoying the end of a 6-month period of planning and stress and realizing the damn thing had gone off fantastically.  We loved our wedding so much.  We wouldn’t have changed a thing.  As people started leaving, and things started to get cleaned up, we said our goodbyes and thank yous, and found that we had the dance floor to ourselves and the DJ still kept playing.  Our last dance ended up being happily ABBA’s “Dancing Queen” and it was just a perfect way to end the night.  So much fun.  So much family and friends around us to share in the love and joy.  It really was just a great day.

Anyway, here are various pictures from the reception taken by friends and family – I think today will finally be the day when we take a look at our professional pics.  Fingers crossed!

Awesome view of the dance floor below

At our sweetheart table

Me and my mom dancing

Helen at the fountain

Stacie & Kat keeping warm up on the roof deck

Melissa & Will up on the top deck

DTLA from the roof top

The way the Tables looked with the centerpieces arrangement