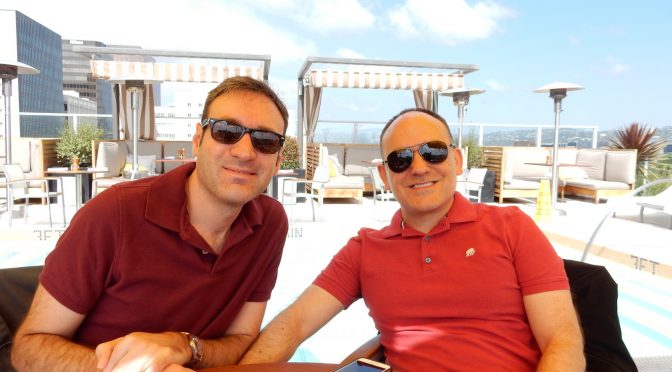 I wasn’t immediately sold on staying so far west and away from the Oviatt Penthouse – there were lots of hotels closer and in DTLA, but as Fran was learning, most of the east coast folks were going to be staying out near Beverly Hills, so she wanted to be closer to them while also having a good base for being able to do touristy things if needed.  With that in mind, the Hotel Wilshire was a pretty great place to be as it was just a few blocks away from LACMA, the Grove and Farmer’s Market, as well as the Peterson Automotive Museum.  So plenty to see, and as we also learned, the hotel was pretty damn great.  The staff there definitely took care of Fran with regards to the Rehearsal Dinner space and event, but the rooms and roofdeck were fantastic.

We booked a great top-floor suite that had lots of space and was wonderful as a wedding suite.  Funny story about the Hotel Wilshire – there’s a ridiculous suite there with it’s own roof deck and is basically just awesome and would be perfect for having an event there.  Larry & I were totally ready to book it for ourselves as why not?   We’re getting married!  Larry reaches out to the hotel POC we’ve been working with to get a price estimate, and she tells us it’d be $1500 for the suite.  You know what, let’s do it!  That’ll be fun.  So Larry lets them know to book it for us and then he gets the invoice and it’s $6000. Oh.  They meant $1500/night.  Ha, PSYCH.  We’ll take the still-fantastic suite without the private roofdeck, please.  🙂

As anyone who did visit the Hotel or stayed there, they know that the roofdeck was pretty great.  There’s a very small pool up there surrounded by lots of tables for the restaurant that’s also up there.  Very cozy.  Very LA though.  When Larry & I got there on Friday afternoon, we grabbed lunch up there and sat next to these two cute guys who were in the midst of some kind of entertainment deal.  It was hard not to eavesdrop.  And look.  🙂

View towards the Beverly Center

Looking towards the Hollywood Hills due north

You can see the Hollywood & Highland Center

The cozy but very cool roofdeck

Lunch before the big day

Looking east down Wilshire Blvd towards the Peterson, which you can just see

Looking up from the roofdeck

Man, just getting to the hotel was an ordeal.  We had actually planned to get there on Thursday evening as that’s when Fran was arriving.  But we ended up still having things to do for the wedding and the idea of getting out there just was not making any sense and was only stressing us out more.  For me, I hadn’t finished the photo video stream that would end up being projected during the reception, amongst other small things.  So we did end up getting over to the hotel early Friday afternoon – and the drive over was just nuts.  Traffic was of course insane, but then we get a call from the guy we were paying to put up the overhead lighting at the Oviatt – we apparently hadn’t paid him the remaining amount.  At first he sounded a bit gruff, but he soon admitted he hadn’t properly followed up and had mixed things up on his end.  Regardless, he was going to get the lights up as requested that day and we were going to Paypal him the money once we got off the crazy streets of LA.  Nothing like that kind of stress the DAY BEFORE THE WEDDING.

We then got there and had some lunch as you could see in the pictures above, and after getting slightly settled, my mom and Fran visited with us in the room for a little while.  Happily my mom was there in one piece as she also had had her own adventure in LA traffic that day too.  We almost could take these things as signs, but guess what, neither of us are superstitious!

Before we knew it, it was already time for the wine hour that the Hotel Wilshire provides nightly since it’s a Kimpton and they always hook you up with free wine!  That’s when cousin Erin showed up thinking the party was at 6, but she had mixed up the wedding time (from the next day) with the rehearsal dinner.  C’est la vie!  Anyway, it all worked out, and then people started showing up and sure enough, it was a fantastic Rehearsal Dinner party!

Breakfast with Mom the day of the wedding

About to take the big plunge!!!!

Walking by the Peterson Auto Museum

This place stars in quite a few diner scenes

Looking toward the Hotel – note the roofdeck

The next day, Wedding Day, was not ridiculously stressful, although there were certain factors in play.  First, I was a bit hungover as I had drank ALL the white wine the previous night.  I had a damn good time, so that was the important thing.  So there was some recovery needed but that was helped by having breakfast up top with mom, some coffee, and just some time.  Second, Larry had forgotten to bring a white undershirt in the hecticness of our schlepping all the things we’d been building to the car.  There had been 10 lanterns, 6 wedding party bags, all the clothes, all the signs….it was a crazy schlep.  Anyway, since we did have time as we didn’t need to be at the Oviatt until 4pm, we decided to go for a walk to the CVS because according to Larry, they sell white undershirts.  I’d never heard this nonsense before but he was pretty sure of himself, so off we walked.  Our journey east on Wilshire to Fairfax meandered by the Peterson Auto Museum which is so cool to look at, then north on Fairfax through some crazypants parts of town.

We get to CVS and lo and behold, I’m not crazy, but Larry might be.  CVS doesn’t sell undershirts.  Luckily, there was a KMart in the same shopping center on the other side of the Whole Foods (what a fucking mix of stores, amirite?) and they certainly had undershirts.  As well as also having realllly slow checkout lines.  It’s still strange to think that on our wedding day, we were schlepping around LA looking for undershirts and going into a KMart for the first time in what had to have been decades for me.  So yeah, that was our morning and early afternoon of the wedding!  🙂

As for the day after the wedding, I didn’t take any pictures but we did have a chance to get breakfast again and with Fran & Joel as well as Allan & Nancy before everyone went to the airport to head home.  These eastcoasters weren’t messing around and were getting promptly out of dodge, although at that time, NYC was getting rain so they were definitely getting a raw deal in leaving the beautiful weather we were so lucky to get around April 30.

Alright, I think the next post, we’ll FINALLY get to the Oviatt Penthouse on the day of April 30!  I think there’s still a few posts in just that, likely the Setup and Pre-Ceremony stuff, the Wedding Ceremony, and then of course the Reception.  So glad so many people were taking pictures!