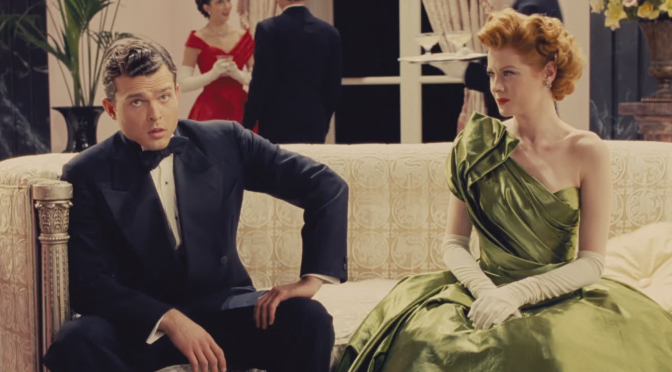 I was looking forward to seeing the new Coen Bros. movie, Hail, Caesar! regardless, as it looked like a funny madcap movie set within 1950s Hollywood with lots of interesting actors playing various crazy roles.  George Clooney as the matinee icon, Ralph Fiennes as a finicky director, Scarlett Johanssen as a feisty actress, Josh Brolin as the studio head, and Channing Tatum looking ridiculously cute in a sailor musical number.  Count me in.

So if you notice at around the 1:13 mark in the video above, you’ll hear in voiceover the words, “Laurence, Hobie,” and guess what, that’s not misheard.  The extremely adorable and cute cowboy star who nearly steals the movie is named Hobart “Hobie” Doyle.  I kind of couldn’t believe this was happening.

The video above is a small behind-the-scenes about the Hobie character, but doesn’t give much away which is good.  Hobie’s role is pretty damn great, and honestly outshines many of the other parts.  Still, Channing Tatum’s super-homoerotic sailor number gets very high marks, but yeah, it was kinda nuts to keep hearing my name in this movie.  And that he was really named Hobart too.  I smell a renaissance of my name in the making!!!!

Anyway, the movie is a whole lot of fun and very very funny.  The scene between Hobie and Laurence St. Laurentz when Hobie has to stop playing a cowboy and instead play a society man….”Would that it were so simple…” –it’s an amazing scene.  The whole movie is quite good though and everyone is fantastic in it.  A nice way to spend a February afternoon, if you so choose.