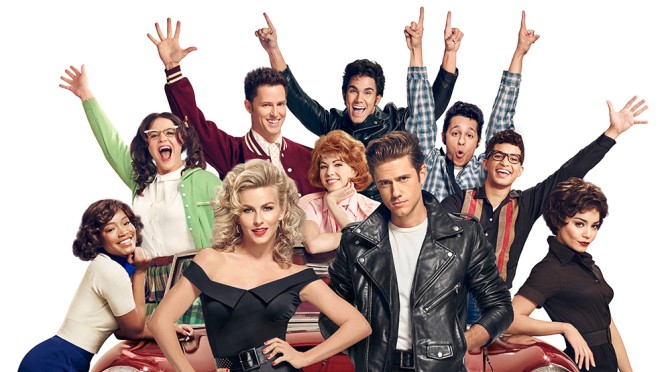 After NBC came back with a really strong live musical in The Wiz Live!, it kind of seemed like FOX’s Grease Live! was just going to be an embarrassing also-ran.  The commercials looked cheesy, and there just didn’t seem to be much in the way of an interesting take on it being advertised besides mimicking the original movie.  But shut my whore mouth….because FOX came out guns a’blazin’ and threw the muthafuckin’ gauntlet down at NBC.

It was immediately apparent that certain criticisms of The Wiz Live! had been addressed when the production had an audience mixed in throughout the sets.  Second, the production design was enormous in scope.  There were outdoor sets, there were huge inside spaces, and there were scenes that had such amazing quick-change elements that just left you stunned:  the performance of “Freddy, My Love” and “Greased Lightning” were two numbers that immediately come to mind.  Third, they decided to not only include numbers from the movie but also brought the stage’s songs back into it that had been shortchanged in the film version.

The entire thing was a pretty awesome spectacle and I’ve got to give it to FOX for rising to the challenge of really making this memorable.  I guess I’m not quite as scared as I once was when hearing they were tackling The Rocky Horror Picture Show….but I still blame them for what Glee did to it.

It’s kind of awesome that we’re getting live musical performances on network television – I still loved what The Wiz Live! did (that entrance into Emerald City is still magic and endlessly watchable) but what it lacked (emotional connection with an audience, a freakin’ curtain call and an encore) Grease Live! did and more.