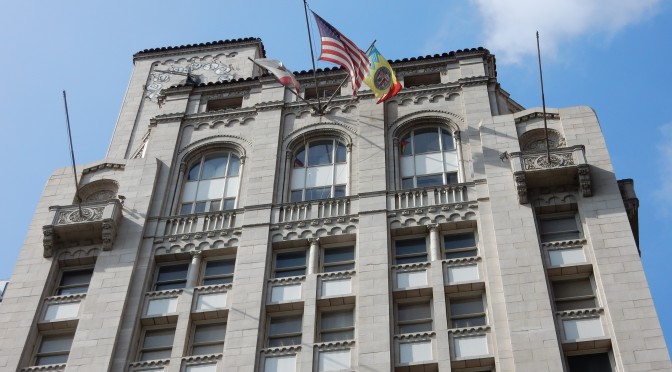 Actually, yes, the Oviatt.  As in Oviatt Penthouse.  For a wedding.  As it is awesome.  We just came back from a tour of it and it is just amazing.  The building that the Oviatt is in old and has tons of art deco styling, but the views from when you’re up top are just fantastic.  Plus, while we were waiting at the bottom before heading up, both Larry & I thought it looked REALLY familiar to what American Horror Story: Hotel‘s setting was, and it turns out, it IS the setting for the show.  Obviously it’s sets for pretty much everything, but the exterior was what was used.  That’s AWESOME. Plus a ton of the interiors were used for the movie The Artist while also used in Mad Men.  So yeah, we’re pretty much sold.  Now it’s just getting a date set, I think.  We’re going to sleep on it, but I think it’s kind of what we want and it’s great.  I know I said this about the Queen Mary too, and while that is a fantastic venue, the Oviatt kind of trumps it in terms of thinks we’re wanting. Here, take a gander at some of the pictures:

This is the exterior of the building – the Hotel Cortez for you AHS fans.  Otherwise, it’s the Oviatt building.  I think.

These are some of the shots of the interior areas where you’d hang out after the ceremony and during the reception.  Art Deco all over the place.

Up top – this is pretty fantastic.

And yeah, the exterior is pretty cool.  I could like this.

All the shots I took are below:

The Oviatt Building from outside

In the Cicada Restaurant below

In the outer lobby at street level

Entrance to the Cicada

Up in the entry room of the Penthouse

Basically this is now the foyer

Looking towards the elevator

In the Suite’s bathroom

In the bridal suite still

Likely the best place for the cake

Up on the penthouse deck

Lights play a big part of the magic at night

The tent was up as there was chance of rain

You’re right in the thick of LA

Bathrooms are down a floor

It’s the Cortez – or the Oviatt