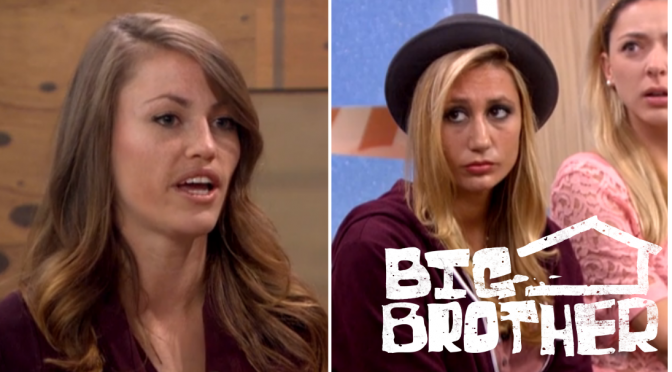 Well, Becky’s plan this week went pretty swimmingly, wouldn’t you say?  All the various schemings, which we’ll get to, were interesting, but when the chips were down, Becky went for it.  She straight-up told Vanessa exactly what she needed to hear to calm her down, then happily got that knife right out and put Vanessa up on the block next to Shelli.   Becky even added an unasked for reason as to why she put Vanessa up there, which all came down to this: Vanessa earned this and she has no one to blame but herself.  Damn straight.  Still kind of in shock that Becky, of all people, went and did this.  I almost feel bad for Vanessa, but Becky is not wrong about Vanessa.  Vanessa constantly backstabbed, freaked out, and disposed of people she had no use for.

All the Deals!  All of Them! 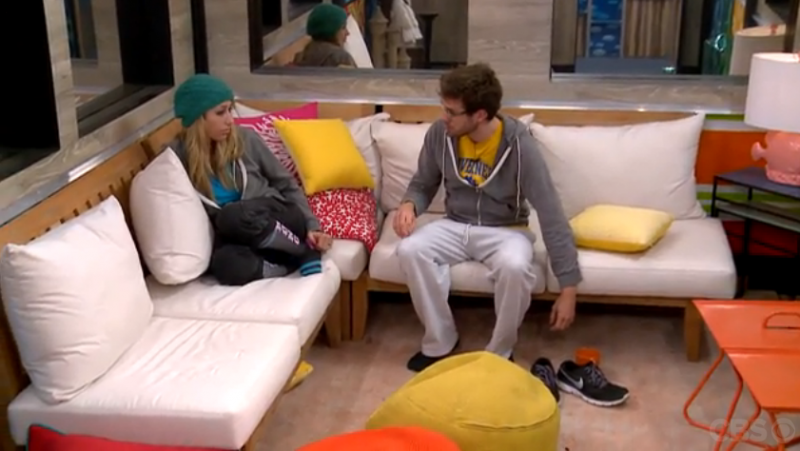 No one felt safe and everyone was strategizing about how to tackle the Veto competition and the decision about choosing players, if it came to that. 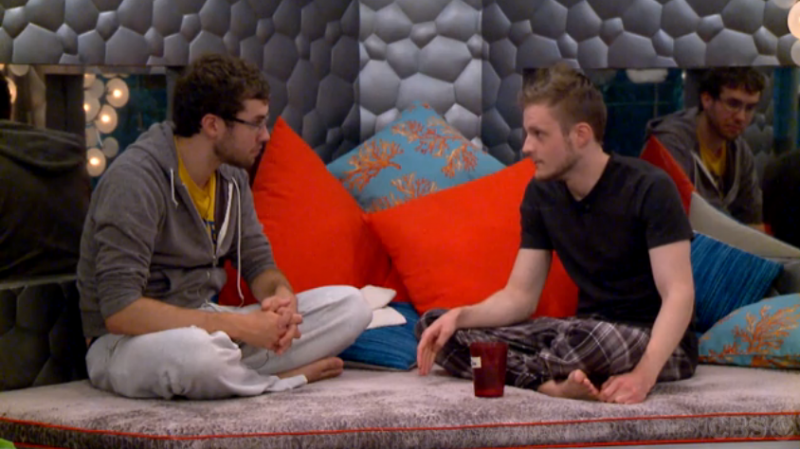 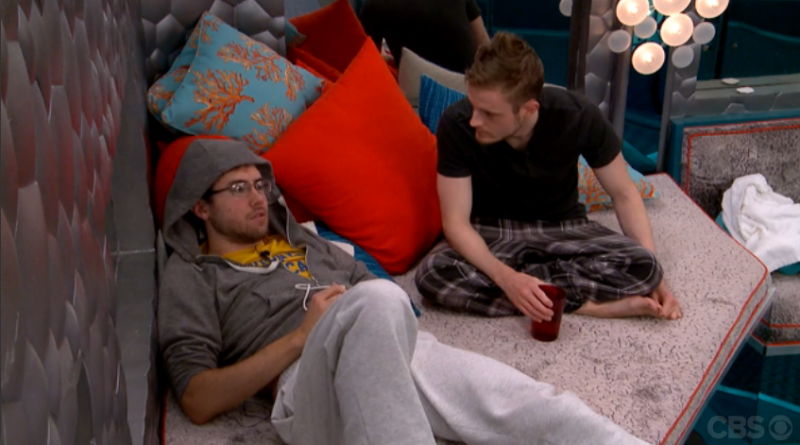 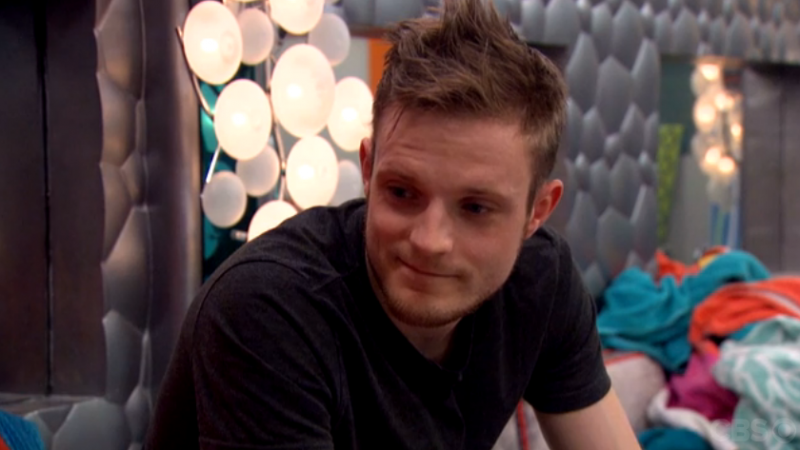 Okay, this John is pretty damn great.  John and Steve have a friendly alliance and they’ll talk strategy, so John gives Steve details about what the real plan is and that Vanessa’s the target.  Steve is bummed he can’t try to help Vanessa as if he does, he’ll become a target and that’s no good when you’re already on the block.  Steve is panicked that he could still be the target and Johnnie Mac confidently assures him that in fact, Steve is no one’s target as Steve hasn’t done anything.  L-O-fuckin’-L.  I mean, c’mon, Steve, boobalah, get your head out of your ass.  As I ranted about in the last post, you’re no threat to anyone.  John’s face in that last pic also cracks me the hell up as that’s him telling Steve that not only will John not use the Veto on Steve, Steve needs to lose the Veto to make sure that the plan to backdoor Vanessa happens.  Dems da breaks, Steve-o.

I loved this challenge a whole lot last year, and so to have it come back again without any warning, was a happy surprise.  I’ve collected the BB17 covers here, so feel free to peruse and be weirdly aroused by Clay’s almost obscene cover….drool….oh, is that just me? 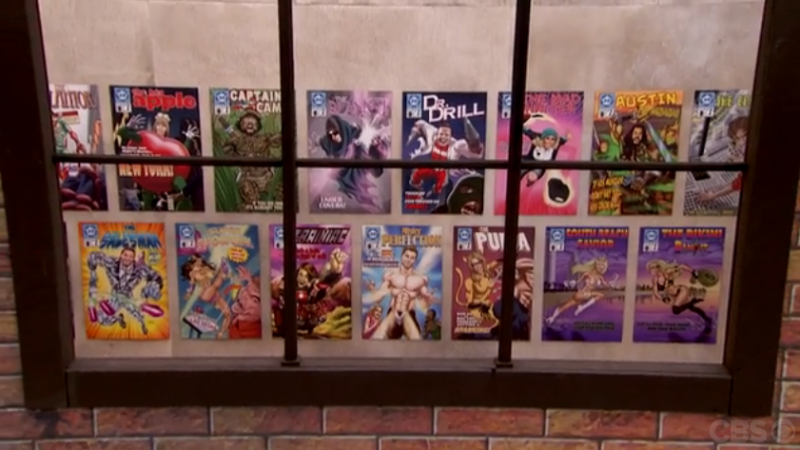 Anyway, the gist of the challenge is that one at a time, each contestant has to ride a zip-line past the window above, and remember the placement of each comic book cover and recreate that on a different panel.  The real trick though is that there are two of each cover, and you have to make sure you put the right version up in your recreation. 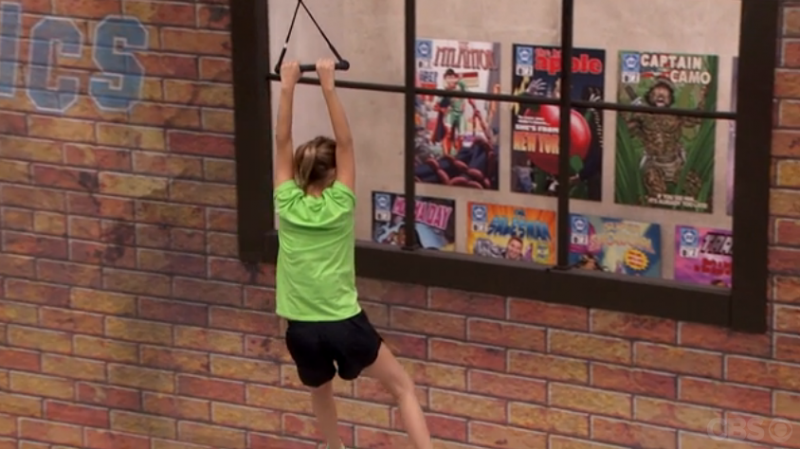 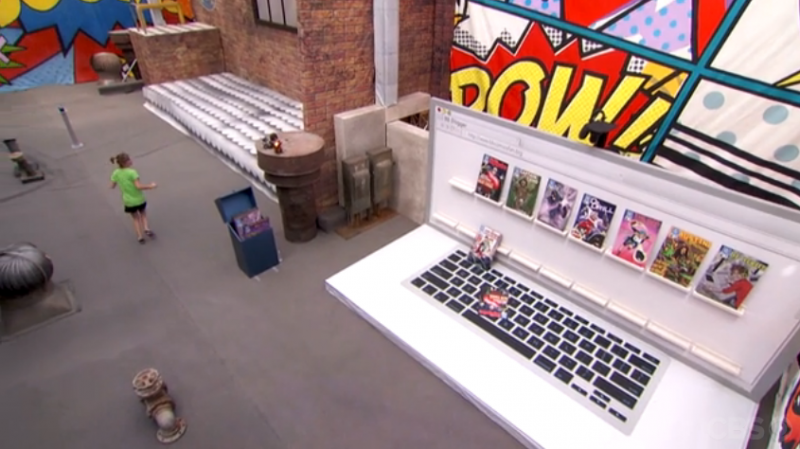 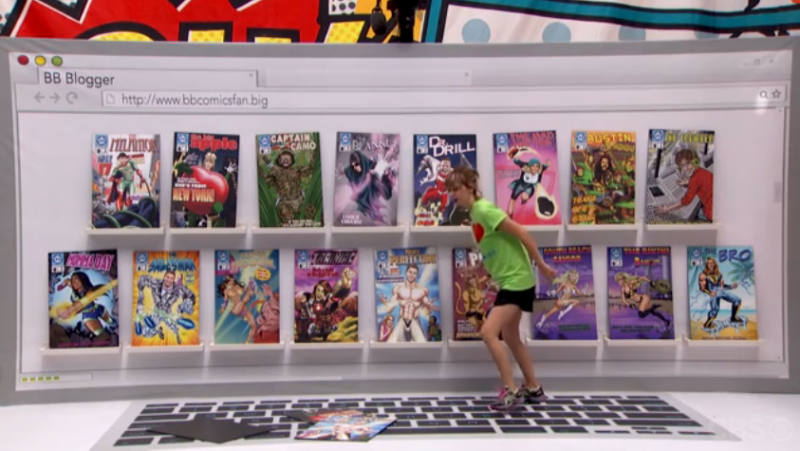 I found it funny that some of the contestants got hung up on the very people they were closest with.  Shelli gets everything right except for Clay’s, where she gets the hotpants wrong.  Austin gets hung up on Liz’s.  Steve, who has a weird antagonism towards Becky, gets Becky’s wrong. 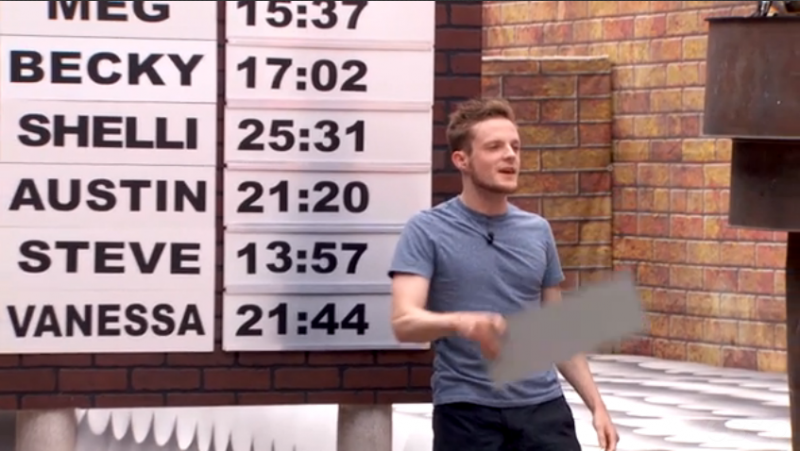 In the end, even though Meg did surprisingly well, Steve does better and wins the Power of Veto!  Surprise surprise, Steve wins something.  At least he’ll have something to brag about if he manages to get to the end!

Pulling a Fast One on Vanessa 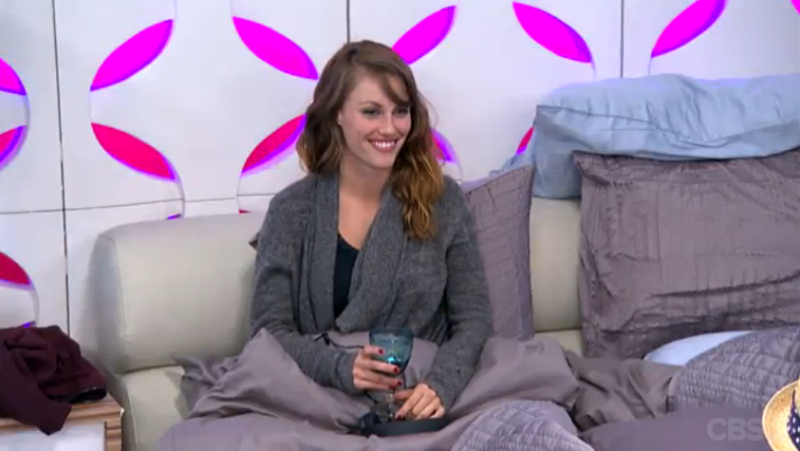 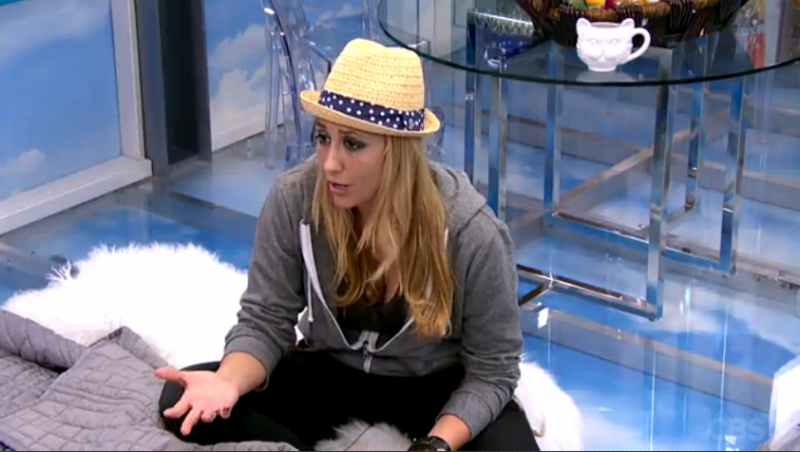 Look at ol’ Becky there, happily smiling while talking to Vanessa.  You know why she’s smiling?  Because she has absolutely no qualms about telling Vanessa whatever it is she wants to hear.  Sure, Vanessa, you’re totally not going on the block.  We are totally cool.  The plan this week is of course the plan that we all agreed to earlier (which I guess involves backdooring John?) and why would anything be different.  Relax, Vanessa, you’re not the target.  And damn, Vanessa buys it hook, line, and sinker.  Suddenly you see the relief wash over Vanessa’s face as it’s clear to her that Becky wasn’t gunning for her after all.  Happy day! 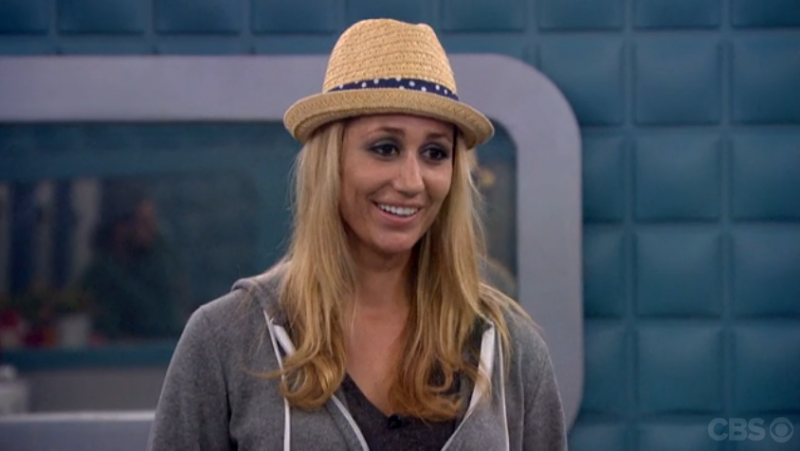 Oh man, Jackie & Meg are probably the MVPs of this hoodwinking right after Becky’s star-making performance up in the HoH room.  Poor James gets cornered by Vanessa to confirm the plan is indeed the same, and James stammers and stutters so much that Vanessa calls him out for finally bullshitting her.  That’s when she goes up to Becky as described above, but then James goes and tells Jackie & Meg what he did.  They’re annoyed, but now they’re ready as well for whatever Vanessa might say.  And damn, they deliver.

The reassurances and smiles Meg & Jackie give her are the cherry on top of the Revenge heading Vanessa’s way. I could have titled this ‘Dark Moon’s Revenge’ (although I’d probably get sued by the Transformers movie people for getting too close to their movie titles) as it’s clear there’s payback-galore happening here for that betrayal.  Seriously though, how good were Jackie & Meg when reassuring Vanessa?  I was blown away.  So confident, yet laid back about it all.  Even Jackie’s concern that maybe Vanessa had heard the plan was changing?  Perfect hesitation.  And there’s Vanessa, all relieved and ready to keep working with them in the future if they want.  Oh, Vanessa, they don’t want. They don’t want at all. 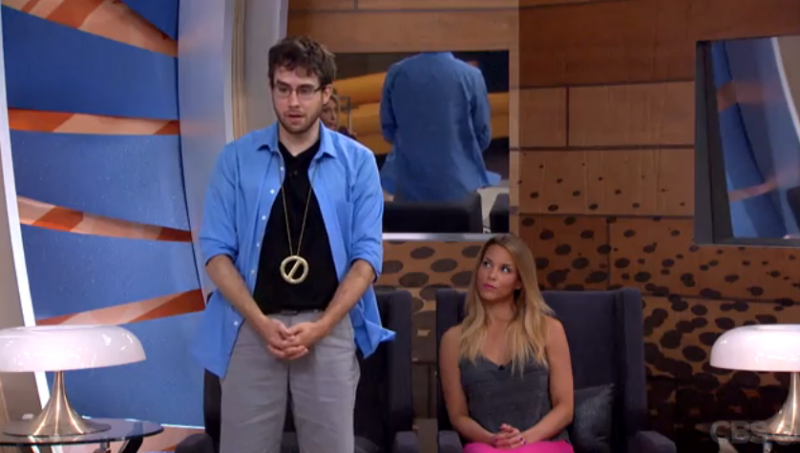 So duh, Steve won Veto and so Steve uses the Veto on himself.   Time for a replacement nominee! 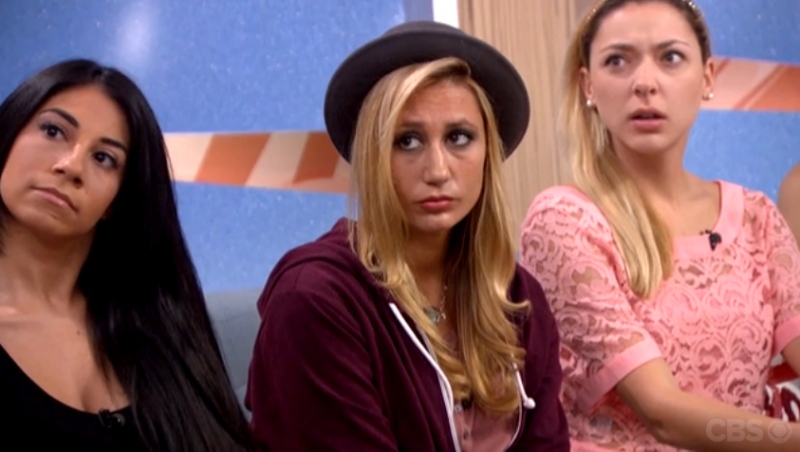 Here’s when Vanessa hears her name and realizes that in fact, no, nothing was good and you were indeed the target.  Jackie’s face is like, “take a seat, bitch”, while Liz’s (or Julia’s? I can’t tell) is kind of shocked and full of the realization that The Sixth Sense is going to lose one more member. 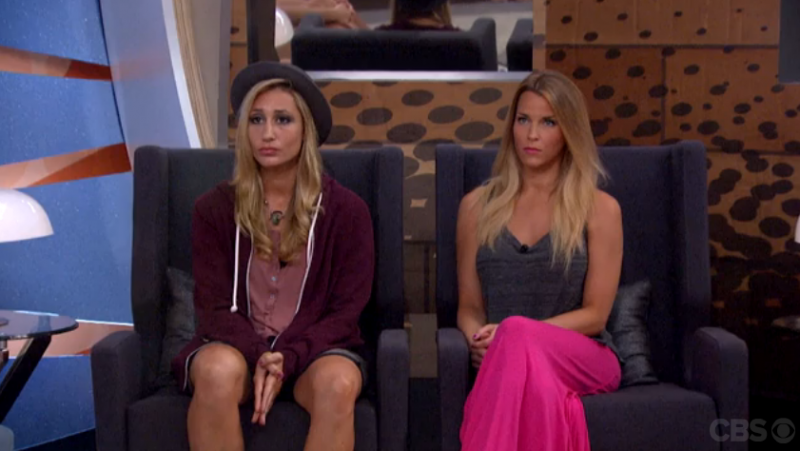 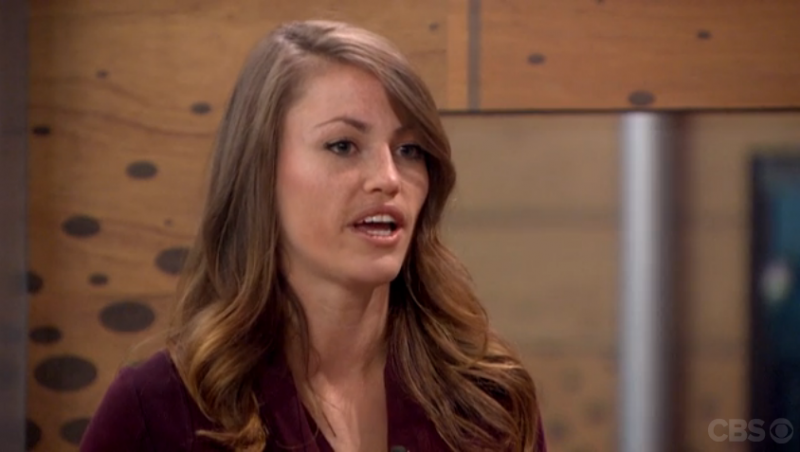 But the hits kept on coming.  Normally, that would be kind of enough to be told you’re the replacement nominee, but Becky wanted to make sure Vanessa knew EXACTLY why she’s up there.  And she did, unloading on Vanessa that her nomination is the direct result of all the betrayals she’s done to people who trusted her.  Vanessa can’t really defend that, can she?  She could say she was always loyal to her real alliance, but when you’ve pledged allegiance to people and then do that shady business to Jason, come on, you’re going to be surprised when they respond in kind?

Again, major props to Becky for not backing down from this action.  A lot of people, even at this stage of the game, are reluctant to make such a direct move against a target.  If you make it to the Final 2, this could be your argument for winning. 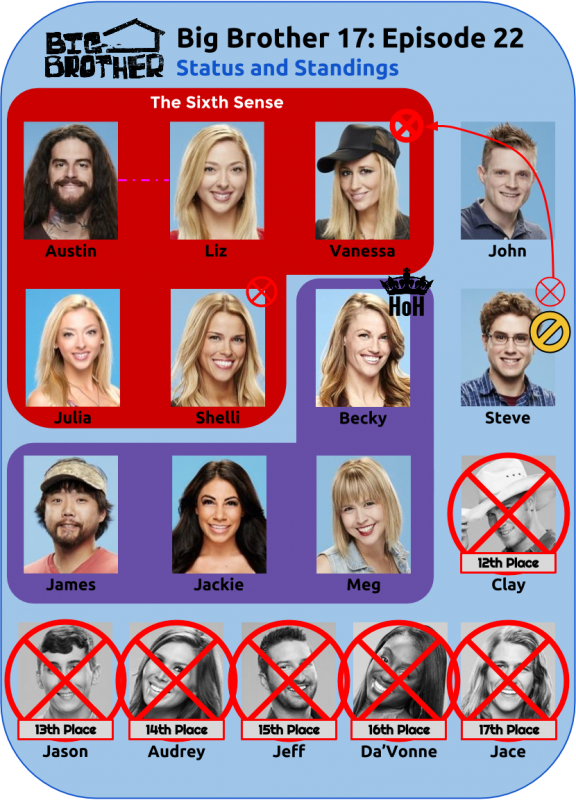 Well, it’s likely Vanessa is going home.  Disappointing that is the case, as she really had a strong shot in the first third of this game.  It seems it ended up being a bit of overplaying that did her in.  Make that many deals and welch on them almost constantly, and people will remember and get payback.

It seems that some kind of football sporting event is delaying tonight’s episode for us on the West Coast – so I won’t know who suffers the first eviction and the second eviction because of the Double Elimination night.  That second eviction could be anyone depending on who wins HoH, that’s for sure.  It sure would be awkward in the Jury House if Becky somehow gets sent home after Vanessa!