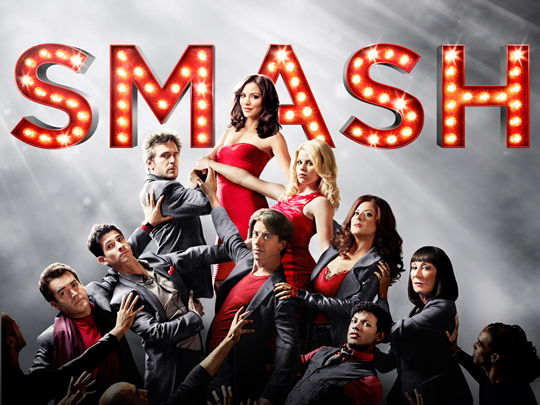 Alright, they probably aren’t going to fire me just over that, but seriously, watch SMASH.  It’s a fun, slightly soapy (okay, very soapy) show about making a Marilyn Monroe musical on Broadway.  It’s not too insider-y (which makes some critics sad and I admit, it would be cool to get a true look at the behind the scenes world of Broadway) and is very easy to watch and follow along with.  Some of the characters are absolutely awful, for different reasons.  The actor who plays the son of Debra Messing is positively the worst actor in television.  His dad or mom must be a producer, or else he slept his way into the show.  There’s no other excuse for him being on such a high-profile network show. The character of Ellis is a terrible character as well, as he’s just a villainous guy who always hears things he shouldn’t and is always in the wrong place at the right time.  Yet as opposed to a villain you kind of love to hate, he’s someone you just don’t understand why he does anything.  So it’s annoying.  With those particular quibbles out of the way, the talent on display is really the reason to watch SMASH.  The musical numbers are fantastic, and most of the cast is truly talented, especially Megan Hilty (who plays Ivy, one of the characters competing for the role of Marilyn) and Katherine McPhee (who plays Karen, the newbie making her big break in Broadway and who was also up for the role of Marilyn).

Anyway, watch the show, especially if you are a Nielsen family.  It’s been renewed for another season, yay!, so there’s hope it can improve its ratings.  A new showrunner is also coming on board for next season, so maybe he can ditch the terrible actor and figure out some better plot threads for these talented actors.  As a hint of the awesome numbers, here’s a clip below.  If a musical were actually made with these numbers, I’d go see it in a hearbeat!  Doesn’t hurt that the chorus boys are pretty hot.

In book stuff, since I last wrote about the Game of Thrones series, I’ve made serious progress forward.  Serious progress.  I’m now on Book 5, A Dance With Dragons, and I think the last time I wrote about it on this site, I was on Book 2.  They’re huge books and so much goes on!  Highly recommended series, and if you can, watch the HBO show too.  Freakin’ epic.  I also just received the latest Stephen King book, another entry in the Dark Tower series, set squarely between books 4 and 5.  Stephen King even says the new book, The Wind in the Keyhole, could be referenced as Dark Tower 4.5.  Haven’t started reading it and probably won’t till I finish ADWD, but I love having a queue of awesome books to look forward to.  Eventually I’ll have to read the last of Gregory Maguire’s Wicked series too. Anyway, I brought this up as the website Vulture.com ranked all 62 of Stephen King’s books.  I don’t agree with some of the explicit rankings (Rose Madder is not his worst book by a long shot) but overall, it’s a fun read.  Each book gets a paragraph or two about why it sucks or why it rocks, and those descriptions immediately transported my mind to my own experiences reading these books.  I think I’ve missed about 3 or 4 of his books, but everything else, I’ve been there.  I just re-read IT, which they ranked as #3, and it’s hard to dispute it.  I forgot how good that book was till I re-read it.