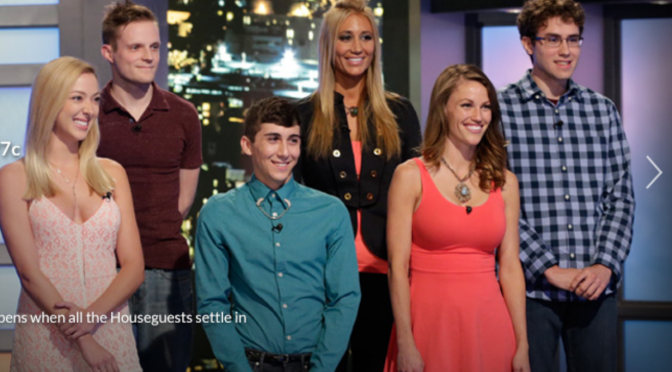 Well there was certainly a lot of energy released into the BB house in this second episode, wasn’t there? Â Not as if the first group didn’t have plenty to work with, but they all got along so quickly and easily. Â I predicted they’d saved some of the more “personality-filled” contestants for later, and dammit, I think I was right. Â I don’t have a giant collection of Clay screenshots for now… 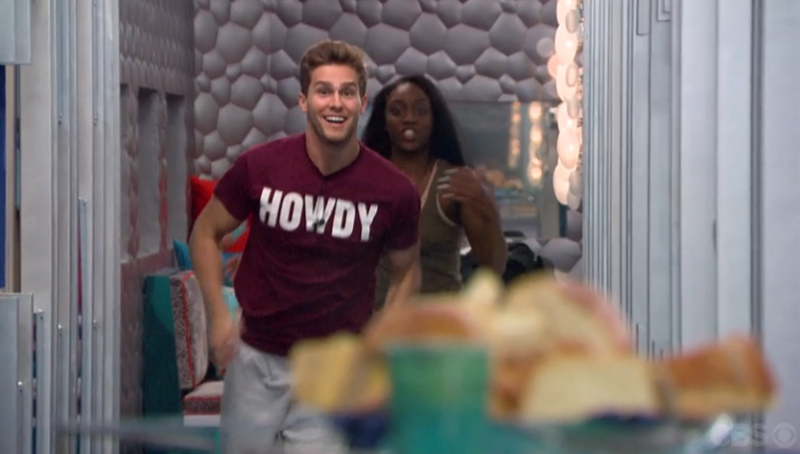 Ha, of course I’m going to have a picture of this Golden Retriever of a man running to answer the BB doorbell. Â I mean, come ON. Â And from the previews of upcoming episodes seen at the end, not only will we get to partake in the sight that is Clay’s body, but apparently Jace is rockin’ a super hot bod too. Â But let’s not spoil our future episodes just yet. Â Perhaps a competition is brewing again after all????

Smoky-voiced Liz from Miami grew on me almost immediately. Â She’s worried that jealous girls will be the main problem in the house. Â Not sure she’ll be welcomed into the blossoming girls’ alliance? Â Still, she wasn’t blind either and immediately feasted upon Clay when seeing him.

I had pegged her as being the one that would cause drama in the house, and she still may, but I’ve also liked Vanessa. Â She’s the poker player from Vegas and predictably lied about her profession, claiming to be a Vegas DJ. Â Also studied game theory at Duke – so that’s interesting. Â Could be a true player. Â Oh yeah, also bisexual!

Wow. Â I’ve never thought about what a gay man from Massachusetts would sound like, but now I know whether I wanted to or not. Â Personality for DAYS with this one and I honestly love it. Â If he can back up the sassy attitude with some fierce competition, and spoiler alert, looks like he can, he may improve upon Frankie’s role from last season. Â Very intriguing.

Oh. my. god….Becky….FINE I WON’T DO THE OLDEST AND MOST OBNOXIOUS JOKE REGARDING THE NAME “BECKY”. Â Take all my fun away. Â She seems very nice and relatable and from Colorado (or “Rado”, to absolutely no one but Jace) and my money is on her to be the secret Twin. No real reason except she’s got a look that could be kind of easy to duplicate to trick others?

Yeah, he may look a little nerdy with his Seth Rogen similarities, and slightly socially awkward, but honestly nothing too terrible. Â Honestly a lot more normal than people who will be super social in your face and be completely and absolutely fake. Â Clay may be right that he could be an “Ian” of this season, but let’s not be throwing praise like that just yet. 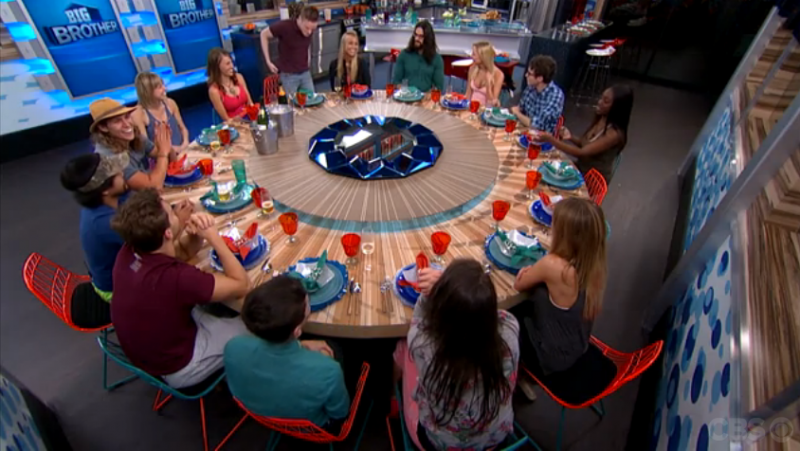 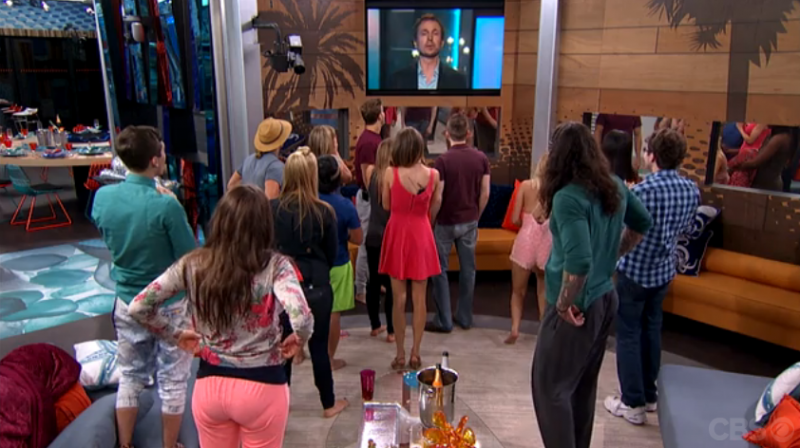 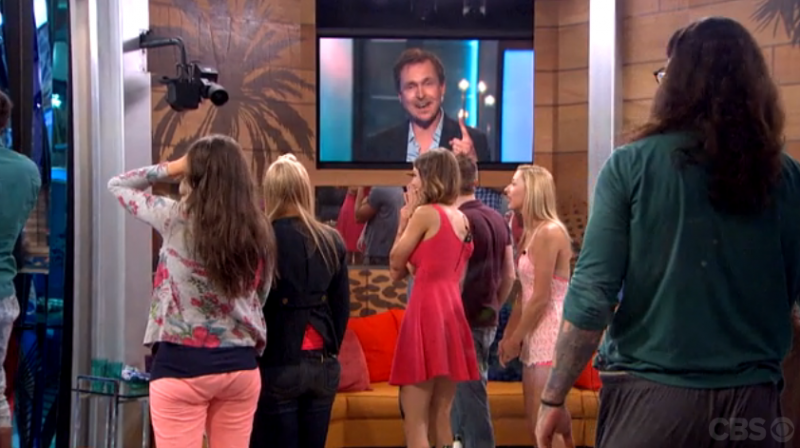 Phil and Julie had some nice chitchat (oh god make it stop) and traded clips aboutÂ Amazing RaceÂ borrowingÂ Big Brother contestants (namely Jeff & Jordan, Brendon & Rachel) and then showed us a clip from this past season of Amazing Race, the one I didn’t watch, of one of the “blind date” couples that looked to not exactly have hit it off. Â Turns out their initial attractions wasn’t long for the real world and they’re just friends, but into the house they go anyway!

I know close to nothing about Jackie since I didn’t watch her season of TAR, so all I have to go off of is her interactions this episode. Â She seems smart and crafty and athletic, and she rightly knows sheÂ and Jeff are huge and easy targets. Â Apparently a professional dancer?

I guess he’s kinda cute? Â Good shape, and looks to be ready to fit in with the guys well enough. Â He is somewhat strategically-minded though as he feels that Jackie is his to control. Â Not enough info yet to go off of, but he must know that he HAS to get in good with the new HoHs to avoid elimination.

So, with this BB Takeover thing, are Jackie & Jeff actually going to be here for the rest of the season, or is this a one-week deal? Â It seems pretty permanent, and if either get nominated, and they’re only temporary, that wouldn’t make any sense. Â Interesting.

More Snap Judgments, by Me!

Alright, so we’ve got all these yahoos in the house now. Â I don’t have a good sense of house dynamics just yet, nor is there any followup from the last episode about the girls’ alliance, but this was clearly another Introduction episode and some plotlines will have to wait their damn turn for resolution. 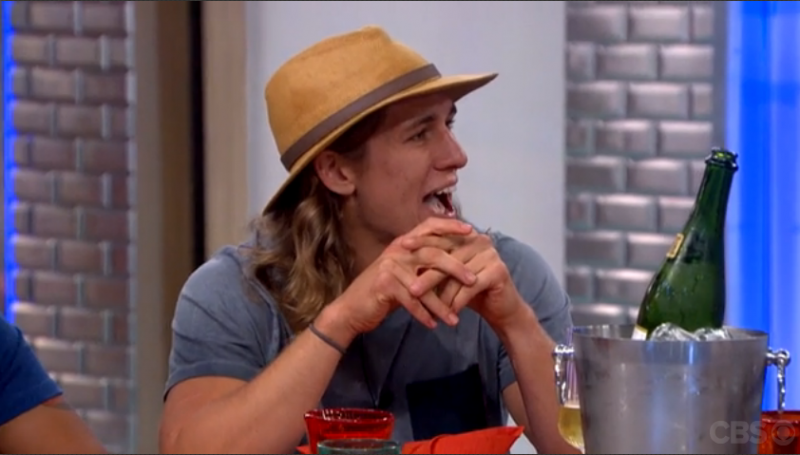 I guess that’s all the snap judgments I have for now? Â Next time, though!

Let’s Get Us a Second HoH! 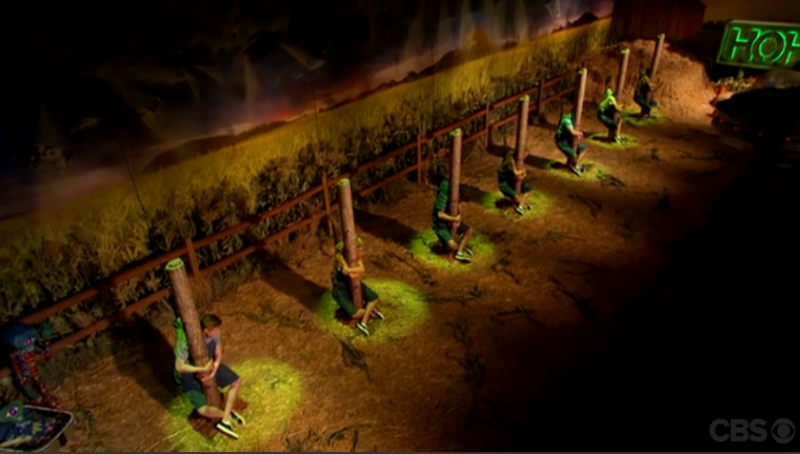 For setting the stage of this HoH, mad props to theÂ Big Brother Art Department. Â While it wasn’t easy to see the struggle the houseguests were enduring, it was pretty damn cool theming. Â As you can see above, each houseguest had to hang onto a pole (that’s what she said) as hard as they can (heh heh) before getting sucked into a black hole (bwahahahhaha) while green slime coats the pole to make it slippery. Â This shit writes itself. Â Anyway, the pressure kept increasing and more alien goo kept shooting itself at the houseguests. 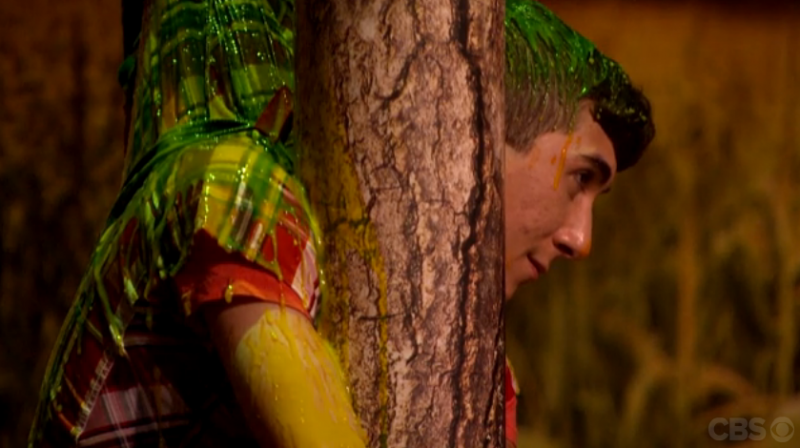 First, the guys were the first to go, except for little gay Jason. Â Then it was down to just Liz, Jackie, and Jason, and while Jason was firmly and comfortably gripping the pole at the base of the shaft, like a pro, the two girls started getting pulled up higher and higher. Â Kind of magically, Jackie was managing to cling to the tip of the pole for the longest time, almost tantric-like. 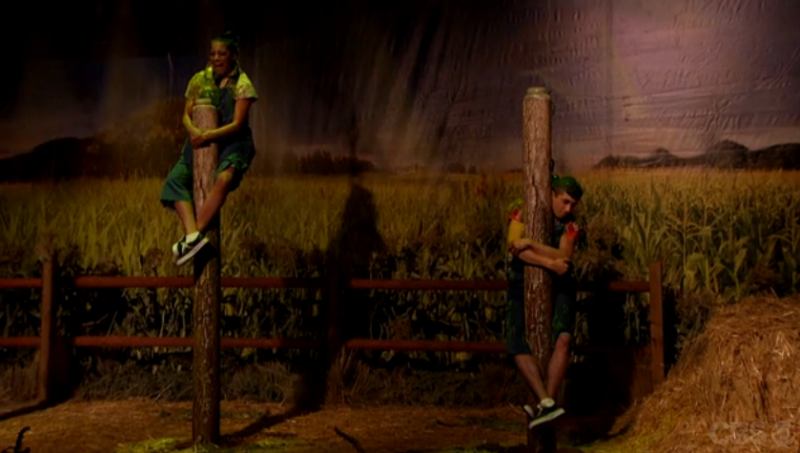 At this point, Jackie was struggling way more than Jason, but she was still hanging on and successfully. Â Jason tossed out a quick comment that she was safe so she might as well let go, and that led to a quick affirmation that he did indeed mean it. Â He tells her of course and with that, Jackie let go, with Jason winning HoH #2 for the week! 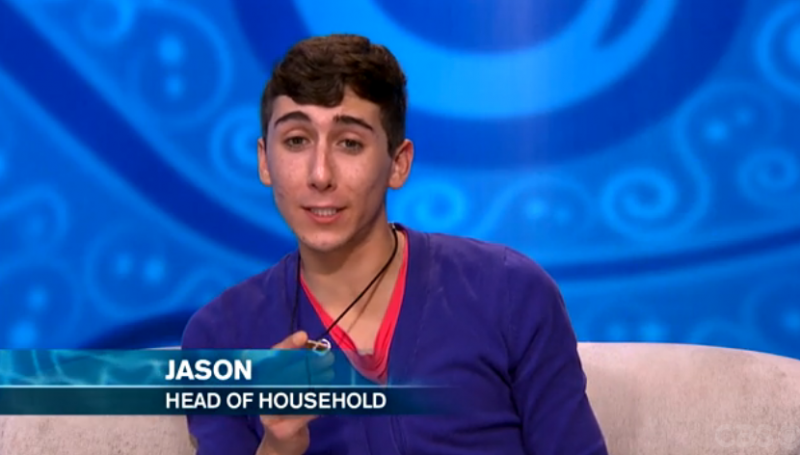 …And One More Thing 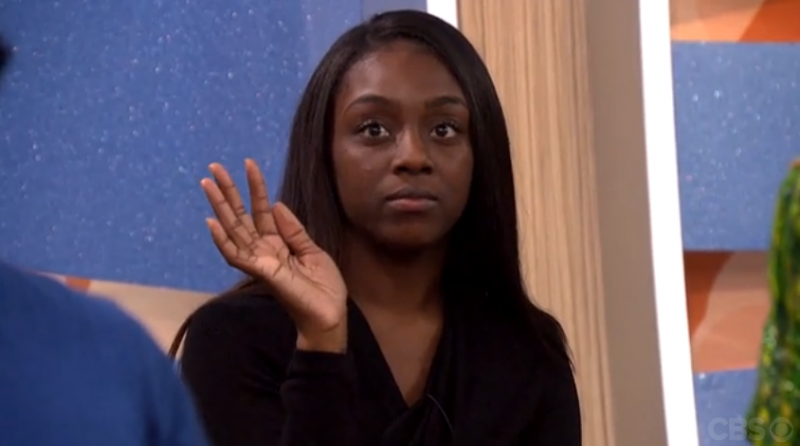 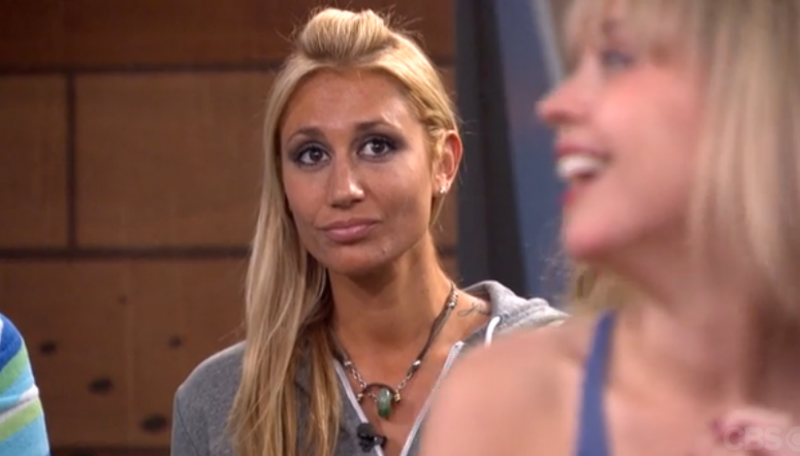 In yesterday’s competition, Da’Vonne took one for the team and dropped out of competing in the HoH competition, and in this episode, Vanessa stepped down after it was clear no one was readily going to volunteer like the first group. Â I kind of thought that it was a test and an opportunity to show your trust (in all directions) but that was it, but at the end of the episode, Phil indicated to the houseguests that with risk can sometimes come reward…but of course we aren’t told any more than that for now. Â So we’ve got the two (secret) Poker professionals having made a move that seemed relatively harmless and possibly beneficial to now being called out by Phil and saying there may be a real reward to their risk. Â Neither look pleased by this attention as it’s always “Expect the Unexpected” around these parts! 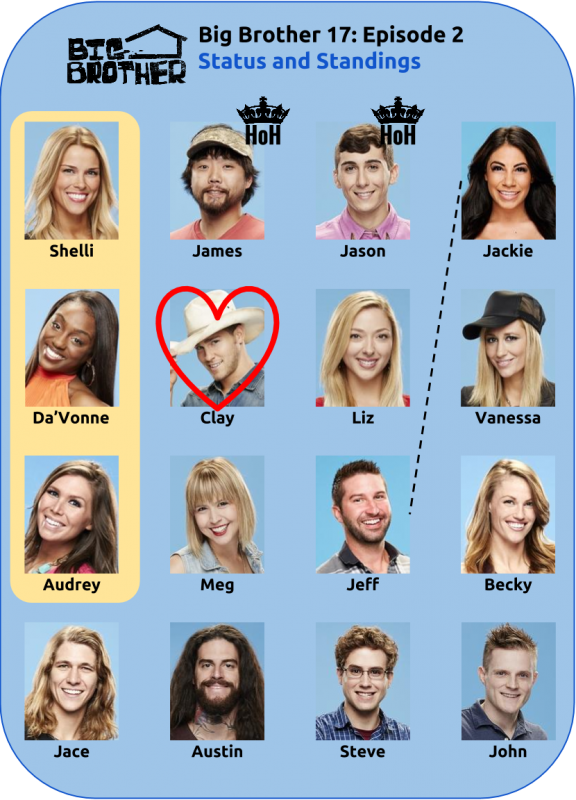 I kind of wiped away all my other lines from before as there’s no evidence in this episode that I was right by any means. Â I won’t erase the possible alliance there until it’s confirmed the girls can’t stand each other, which may be as early as the next episode! Â I am drawing a line between Jeff and Jackie as they both have realized they need each other to survive. Â Good luck to them!

So many “J” boys names! Â I think they’re all covered.