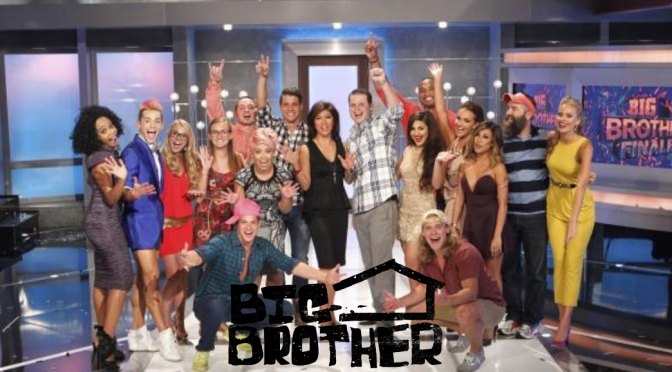 After what felt a superlong premiere episode of Survivor, we finally got to the good stuff! Â It wasn’t good stuff full of surprises, but certainly good stuff that made you feel okay with the world. Â Much like Ian’s win back in BB14, this was a victory you could live with! Â Last season, you just wanted to drop everyone in a vat of sludge and be done with it – even worse is hearing from Andy (BB15’s victor) in the time since. Â It’s just like, please, go away, and help us forget that BB15 even occurred! Â ANYWAY, it’s BB16 and all is good – we have a very deserving and worthy victor in Derrick, but let’s quickly recap the final leg of the path to victory!

Where Were We? Â Oh Yeah, Part 1 of the Final HoH! 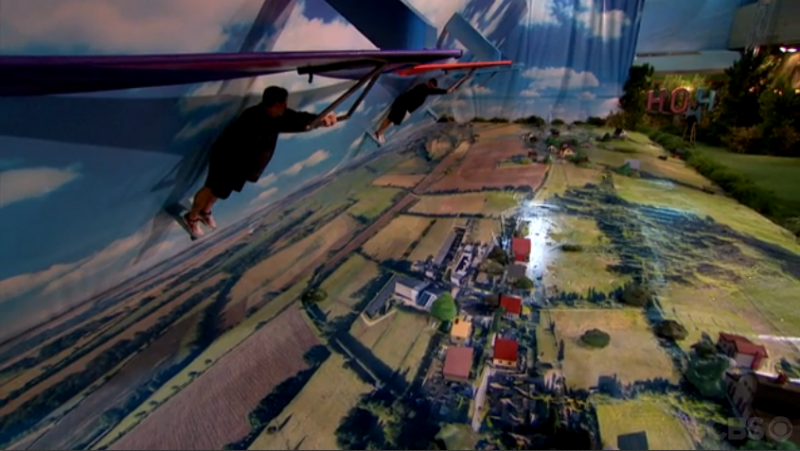 Victoria manages to stay in this competition for about 45 minutes, but it doesn’t end for another 30 minutes or so once Derrick realizes Cody isn’t interested in letting Derrick have this win. Â They had already agreed that if Part 1 was endurance-based, Cody would take it. Â Derrick almost went a little fishy here in Cody’s eyes, but in the end, Derrick stepped down finally (he was quite miserable though, just like Victoria had been) and Cody won Part 1, sending him straight to Part 3. Â On to Part 2 for Derrick and Victoria!

The Egyptian Memory Board Awaits in Part 2 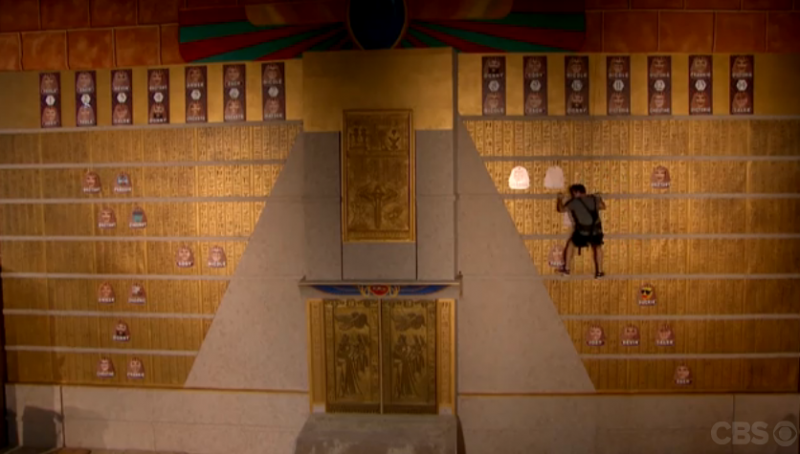 Another fairly spectacular challenge arena and epically themed with an overwhelming Egyptian motif, this challenge required the houseguest to climb all around the pyramid wall, uncovering tiles with faces on the other side. Â They then had to recreate, in order, the nomination block for each week when the eviction occurred (so none of the initial 4 nominees stuff, just the nominees after Veto). Â Still a challenging task though, but of course, Derrick crushes it at 15 minutes while Victoria admirably finishes but not until after 30 minutes. Â Sorry Victoria, your HoH hopes are done!

But First! Â Let’s Talk to the Jury! 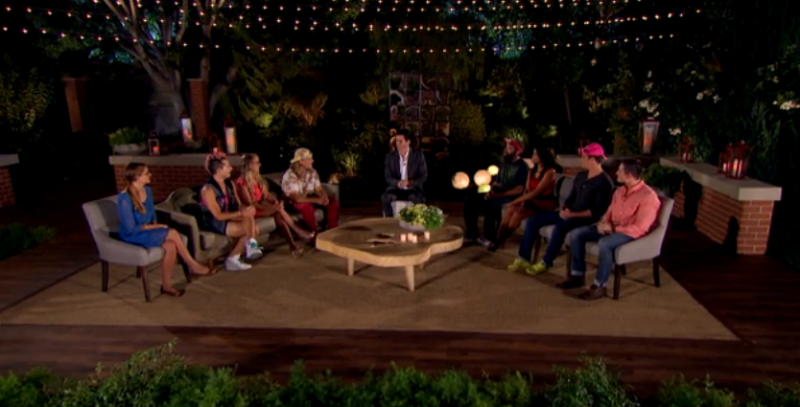 Since Part 3 was going to be played live, we then cut to the jury with Dr. Will Kirby awaiting Caleb’s arrival. Â Discussion goes around various topics like Derrick’s masterful play, Cody’s great social game, and Victoria’s near uselessness. Â Dr Will insisted that respect had to be given to her though as she IS still in the house while none of them were. Â Some surprising thoughts come out that if Victoria DOES make it to the Final 2, she’d get their votes. Â Kinda surprising, but bitterness manifests in many ways. Â Especially from Jacosta, it seems! Â Anyway, while there are points made for all three remaining houseguests, it really doesn’t seem like Derrick’s victory is in danger, at least not then. 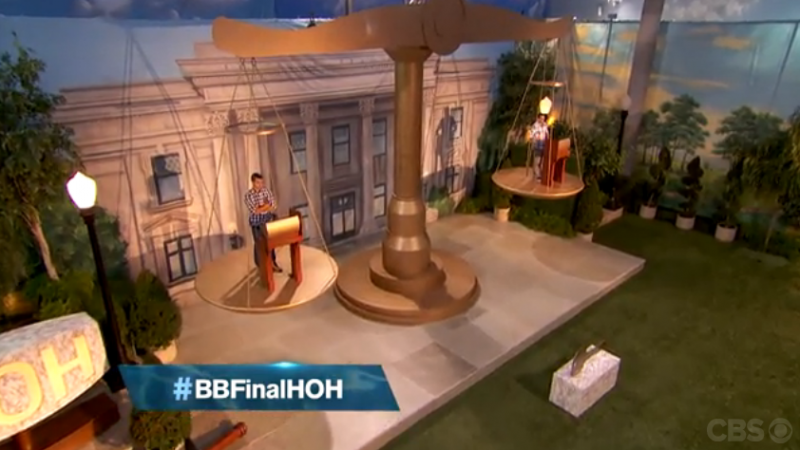 Eh, not really, but this challenge did seem to require lucky guessing as to what each houseguest was going to say. Â Some of these were very hard to figure out and it really did seem a crap shoot. Â I was wondering if perhaps Derrick was throwing the comp, but to me it wouldn’t make sense to do that at this point. Â Maybe he wanted to avoid pissing Victoria off and evicting her, but she’s only one vote. Â I really just think that both Derrick and Cody couldn’t answer these fakakta questions. Â In the end, they remain tied and have to do a tiebreaker question, where actually CODY FUCKING WINS HOH. Â This development threw me for a loop, as I was starting to wonder if perhaps Cody could think about actually winning the game and evicting Derrick.

Alas, that was not in the cards as Cody was ever-loyal to Derrick and evicted Victoria (finally). Â In retrospect, I’m glad he did that. Â From the interviews I’ve watched since the finale, it does seem that people would have seen taking Victoria as a cowardly move, to the point where they’d have voted for her over either Cody or Derrick. Â That’s a crazy idea, as it indicates people have respect for integrity! Â So farewell, Victoria, you were a useful vote and ally member and surprisingly not a goat! Â INSANE.

The Final 2 Plead Their Case 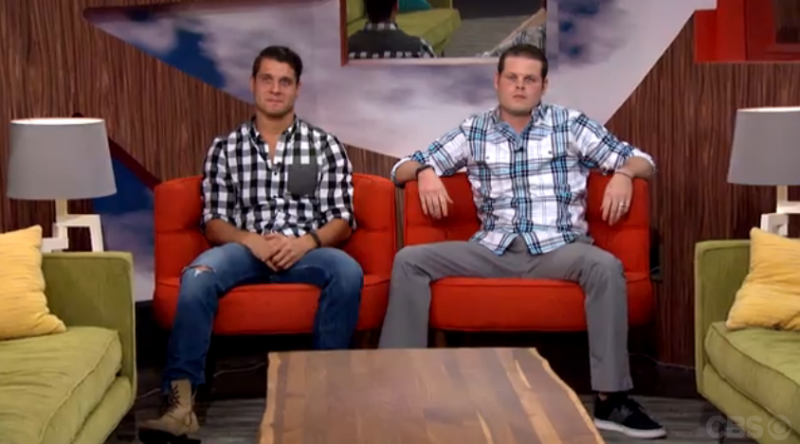 The jury got brought out and also got to see that Victoria was their final member, which probably surprised some. Â There was some Q&A and it was fairly benign except for Jacosta and Donny, which is probably the result of hurt feelings. Â What I noticed was that both seemed to be giving very short, curt answers. Â Not sure if that was due to Producer influence or if they just felt like to-the-point answers were a better strategy. Â Honestly, I’d have to agree – you can see firsthand here that rambling is never your friend! Â  Derrick does a great job and I actually felt that Cody did pretty good with the questions he had, but being asked if he felt like a puppet to Derrick’s puppetmaster clearly threw him off a little. Â Probably at that point was when he realized that he probably wasn’t going to win. Â And guess what? 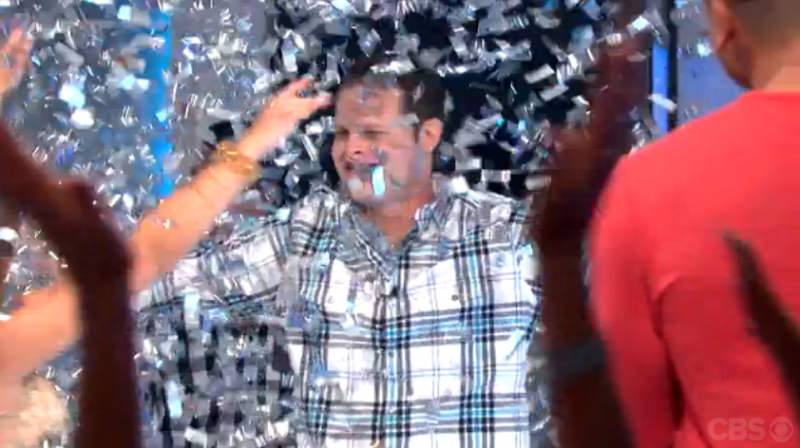 By a vote of 7-2 (Donny and Jacosta voted for Cody), Derrick is the deserving Big Brother 16 champion! Â I don’t think he made one wrong move this summer, and the jurors respected and rewarded that. Â People were always on Derrick’s side and they believed he was on theirs – even after getting played by him and evicted, they still didn’t have too hard of feelings. Â It was mostly recognized as gameplay, which is a very healthy attitude to have! Â I’m thrilled with the way it all played out this summer – as many online have said, it was a lot of fun to watch, BUT! The vast majority of these contestants were not exactly hard to beat. Â  Most were absolutely terrible at playing the game. Â That doesn’t take away from Derrick’s victory in the slightest, as his record of 55 non-nominations is ridiculously amazing. Â Plus, the fact is, his social game may not have been flashy, but he knew exactly who to be friendly with at the exact right time, and damn, that takes skill. Â So congratulations, Derrick! Â You completely and unabashedly earned this victory.

Miscellaneous Pics from the CBS site

The post-vote but pre-reveal show stuff was pretty fun, especially the shock on the faces of everyone as Team America’s actions truly came to light. Â You could see Zach get pissed a bit as he realized his game got super fucked when that all happened, and now he knew why. Â Loved it, and just wish that CBS could bring some more airtime to this “reunion” aspect of the show as it’s always compelling. Â And oh yeah, our America’s Favorite Player: 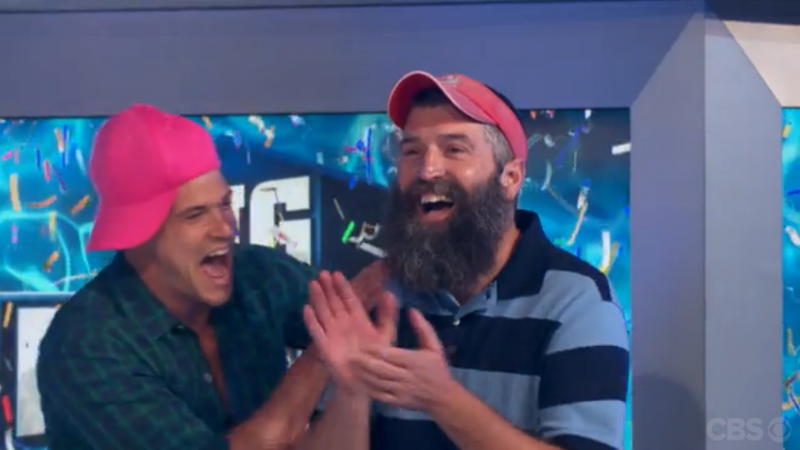 I’m happy that Donny won – he had a rough time of it in the house. Â That clip show from last week illuminated a little bit more of his isolation, yet I can’t help he did a lot of that to himself. Â Embracing your antisocial side in a game that is ALL social is a terrible terrible strategy, and feeling bad about it is just stupid. Â  You’re in the BB house – go force yourself to be social. Â Maybe you’ll learn something! Â Regardless, Donny’s sweet persona and underdog status and surprising challenge beast helped him win that $25K and I am thrilled for him too.

Another Big Brother season ending!!! Â It’s sad, but also kind of a relief. Â I’m ready to watch something else than these people, to be honest! Â Here’s hoping that next season can have a mix of these nicer personalities while having a bit more strategic-minded players. Â Whatever, I’m still watching the train wreck regardless. 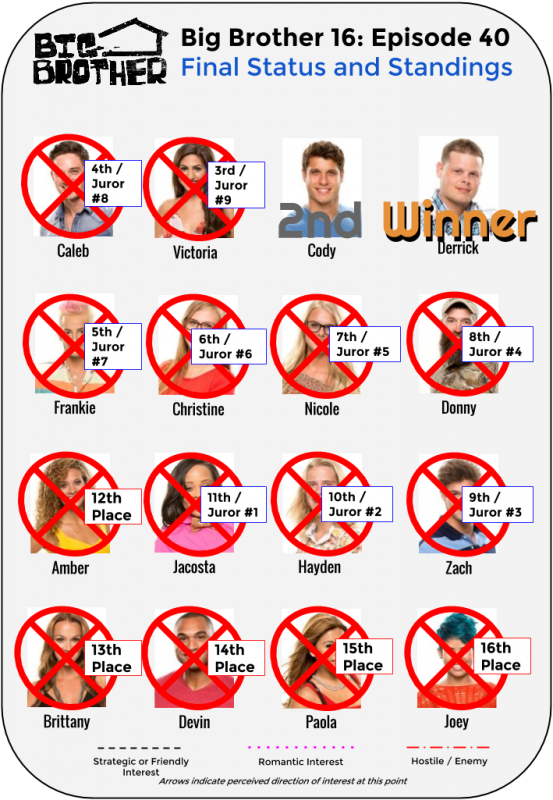